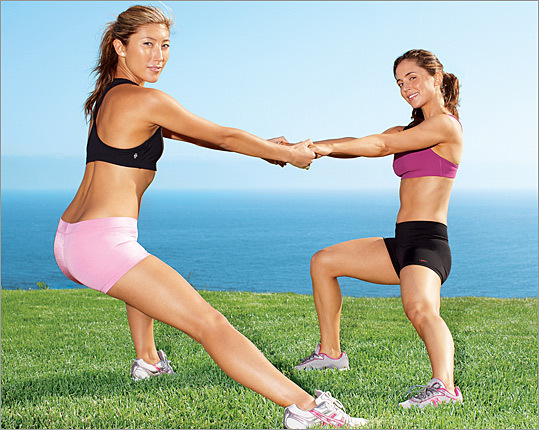 “Dollhouse’’ star Eliza Dushku breaks a serious sweat in the new issue of Self magazine, which hits stands later this month. The actress, who grew up in Watertown, does a multi-page fitness feature with her costar Dichen Lachman . The “Dollhouse’’ duo are photographed doing palm pats and belly busters. Says Dushku: “I’m addicted to endorphins: good, clean, healthy and free!’’

Brady makes it official
Tom Brady has finally confirmed what we already knew: His wife, Gisele Bundchen, is pregnant. In an interview with ESPN’s Chris Berman, Brady says the baby is due in December. “I told her . . . no Sundays,’’ said the Pats QB. (Brady has a son, John, with ex-girlfriend Bridget Moynahan.) Brady also jokes that he’ll participate in Lamaze classes with his supermodel spouse. “Well, it couldn’t be harder than this training camp, so I’ll be prepared,’’ Brady said. “The women are the ones who have to do the work, we just have to be there and support them, so it’ll be nice to do that.’’ The interview airs Sunday on “SportsCenter’’ and on “Monday NFL Countdown.’’
Ted Jr. talk to air
In an interview with “60 Minutes’’ airing Sunday, Ted Kennedy Jr. says his late father kept bulletproof vests in his closet. The late senator’s son tells Lesley Stahl: “Most people keep coats and umbrellas in their coat closet. My father kept bulletproof vests. . . . Believe me, we would walk past that coat closet every day, fearful about some crazy person out there wanting to make a name for themselves and that, I think, was in the back of our minds almost every time that my father would appear in public.’’
The height of respect
New Hampshire filmmaker Ken Burns previewed his new PBS documentary, “The National Parks: America’s Best Idea,’’ at the Museum of Science this week, and Barbara Washburn was there. Burns dedicated the screening to Washburn and her late husband, Brad, whose historic 1947 ascent of Mount McKinley is included in the doc. (Barbara, who lives in Lexington, was the first woman to scale North America’s highest peak.) Said Burns: “It’s one of the most beautiful scenes in the film.’’
A very heady affair
With the Anti-Defamation League’s dinner for George Regan now over, those giant billboards with George’s head will finally come down. Thank goodness. At the event at the JFK Library, during which Regan received the ADL’s Distinguished Community Service Award, George said he had nothing to do with the billboards on I-93. If he had, he joked, his face would’ve been even bigger and illuminated so it could be seen day and night. Oy. In attendance was a who’s who of local business and political types, many of them Regan clients. The crowd included Congressman Bill Delahunt, Senate President Therese Murray, House Speaker Robert DeLeo, Treasurer Tim Cahill, Secretary of State Bill Galvin, Hizzoner Tom Menino, Pats owner Bob Kraft, Celts co-owner Bob Epstein, SBLI prez Bob Sheridan, Suffolk Construction founder John Fish, Bank of America’s Bob Gallery, nightlife nabob Patrick Lyons, and former ambassador the Rev. Charles Stith.
They’re good sports
Sox reliever Manny Delcarmen was the man of the hour at Good Sports’ annual “Legends of the Ball’’ event at Roxy. (Good Sports is a Boston-based nonprofit that aims to increase young people’s participation in recreational programs by improving access to equipment.) One of the auction items was a backyard Wiffle ball game with Nick Green, and it went for big money thanks to Victor Martinez, who jumped on stage to spur the bidding.
The sweetest thing
Actress Cameron Diaz paid a surprise visit to Mattapan yesterday, joining a group of do-gooders to spruce up around the Young Achievers Pilot School. Diaz, who’s in Boston for the next few months to shoot a movie with Tom Cruise, lent a helping hand along with Celtics Bill Walker, J.R. Giddens, and team owner Wyc Grousbeck, and several folks from Harvard Pilgrim Health Care and City Year. Afterward, Walker and Giddens led a basketball clinic, and the C’s dance team director, Marina Ortega, showed students how to strut their stuff.
Calls to service? Music to their ears.
Most young bands would be satisfied to sell a few CDs. Not so Thirteen Yards to Victory, the North Shore pop-rock combo whose inaugural EP comes out Tuesday. (The band, managed by Fred Balboni, is hosting a CD release party tomorrow night at the Hard Rock Cafe.) The collection, called “American Dreamers,’’ is being distributed by TuneCore, and 100 percent of the profits from the digital download will benefit art and music education programs around the US. The idea, says bassist Dave Rossi, was inspired by the calls to service made by President Obama and the late Ted Kennedy. “It’s a hard economy,’’ says Rossi, a graduate of Saugus High. “Music and the arts are usually the first to go when school budgets get cut.’’ The band was helped in the studio by producer Ken Lewis, an industry heavyweight whose clients have included Kanye West, Usher, and Mariah Carey. Relative to some of the big-name stars with whom he’s worked, Lewis said 13YTV was a pleasure to deal with. “I don’t think ‘easy to work with’ would be correct,’’ said Lewis. “They just worked really hard and did everything I asked of them.’’ Lewis, who likens the band to Blink-182 and Taking Back Sunday, said his work is done. “I’m just the guy that makes sure it sounds good,’’ said Lewis. “It’s up to them to get out there, play, and promote it.’’