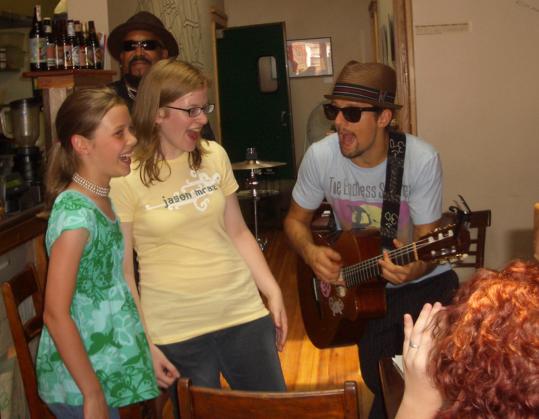 Singer Jason Mraz, in town for two shows at the Pavilion, surprised and delighted customers at the 303 Cafe in East Boston yesterday with an impromptu performance. . . . Harry Wayne Casey of KC and the Sunshine Band dined at Union Oyster House last night before heading off to see Sir Paul. . . . Also in attendance at Fenway was David Spade.

Le Cordon Bleu culinary schools across the country this week celebrated the release of “Julie & Julia’’ by hosting a four-course dinner inspired by the film starring Meryl Streep as Julia Child. At Technique, the restaurant at Le Cordon Bleu in Cambridge, students served up the French Chef’s favorites, including boeuf bourguignon. After their meal, guests got a special screening of the movie in Harvard Square.

Parenteau is noticeably absent in 'BCN sendoff
Charles Laquidara is having second thoughts about participating in the four-day farewell to WBCN that starts tomorrow morning. The legendary former disc jockey, a centerpiece of the marathon sendoff, is upset that former jock Mark Parenteau is not invited to take part. “Mark’s one of the key figures, and we’re not allowed to mention him. His name’s been wiped out,’’ said Laquidara, who hosted “The Big Mattress’’ show back in the day. “I feel like a whore and a hypocrite doing [the farewell] because it’s not being handled in the ’BCN spirit.’’ After 40 years, the station is about to switch to an all-sports format, but before that happens, virtually everyone with a connection to WBCN is participating in the long goodbye. The station’s promising on-air appearances by Ken Shelton, Howard Stern, Billy West, Steven Clean, Albert O, Bradley Jay, James Montgomery, Sam Kopper, Mississippi Fats, Ray Repien, Maxanne Satori, Shred, Mark Hamilton, Bill Abbate, DickyBarrett of the Mighty Mighty Bosstones, Greg Hawkes of the Cars, Robin Young, Carter Alan, Oedipus, Jerry Goodwin, Steven Nelson, Nik Carter, Tami Heide, Cha-Chi Loprete, Jay Leno, Steven Strick, and Tony Berardini, among others. Parenteau’s not the only person excluded - Peter Wolf, Opie and Anthony, and former ’BCN DJ Matt Siegel are also not on the list - but he’s perhaps the most notorious. The station had no comment yesterday, but it’s likely that Parenteau’s past legal troubles are the reason he’s persona non grata. In 2004, he was convicted of one count of child sexual abuse involving a 14-year-old boy, and sentenced to three years in prison. (Parenteau declined to talk to us yesterday.) ’BCN marketing man Loprete said the four-day farewell will be more fun than funereal, and include snippets of ancient interviews with Bruce Springsteen, U2, and Bill Murray.

Tyler recuperating after fall from stage
Aerosmith’s Steven Tyler is recovering from head, neck, and shoulder injuries suffered when he fell from the stage at a show in South Dakota Wednesday. Tyler, 61, was dancing on a catwalk when he suddenly stumbled and fell into the crowd. Tyler was doing the impromptu dance to entertain the crowd after the sound system failed. The audience at South Dakota’s famed Sturgis Motorcycle Rally thought the fall was part of the act until the singer didn’t get up. Tyler, who missed several shows last month with a leg problem, was airlifted to Rapid City Regional Hospital, the largest hospital in western South Dakota. At noon yesterday, Joe Perry’s wife, Billie, told Aerosmith fans via Twitter that Tyler was still hospitalized. “So so worried,’’ she wrote. “We should be hearing a report momentarily regarding his outcome.’’ The singer apparently landed on a couple of fans in the crowd, and security helped him backstage. Tyler was at Sturgis earlier in the week to promote his Dirico Motorcycles line.
Sir Paul enjoys his stay
Paul McCartney and his girlfriend, Nancy Shevell, took a bike ride around the Back Bay yesterday. (Unlike Pats QB Tom Brady, Sir Paul and his paramour wisely wore bicycle helmets.) We’re told McCartney, who’s staying at the Four Seasons while in town for two shows at Fenway, was gracious to the gawkers who gathered outside the hotel hoping to get a glimpse of rock royalty. After Wednesday’s show, the former Beatle promptly returned to the hotel. (Meanwhile, Macca’s opening act, MGMT, partied post-show at Eastern Standard with Alex Turner and the lads from Arctic Monkeys, who played a sold-out show at the Paradise.) Sox owner John Henry, who was in the second row at Wednesday’s show with wife Linda, ventured afterward to the Kowloon with BFF Ed Kane, Sox vice chairman David Ginsberg, and several others.