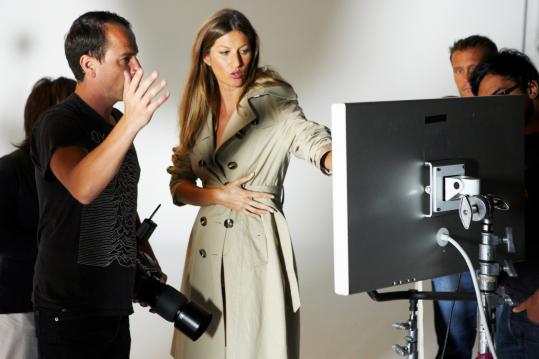 Gisele Bundchen’s pregnancy has been confirmed by the strangest of sources - the coat company London Fog. Bundchen and hubby Tom Brady have been unwilling to admit they’re with child. But London Fog - which hired Bundchen to model its fall line - released a statement yesterday saying that photos for its ad campaign that show Gisele with a perfectly flat tummy were “retouched to respect her privacy during this wonderful and personal time in her life.’’ Dari Marder, London Fog’s chief marketing officer, goes even further, saying in the release, “Nobody is sexier or more beautiful than Gisele Bundchen in nothing but a London Fog trench coat, even with her visible baby bump.’’ Translation: there is a bump, but you’re not allowed to see it.

Actor turns up ace in the Hole

Actor Joe Pantoliano tells us he’s proud to be honored by the Woods Hole Film Festival tonight - now that he knows what Woods Hole is. “When they first told me Woods Hole, I thought they were calling me an [expletive].’’ Pantoliano will be honored with the Saint Aire Award for promoting the understanding of mental illness in his documentary “No Kidding, Me Too!,’’ which will screen at 7 p.m. Pantoliano tells us he’s had overwhelming support for the project. Members of his foundation’s advisory board include Marcia Gay Harden, Robin Williams, and Harrison Ford. “People say, ‘My God, Joey, I didn’t want to see a movie about mental disease, but it was so funny.’ It’s not meant to be a downer.’’ Pantoliano told us he’d be staying at the Mandarin Oriental one more night before heading to Woods Hole today. Apparently, he’s fallen in love with the hotel bedding. “The Mandarin has got the best beds,’’ Pantoliano said, adding wistfully, “The [expletive] sheets.’’ Pantoliano will accept his award from his pal Christy Scott Cashman.
Updike house sold

John Updike’s widow Martha has sold the family home in Beverly for $2.5 million, the Salem News reported yesterday. According to the Registry of Deeds, the home was purchased by Molly Ryan, who, according to public records, owns another property on Hale Street near the Updike land. Ryan did not return a phone call yesterday. Updike, who died in January, lived in town for decades and was a regular around Beverly Farms. A realtor familiar with the sale told the Globe the Updike property sold quickly, has gorgeous views, and it’s “a perfect place to write a book.’’

Former Globie Anthony Flint, who now works at the Lincoln Institute of Land Policy, hosts a party tonight to celebrate his new book, “Wrestling with Moses: How Jane Jacobs Took On New York’s Master Builder and Transformed the American City.’’ Word is that the story - which Flint describes as an Erin Brockovich-type tale - has been optioned by HBO, and that James Gandolfini is set to star as developer Robert Moses. The invite-only bash is at Tory Row in Harvard Square.

Robert J. Orchard, who retired as executive director of the American Repertory Theater in June, has been named Emerson College’s first executive director of the arts. “Rob has tremendous vision and exciting ideas about the ways in which Emerson can expand our already many great contributions to the performing arts and to the cultural vitality of Boston,’’ Emerson College President Jacqueline W. Liebergott said in a statement.

Much-celebrated former Soxer Jim Rice took questions from fans yesterday afternoon at Fenway-area sports bar Game On! . . . Kid Rock, who was on hand to watch the Red Sox honor Rice at Tuesday night’s game, partied it up later that night at the Estate with pal Peter Wolf, Josh Beckett, and club owner Ed Kane. Rumor has it that Kid Rock gave Beckett a guitar lesson the night before. . . . Comedian Jim Gaffigan was spotted dining at American Seasons on Nantucket. Gaffigan was on the island to perform as part of the Nantucket Comedy Festival, where he joked to the audience, “It’s great they’re raising money for Nantucket - a lot of these buildings look really old.’’

AC/DC, which played to a number of celebs on Tuesday night (see the review, below), checked out of the Four Seasons yesterday only to check back in a few hours later after learning about cancellations and delays at Logan Airport. The band shouldn’t be in too much of a rush to leave Boston. Its next gig isn’t until tomorrow at Giants Stadium.

New Kids in the news

Some New Kids on the Block news: The group reports on its website that Donnie Wahlberg has joined the cast of “The Zookeeper,’’ the Kevin James movie that’s being shot at the Franklin Park Zoo. Also, New Kid Jordan Knight was spotted dining at Burton’s Grill yesterday in Hingham.

Out with Gisele and Tom

Gisele's 'baby bump' and more news and photos of the duo