Entertainer of a generation was mounting comeback 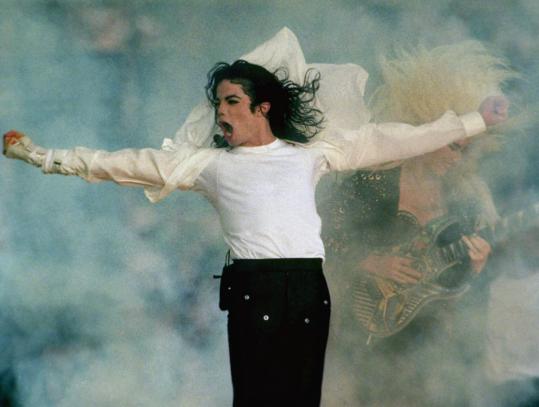 Michael Jackson was the biggest entertainer of his time, and his popularity endured a quarter-century after his peak. (Rusty Kennedy/Associated Press/File 1993)
By Sarah Rodman Globe Staff / June 26, 2009

Michael Jackson, the child singer who became the world’s biggest pop star before his personal life became grist for the tabloids, died yesterday at the age of 50.

The self-proclaimed “King of Pop’’ was rushed from his home in Los Angeles to UCLA Medical Center shortly after 12:30 p.m. by paramedics who reportedly performed CPR in the ambulance.

The Los Angeles Times reported that Mr. Jackson was not breathing when paramedics arrived at his house in the Bel-Air neighborhood, and other outlets reported that he died of cardiac arrest. Police robbery-homicide detectives were ordered to investigate, which is common in a high-profile case, and they began searching the home.

Mr. Jackson’s death came weeks before what was expected to be a major comeback for the star, who had lived mostly out of the spotlight since his acquittal on charges of lewd conduct with a child in 2005. He was scheduled to play 50 concerts at London’s O2 arena beginning next month and running through early 2010. Concerns about his health and ability to endure such a rigorous performance schedule were allayed in March when the concert’s promoter, Live, said he had undergone a 4 1/2-hour physical examination.

With such monster hits as “Beat It’’ and “Billie Jean,’’ Mr. Jackson was the biggest entertainer of his time, and his popularity endures a quarter-century after his peak. His 1982 album “Thriller’’ has sold more than 100 million copies worldwide, making it the best-selling album of all time. His dance routines were as compelling as his music; kids grew up trying to mimic his signature dance, the moonwalk.

Mr. Jackson influenced a generation of singers and songwriters, but later his phenomenal success was overshadowed by his eccentric behavior. He kept a chimp named Bubbles as a companion, often wore a surgical mask in public, and once wore pajamas to court. His appearance was a constant source of controversy as well; his skin color got lighter, and his nose got increasingly slimmer.

Fans across the world mourned publicly. They gathered outside the hospital in Los Angeles, at his childhood home in Gary, Ind., and in New York’s Times Square, where people watched the news on the Jumbotron. Television stations as far away as Tokyo interrupted their broadcasts with news of Mr. Jackson’s death.

As word of his death spread, members of the entertainment community offered praise for his legacy and condolences to his family through statements and Twitter updates.

“I am absolutely devastated at this tragic and unexpected news,’’ said Quincy Jones, his longtime friend, mentor, and producer. “For Michael to be taken away from us so suddenly at such a young age, I just don’t have the words . . . He was the consummate entertainer, and his contributions and legacy will be felt upon the world forever. I’ve lost my little brother today, and part of my soul has gone with him.’’

Singer-songwriter John Mayer tweeted: “Dazed in the studio. A major strand of our cultural DNA has left us. RIP MJ.’’

“Every generation has its icons, and the MTV generation has just lost its first big icon,’’ said a stunned Joe Cortese, host of the long-running show “Back to the ‘80s Friday Night’’ on Mix 98.5 (WBMX-FM). Cortese plans to devote an hour of tonight’s program to Mr. Jackson.

Michael Bivins, a member of the Boston-bred group New Edition, which was modeled after the Jackson 5, said he considers Mr. Jackson “the musical Barack [Obama]. He brought us all together.’’ Bobby Brown, another member of New Edition, learned of Mr. Jackson’s passing as he was boarding a flight. His girlfriend, Alicia Etheridge, said the R&B singer was “in disbelief.’’

Davis spent eight months interviewing the pop star at the Jackson family estate in Encino, Calif. The interviews were often conducted in Mr. Jackson’s bedroom, said Davis, and a 12-year-old boy known as “Rubba’’ was almost always present. “It was like Batman and Robin,’’ Davis said. “We’d have lunch served by white-turbaned people and watch movies like ‘To Kill a Mockingbird’ over and over again.’’

The multiplatinum superstar, who was enshrined in the Rock and Roll Hall of Fame in 2001, was born Michael Joseph Jackson in Gary, Ind., on Aug. 29, 1958, the seventh of nine children to Joseph, a steelworker, and Katherine Jackson.

His musical gifts were obvious even in his childhood, and his father included him in the group he was forming with the older brothers. The group, the Jackson 5, signed to Motown, the vanguard label for black pop music. Led by 11-year-old Michael, the group rocketed to stardom in the 1960s and ‘70s with a string of winning and often danceable hits including “I Want You Back,’’ “ABC,’’ and “I’ll Be There.’’

Although he recorded several solo albums as a child, Mr. Jackson set out for a serious solo career with “Off the Wall’’ in 1979 and cemented his status with 1982’s blockbuster “Thriller,’’ which sent seven of its nine tracks to the Top 10, including his biggest hits, “Billie Jean’’ and “Beat It.’’

Mr. Jackson’s videos were among the first by a black artist to be played on MTV. They were elaborately theatrical; the 14-minute video for the song “Thriller’’ is still widely considered to be the greatest ever made. Mr. Jackson also dabbled in acting, starring as the scarecrow alongside Diana Ross in the 1978 film version of the Broadway musical “The Wiz.’’

Following up the success of “Thriller’’ proved stressful for Mr. Jackson. His offstage behavior, including changes to his appearance, and his preference to spend time with children made him a target for the tabloid media, to the point where he recorded the song “Leave Me Alone.’’

In 1993, allegations of child molestation emerged. He wasn’t charged, but two years later he settled out of court with the family of the 13-year-old boy. In 1994 he married Elvis Presley’s only child, Lisa Marie, but the marriage ended less than two years later. In 1996 he married nurse Debbie Rowe, with whom he had two children; the couple divorced in 1999.

Mr. Jackson was accused of molesting a second 13-year-old boy in 2003, and this time he was charged with lewd conduct with a child, though in 2005 he was acquitted of all charges.

After that, he largely avoided the media. There were occasional updates that he was at work on a new album, but no new music has been released. In a brief press conference this March, he announced he would perform 50 concerts in London, calling it his “final curtain call.’’

Mark Shanahan and Meredith Goldstein of the Globe staff contributed to this report. Wire material was also used.