A whale of a fashion show 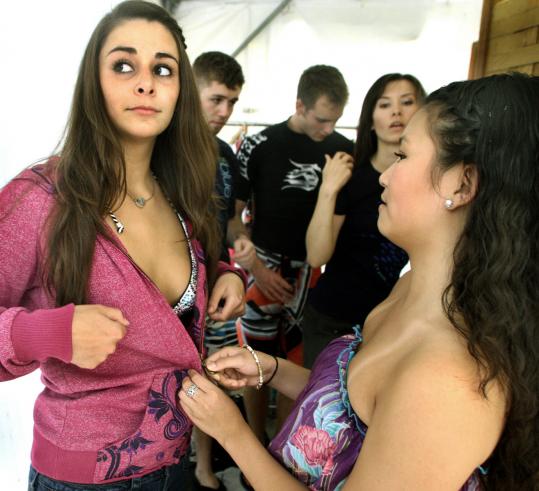 The sun came out just in time for Boldfacers gal Lisa Pierpont to emcee a fashion show at the New England Aquarium’s outdoor restaurant the Reef last night. Not surprisingly, the Aquarium went for a blue carpet for VIPs (as opposed to a red one). Fashion came courtesy of Boston’s Sun Spot in Faneuil Hall.

As you can see, Matt Damon has gone bleach blond to play rugby star Francois Pienaar, the guy responsible for helping South Africa win the rugby World Cup in 1995. This photo was recently taken on the set of “Invictus,’’ Clint Eastwood’s film about the Cup, in which Morgan Freeman will play Nelson Mandela. According to Seth Rotherham, who originally posted this picture on his popular South African blog, Damon is well liked around Cape Town. “Friends of mine involved in the movie say Matt is a complete gentleman and has won over everyone,’’ Rotherham told us. The blog writer added that Damon has developed a love for a South African brew called Jack Black Beer. He must not be able to find Sam Adams or Harpoon down there.
Security tight for Henry wedding
Don’t expect camera-phone images of John Henry and Linda Pizzuti’s wedding to show up on the Internet this weekend. Employees working the Saturday-night reception at Fenway Park have been forbidden from bringing cellphones to the event. As we told you earlier this week, Maroon 5 has been booked to play the ballpark reception, which is expected to draw about 450 of the couple’s closest family and friends. Party planner extraordinaire Bryan Rafanelli, whose clients have included Boston Ballet, the Cam Neely Foundation, the New England Patriots, and Louis Vuitton, is producing the grand affair. This won’t be the first time Rafanelli has decorated Fenway. Just a few years ago, for a Mass. General Hospital for Children benefit, Rafanelli adorned the Red Sox bases and pitcher’s mound with daisies and sunflowers.
Family: Cronkite very ill
Walter Cronkite’s family has weighed in on the reports of the longtime newsman’s failing health. Family members have told the New York Post that Cronkite, 92, “is not expected to recuperate’’ from his illness and that he is surrounded by “family, friends, and a wonderful medical team.’’ Last week, Cronkite’s executive assistant Cynthia Dicrocco denied reports that Cronkite was “gravely ill’’ and near death.
Kennedy ready to roll
Jamie Kennedy promises that nothing will stop him from performing at the Wilbur Theatre tonight - not even a pesky kidney stone. “It hurts,’’ Kennedy told us, referring to the stone that forced him to cancel his gig at the Wilbur in March. “You’ve got to wait to pass the thing. Something so big shouldn’t have to go through a hole that small.’’ Kennedy hinted that Jennifer Love Hewitt, his girlfriend and “Ghost Whisperer’’ costar, will probably be in Boston for the performance. The comedian admits that his high-profile relationship with the actress has been good comedy fodder. Some of his routine tonight will focus on what it’s like to read about his own romance in the tabloids. Kennedy confessed that when he started dating Hewitt, he saw a headline that said, “Jennifer Love Hewitt scrapes bottom of the barrel.’’ Yikes. “I thought Gary Busey was the bottom of the barrel,’’ he joked. Kennedy also claims that he may wear something to the show that Hewitt “BeDazzled’’ for him. Apparently, Hewitt owns a BeDazzler, which affixes metal studs and rhinestones onto fabric. “She’ll take my regular shirts and BeDazzle them.’’ Ah, young love.
Antisocial networking
Framingham native Nancy Travis, who called us yesterday to hype the new season of her TBS series “The Bill Engvall Show’’ (new episodes start July 18), admitted that she never gets to the Metrowest anymore. Her family relocated to California, so there’s no reason for a homecoming. Travis said she did recently join LinkedIn to find old high school pals, but after making contact with a few old cronies, she canceled her account. Too many people were coming out of the woodwork. Not surprisingly, Travis is anti-Facebook. “Are you kidding me?’’ Travis said. “Bill Engvall is on Twitter, and I think, what are you doing?’’
Liv listens in
Liv Tyler was on hand to watch mom Bebe Buell debut a new song, “Air Kisses for the Masses,’’ at Hiro Ballroom in New York on Wednesday. Buell, a former Mainer, promises a full album sometime this summer.