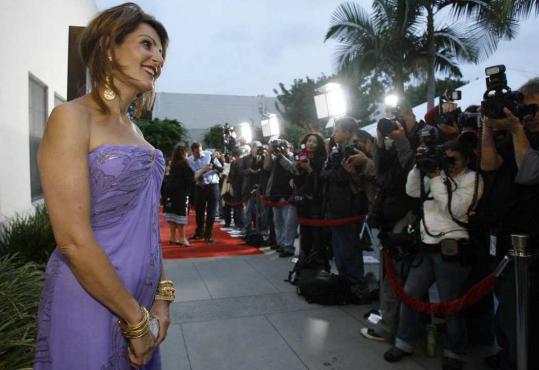 Nia Vardalos at a screening of ''My Life in Ruins,'' in which she plays a tour guide. (Mario Anzuoni/Reuters)
By Rachel Abramowitz Los Angeles Times / June 11, 2009
Text size – +

"I find it strange being mentioned as some sort of accomplishment or triumph," says Vardalos, the unlikely writer-star of the unlikely box-office smash of 2002, "My Big Fat Greek Wedding." The only reason she bothered, she says, is because her doctor insisted, due to "a blood sugar issue," as well as thyroid disease, and diabetes in her family tree.

"To be told you have to do something, what a bummer," she says.

It's clear that Vardalos doesn't like being told what to do or adhering to some Hollywood conventions. This is the woman who wrote her own ticket into Hollywood, after being infamously told by an agent that she wasn't pretty enough to be a leading lady or fat enough to be a character actress.

"I'm like this everywoman in terms of my looks," Vardalos says over a glass of iced tea. "I had to write my scripts in the first place because I don't look like Nicole Kidman. I continue to write parts I want to play."

In person, the actress radiates a kind of sunny, albeit definitely determined, optimism. Her laugh is ready and enveloping.

At 46, Vardalos just returned to the screen after a three-year absence with "My Life in Ruins," in which she plays a burned-out tour guide who falls for a Greek bus driver. In "I Hate Valentine's Day," which she also wrote and directed, she stars as a commitment-phobic florist who will date men only five times before a mandated breakup, a plan that goes awry when John Corbett (her "Greek Wedding" costar) opens a restaurant on her street. The movie is scheduled to open next month.

One of the themes of "My Life in Ruins" is a woman who has lost her kefi, the Greek word for life force or passion. It's an idea that clearly resonated when Vardalos read the script (which was written by "The Simpsons" writer Mike Reiss), and she later tweaked the script to accentuate it. Despite the success of "Big Fat Greek Wedding," which catapulted Vardalos from struggling unknown to Oscar-nominated star, she was hardly doing Greek dances for years after.

"I had lost my mojo a little bit," she says, before adding bluntly, "I had come to the end of a 10-year infertility battle. It knocked me on my butt. I had to just walk away.

"It was a big secret that I was keeping during all of the success of `My Big Fat Greek Wedding,' when everyone was saying she's so lucky. I fully appreciate the luck that came my way, but I was secretly, silently praying for the simplest act in the world, to carry a child to term. Career success is empty without a family for me."

She pauses tremulously. "I think that's why I'm so joyous right now."

Last year, after wrapping "My Life in Ruins" and "I Hate Valentine's Day," Vardalos and her husband, Ian Gomez, were matched with a 3-year-old girl through an American foster care agency. It had been a long wait, with a series of disappointments as previous adoption plans had fallen through.