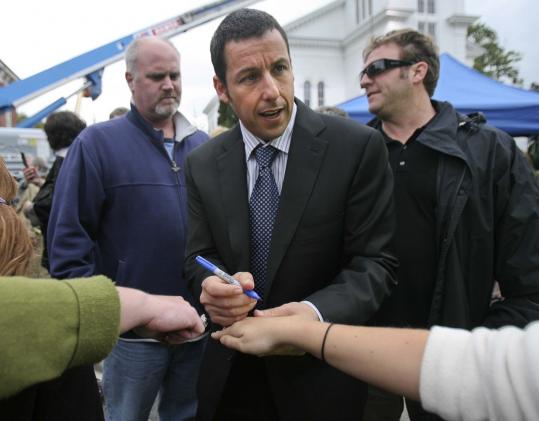 Adam Sandler and the gang from "Grown Ups" finally got going yesterday, filming scenes at Pilgrim Church and the Old Burial Ground in Southborough. The movie, which is directed by Dennis Dugan, stars Sandler, Kevin James, Chris Rock, David Spade, Rob Schneider, and Colin Quinn. The story centers on a bunch of dudes, and their respective spouses, who return home for a July Fourth weekend after a 30-year absence. (The film's female leads include Salma Hayek, Maria Bello, and Maya Rudolph.) Written by Sandler and "Joe Dirt" scribe Fred Wolf, "Grown Ups" will be shot mostly in Essex over the next two months. Yesterday, cast members were dressed in dark suits for a funeral scene.

Cruising with New Kids
Leominster's Melissa Buja, one of a throng of 30-something women who paid big bucks to take the New Kids on the Block fan cruise to the Bahamas, called us yesterday to say the trip was amusing, but maybe not worth the money. The ratio of crazed fans to New Kids - 2,000 to 5 - meant that Buja and her buddies spent much of the trip being clawed by crazed women (some of whom paid thousands of dollars) trying to get their paws on the Boston-bred pop stars. Buja, 35, said she was frustrated that Donnie Wahlberg, Joey McIntyre, Danny Wood, Jordan Knight, and Jonathan Knight spent so much of their time in roped-off areas, allowing only a few ladies to visit with them. "Donnie would point to certain girls," Buja said. "[The bodyguard] would only let the girls up who looked like total hoochies." Buja did manage to get up close and personal with one Kid. Each fan on the boat was allowed a few seconds to get their photo taken with one of the guys, and she chose Danny. "It was one minute and then they shoved us out the door."
A real survivor test
Ethan Zohn, the Lexington lad who outwitted his opponents to win "Survivor: Africa," is battling cancer. Zohn tells People.com he was recently diagnosed with Stage 2 Hodgkin's disease after suffering unexplained itching and night sweats. He said doctors discovered a swollen lymph node under his left clavicle, and a CT scan revealed a mass on the left side of his chest. "This is the ultimate game of Survivor," said Zohn, 35, "and there's really only one outcome, and that's to win. There's no other option." Zohn's girlfriend, "Survivor: The " winner Jenna Morasca, said she'll be at his side for the duration. "I will fight with every fabric of my being to get him through this," said Morasca.
Caroline's false start
Caroline Kennedy did not abandon her bid for the US Senate because her children and husband complained that she was becoming angry and intense. The daughter of President John F. Kennedy and niece of Massachusetts Senator Edward Kennedy said it's "absolute nonsense" that she dropped out of the race because her family was concerned about her behavior. Kennedy, who was in Boston yesterday to present the John F. Kennedy Profile in Courage Award, spoke earlier on the "Today" show. A new book by Edward Klein, "Ted Kennedy: The Dream That Never Dies," quotes an attorney saying Kennedy became "loud, harsh, and grating" while pursuing the Senate seat. Asked why she withdrew, Kennedy answered, "That was the right decision. There are many ways to serve." Singer catches show B-52s frontman Fred Schneider is a big fan of playwright Ryan Landry. The night before his band's sold-out show at House of Blues, Schneider went to Machine to see Landry's latest laugh riot, "Willie Wanker. . ." After his own gig Saturday, Schneider returned to the theater, getting together for a drink, or three, with Landry and the rest of the Gold Dust Orphans. .content>
Keeping it brief
Blair Underwood had to get going. The actor, who addressed Emerson grads yesterday, wanted to spend more time here, but had a family matter to attend to. "It's my 12-year-old's sixth-grade graduation," explained the "L.A. Law" and "Sex and the City" star, who was nonetheless thrilled to receive an honorary degree and deliver a pep talk to grads facing a frightful economy. Underwood said he knows something about taking risks in a down market. He just started his own production company and has been pitching reality shows to various networks. "You can get a 9-to-5, or you can be true to your craft," he said. . . . Congressman John Lewis, an honorary-degree recipient yesterday, chatted with ex-ABC News anchor Carole Simpson at Emerson's pre-commencement dinner Sunday.
Pet lovers gather for MSPCA-Angell gala
Emiley Zalesky, wife of Pops conductor Keith Lockhart, and Stacey Lucchino, wife of Sox CEO Larry Lucchino, were just a few of the familiar faces at the MSPCA-Angell Animal Tales Gala. Nearly 300 pet lovers attended the event, including MSPCA-Angell president Carter Luke and wife Penny Schiller, emcee Randy Price, Sarah and Peter Monaco and their dog Lucy, Lori and Matthew Sidman and their dog Monte, Michelle and Eric Wetlaufer, Anne Gifford and daughter Jess, Heather Reed Colleary and husband James, and George and Claudine Lewis.