Poker star is no fan of Joan Rivers 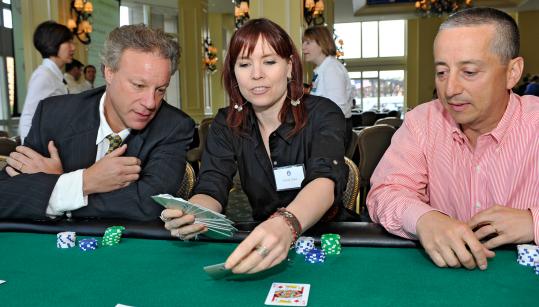 Annie Duke was delighted to be in Boston last night, if only because Joan Rivers wasn't. The New Hampshire-bred poker pro, who was here to host Children's Hospital Boston's annual Texas Hold 'Em Tournament, told us she'll not forget - nor forgive - Rivers for her boorish behavior on " Apprentice." (Rivers, who prevailed on the show's finale Sunday, called Duke "worse than Hitler" and labeled poker players "trash.") "My friends are wonderful people who would never, under any circumstances, say something like that," Duke told us yesterday. "I don't see any reason to have people [like Rivers] in my life. . . . I just hope that I don't come into contact with her again." Proceeds from last night's event at the Boston Harbor Hotel support the hospital's Children's Fund. Event cochairs were Tony DiNovi of Thomas H. Lee Partners and David Fialkow of General Catalyst Partners.

'FNX pulls Jazz Brunch from Sunday menu
Jeff Turton - host of the Sunday Jazz Brunch on WFNX - says he's been canceled. Turton announced on air during his Mother's Day show that after 26 years, the station has ended the Sunday-morning program. "I got a call late last week informing me that this past Sunday would be my last show. The reason being given is budget cuts related to diminished revenues at both 'FNX and at the Boston Phoenix," Turton said, in a statement about the cancellation. The Phoenix Media/Communications Group runs both the Boston Phoenix and WFNX. Not surprisingly, the announcement resulted in some angry e-mails and phone calls from loyal jazz fans. WFNX program director Keith Dakin could not be reached for comment.
Publick Theatre says the show won't go on
The Publick Theatre - which usually treats arts lovers to outdoor plays in Allston every summer - is taking 2009 off. Spokeswoman Joanne Barrett told us yesterday that the Publick's amphitheater, which was used for the Diego Arciniegas production of "The Seagull" last year, needs significant repairs to its lighting and sound systems, so there will be no summer production until 2010. The space, off Soldiers Field Road, will be used in July by Orfeo Group, which will put on "The Reduced Shakespeare Company's the Complete Works of William Shakespeare (abridged)." Barrett said Orfeo will host its shows early in the evening - when no electricity is necessary.
The celebrities speak
Howard Zinn is having a ton of fun as he puts the finishing touches on "The People Speak," a movie based on his best-selling book, "A People's History of the United States." Zinn, who'll turn 87 in August, is editing hours of footage to get the film ready for broadcast on the History Channel later this year. "We have a lot of rich material," the former BU professor told us yesterday. No kidding. In addition to monologues by the likes of Josh Brolin, Viggo Mortensen, David Strathairn, and Marisa Tomei - all of whom were taped last year at the Cutler Majestic Theatre - Zinn and coproducers Chris Moore and Anthony Arnove have filmed performances by Sean Penn, Bruce Springsteen, Eddie Vedder, and Bob Dylan. "It's the first time I'd met Dylan," said Zinn. "I was surprised by how warm and genial he was. I've seen him on TV and he'd seemed so dour, but he was prancing around the stage." (Dylan recorded "Do Re Mi.") And what about the Boss? "Bruce said to me, 'Wow, this is like seeing a ghost. I've been reading your books for 25 years, and we finally meet,"' said Zinn, chuckling at the memory. Widely admired by liberals since its publication in 1980, "A People's History" is a collection of the letters, speeches, and last words of agitators, activists, soldiers, and slaves. The History Channel has announced it's also developing a curriculum for an educational initiative based on the book and the movie.
House guests
Celebs flocked to the White House Correspondents' Association Dinner this past weekend, but not all of them got a close look at President Barack Obama's Pennsylvania Avenue abode. Burlington funny lady Amy Poehler - who now plays a well-intentioned bureaucrat on the sitcom "Parks and Recreation" - made time for a tour of the White House during her trip. Joining her was her husband, "Arrested Development" guy Will Arnett.
Mom power
The Bruins used a little flower power on Mother's Day to extend their playoff series against Carolina. A bunch of B's wives and moms, including Tim Thomas's wife, Melissa (right), were at the Garden handing out mini Gerber daisies to moms as they came through the turnstiles.
No reservation? No problem.
It's lucky for Tommy Lee Jones that UpStairs on the Square owners Mary-Catherine Deibel and Deborah Hughes were present when the Oscar winner and a few friends walked into the restaurant Sunday. Seems the Mother's Day brunch was sold out, but Deibel and Hughes managed to find "The Fugitive" star a table for five. (No, we're told there wasn't a mother among them.) Jones, a Harvard alum, is in town shooting "The Company Men" with Ben Affleck and Maria Bello. . . . Al Pacino dined at Rialto last night before making his way over to the Elliot Norton Awards at Sanders Theatre. Before leaving, the "Scarface" star said hello to chef Jody Adams.
Wahlberg in town for 'Fighter'
We're told Mark Wahlberg is indeed in town for meetings related to "The Fighter," director David O. Russell's film about Lowell-bred brawler "Irish" Mickey Ward. Wahlberg, who's got the biceps of a boxer, is trying to stay buff while in Boston. Early yesterday, he and a trainer were working out at Equinox in the Back Bay. Later, we're told, the actor was set to meet up with Russell, screenwriter Scott Silver, Ward, and the boxer's half-brother and former trainer Dicky Ecklund, who'll be played in the movie by "Batman" star Christian Bale.