Focus was on Pats cheerleaders 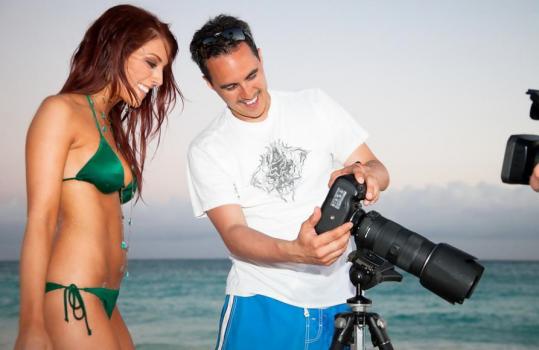 Katie Birckbichler and the rest of the Pats cheerleaders are back from Aruba. The pom-pom posse spent a week shooting their 2010 swimsuit calendar and frolicking with 150 Pats fans who traveled to the tiny island courtesy of TNT Vacations. The trip included private dinners, beach volleyball, meet-and-greets, and special performances by the squad.

Plenty of 'Fight' left
Chuck Palahniuk's reading at the Brattle Theatre last night looked something like a model UN conference, which made the "Fight Club" writer very happy. Palahniuk asked fans via his website and Twitter to dress in international costumes for his book signing, mimicking a scene from "Pygmy," his new novel about foreign-exchange-student terrorists. "Book events can be so incredibly boring," Palahniuk told us yesterday, explaining why he wanted to see readers in kimonos, sarongs, saris, and kilts. Palahniuk also told us that "Fight Club" the musical is still in the works, as far as he knows. "Every time I think it's dead, ['Fight Club' director] David Fincher is talking about it again." Last Palahniuk heard, Josh Brolin wanted to help produce it. Palahniuk arrived in Cambridge on Monday night, just in time to dine at the Harvard Square restaurant Harvest. He told us he recommends the beet salad and something called a "forbidden rice tartlet." "It was fantastic."
'Burrito City' for a day
The folks at Puma City on the Fan Pier found a unique way to celebrate Cinco de Mayo yesterday: A burrito-eating contest. On tap to chow down were Miss Massachusetts USA Alison Cronin, Miss Massachusetts Teen USA Katie Vatalaro, Miss Connecticut USA Monica Pietrzak, Miss Connecticut Teen USA Tiffany Teixeira, WFNX morning man Special Ed, and Jam'n 94.5's DJ Roy Barboza.
And Lucchino makes 3
Larry Lucchino will be at the Barnes & Noble in Kenmore Square before tonight's Sox game. The Sox CEO is supporting his buddies Brian and Gerri Monaghan, authors of "The Power of Two: Surviving Serious Illness with an Attitude & an Advocate." Brian was a hotshot trial lawyer in San Diego when he was diagnosed with melanoma and given six months to live. That was a decade ago. The bookstore will be giving away four tickets to tonight's Sox game.
The 'Wheel' deal
Vanna White will be in town next week to tape a promo for some upcoming Boston episodes of "Wheel of Fortune." We're told the leggy letter-turner will be filmed May 14 walking out of Joe Milano's Union Oyster House. Vanna, Pat Sajak, and the rest of the "Wheel of Fortune" crew are coming to Boston in September to tape three weeks of shows at the Boston Convention and Exhibition Center.
Theater's spring fling
A good time was had by all at the Huntington Theatre's annual spring shindig. Hosted by Tony winner Kelly Bishop, the evening featured performances by Maureen McGovern and OBIE winner Euan Morton, a guest list that included Dick and Doris Kearns Goodwin, author Robert B. Parker and wife Joan, Celts co-owner and Huntington trustee David Epstein, and Walt Meissner, dean of BU's College of Fine Arts.
Luke Russert honored for leadership
Luke Russert, son of the late Tim Russert, was in New Hampshire earlier this week to accept Franklin Pierce College's Marlin Fitzwater Award for Leadership in Public Communication. The recent Boston College grad is a correspondent-at-large for NBC News, where he's covered issues about young people. He also hosts the sports radio show "60/20 Sports" with James Carville.
Women the focus at food awards
The James Beard Foundation handed out its annual awards Monday at Lincoln Center and the spotlight was on women. The procession of hotshot chefs parading the red carpet included Fall River native Emeril Lagasse, ubiquitous Italian restaurateur Mario Batali, the chefs' chef Thomas Keller, and Blue Ginger owner Ming Tsai, who appreciated this year's theme. "Women chefs have been a really big influence on me," Tsai said. "It was at my mother's restaurant, Mandarin Kitchen, in Dayton, Ohio, where I got the restaurant bug. I owe it all to her." Other Boston Beard winners in the crowd included Ken Oringer and Todd English, who called Julia Child a "great mentor." Denise Korn of Boston-based Korn Design won a Beard for Outstanding Restaurant Graphics for its branding campaign for the Corner Office Restaurant + Martini Bar in Denver. At the post-awards reception, we ran into Barbara Lynch, Best Chef Northeast in 2003. Lynch said she was there to see mixologists Misty Kalkofen and Josey Packard, bartenders at Drink, Lynch's Fort Point bar. "Cocktail culture is now a legitimate part of the restaurant culture," said Packard, "and having us at the Beard Awards is a reflection of that."
Clarkson's a fan
Kelly Clarkson was backstage at the House of Blues on Monday night dishing about her days off in Boston. The singer, on tour with Lady Gaga, said she got here a few days early to visit a friend, and that highlights of her weekend included checking out Adele's show at the House of Blues and seeing "X-Men Origins: Wolverine." The singer also told folks backstage that she's a huge Red Sox fan. Of course, we already knew that. Last summer, a seemingly boozy Clarkson was caught on tape at Fenway Park singing "Sweet Caroline" with pals. Find that one on YouTube and you'll forgive her for singing the national anthem at Yankee Stadium's Opening Day last month.
Quincy point
"The Company Men" were in Quincy Point yesterday as Ben Affleck and Kevin Costner shot scenes at a home on Watson Road. With the aid of umbrellas and tents, the stars of director John Wells's downsizing drama mostly managed to dodge the raindrops. The actors, who play brothers-in-law in the movie, were rumored to be filming a barbecue scene on the home's back porch.

Globe correspondent Liza Weisstuch contributed. Names can be reached at names@globe.com or at 617-929-8253.