Micky Ward story gets some punch from Bale and Wahlberg 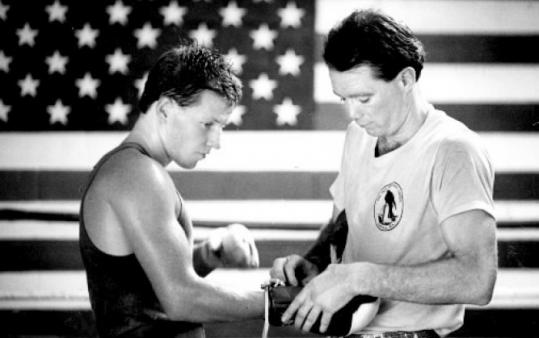 Christian Bale as Lowell legend Dicky Eklund? So says Variety. The Dark Knight has signed on to costar with Mark Wahlberg in "The Fighter," the story of local boxing champ Micky Ward and Ward's half-brother, Eklund, who trained him. Wahlberg and "Fighter" producer Dorothy Aufiero, who supervised production on "Good Will Hunting," have been trying to get a green light for the movie for years. Brad Pitt was originally cast as Eklund, but yesterday Variety announced Bale's involvement and reported that David O. Russell, who worked with Wahlberg (left) on "Three Kings" and "I Heart Huckabees," had signed on to direct. Originally, "Wrestler" director Darren Aronofsky was supposed to helm the project. Aufiero told us she's fine with the personnel changes. "Love it, love it," she said. "I'm ecstatic over Christian Bale. I think it's going to be a great film." We've heard that before. Asked whether "The Fighter" is an official go, Aufiero said she couldn't comment, but if it happens, she'll make a push for the film to be shot locally. After all, Micky and Dicky are Lowell institutions. "You know I'm plugging for Boston," she said. "I think it has a good shot." Aufiero says shooting could start as soon as July. Ward was in Los Angeles this month to talk to Wahlberg about the project. Aufiero also declined to tell us how much the script will delve into Eklund's long history of drug problems and trouble with the law. He was in court for domestic assault charges as recently as January. Those charges were dropped.

Casting for a wife
"The Company Men" 's first wives club is expanding. We hear that Tony-winning, Lowell-born actress Maryann Plunkett has signed on to play Chris Cooper's wife in the recession-inspired drama, which has been shooting here the past few weeks. UNH grad Plunkett - whose real-life husband, Jay O. Sanders, recently starred in the Huntington Theatre Company's run of "Two Men of Florence" - joins "Mad Men" star Rosemarie DeWitt (she plays Ben Affleck's wife) and Maria Bello, who has been filming scenes with Tommy Lee Jones. Bello's in danger of picking up a Boston accent: She'll stay in town to film "The Lake House" with Adam Sandler and Rob Schneider. . . . In other "Company" news, Framingham resident Jim Idzal says he and wife Leslie are trying to decide whether to keep renovations made by the film's crew. Before scenes with Affleck and Kevin Costner were shot at the Idzals' home last week, the crew made the couple's living room a dining room, and their dining room a living room. Idzal said he and his wife aren't opposed to the switch - it's just confusing. "We moved out for about two weeks because they were redecorating the whole first floor." Idzal said Costner was the most outgoing of his guests; Mr. "Field of Dreams" took the time to socialize with neighbors and take pictures.
Missing the Boss
Vincent Pastore, who's in town with the Boston International Film Festival today to promote the locally shot comedy "Tricks of a Woman," tells us he's sad he missed the Boss. Pastore was supposed to arrive in Boston yesterday - early enough to catch Bruce Springsteen's gig at the Garden - but he was too sick to make the trip. He was set to arrive this morning. "Stevie's in the band, so, you know, I have an in," Pastore said, of his "Sopranos" pal Steven Van Zandt. Pastore - who will be joined at the screening by his castmates ("Men in Trees" hot guy Scott Elrod, local newcomer Elika Portnoy, and Madonna's ex Carlos Leon) - said he'll be meeting Leon for the first time tonight. "We didn't have any scenes together," he said. "It's weird for me because I'm friends with Guy Ritchie, so I know [Leon and Madonna's daughter] Lourdes. That's weird, right?" "Tricks of a Woman" plays tonight at the Lowes Boston Common.
Flight path
HBO stars Bret McKenzie and Jemaine Clement, better known as Flight of the Conchords, stayed up late around Boston this past weekend. After the duo performed to a sold-out crowd at the Agganis Arena, they were honored by - and then partied with - staffers at the Harvard Lampoon. Joining the New Zealanders for the after-show schmoozefest (which lasted until 2 a.m.) were "Conchords" costars Kristen Schaal and formerly local comic Eugene Mirman, both of whom opened the Agganis show earlier that night. Other late-night revelers included Randy and Jason Sklar, twin comedians who have appeared on ESPN Classic, VH1, "Grey's Anatomy," and "Entourage."
Lighting up the dinner party
The Associates of the Boston Public Library hosted its 21st Literary Lights Dinner Sunday. VIP guests included "John Adams" writer David McCullough, "The Pilot's Wife" author Anita Shreve, and Sebastian Junger,who wrote "The Perfect Storm."