Lord of the rings 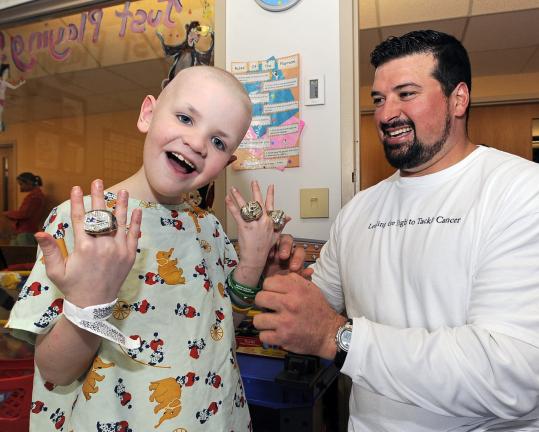 Former Pats player Joe Andruzzi (above) and his wife, Jen, visited Children's Hospital Boston yesterday and donated $75,000. Andruzzi, a cancer survivor, hosts an annual fund-raiser and donates a portion of the proceeds to a brain cancer fund at the hospital. To the delight of patients, including 8-year-old Ian Maher of Westwood (above), the former lineman brought along his three Super Bowl rings.

The Truth about food

Who knew Paul Pierce was such a foodie? The Celts captain is featured in the new Zagat restaurant guide. "A Spotlight on Boston Restaurants: Paul Pierce's Favorites for Healthy Dining" highlights No. 34's tips for eating healthfully in Boston restaurants. We learn, for example, that Pierce, a la Wade Boggs, eats the same meal before every game: grilled salmon, a baked potato, and broccoli. Pierce chatted with Tim Zagat before Wednesday's game against the New Jersey Nets at the Garden.

Hizzoner Tom Menino enjoyed a king-size cup of coffee at Equal Exchange's new eco-cafe on Causeway Street. This is the employee-owned company's first-ever full-size cafe. The business, which started on Albany Street 23 years ago, provides organic coffee, tea, chocolate, cocoa, and snacks to area markets.
It's a bird, it's a plane. . .
We're looking forward to Lexington scribe Larry Tye's next tome. The former Globe writer is working on a biography of Superman, tracing the Man of Steel's trajectory from comic strip - by Cleveland teens Jerry Siegel and Joe Shuster - to cultural icon. "We need Superman more than ever," says Tye, whose deal with Random House was negotiated by Boston-based Jill Kneerim of Fish & Richardson. "It's no coincidence Obama mentions Superman in every third speech." Tye's last book, due out in June, is a biography of Negro League legend Satchel Paige. He also co-authored "Shock" with Kitty Dukakis.
Vineyard eyes Obamas
While Barack Obama will likely spend two weeks on Martha's Vineyard, we're told his wife, Michelle, could be on the island for the entire month of August. The Vineyard's all abuzz about the first family's visit, which we first reported earlier this week. "It's wonderful for the island," said photographer Peter Simon, brother of singer Carly Simon. "Timing is everything, and right now the Vineyard could really use a visit by the president." Sources tell us the Obamas are eyeing a house in the East Chop area of Oak Bluffs. The White House has declined to comment on the president's vacation plans.
Angelina a no-show
Angelina Jolie was supposed to swing by Harvard University on Wednesday night to hear her brother James Haven talk about social responsibility at the school's Kirkland House as part of International Relations Week, but she didn't make it. She was held up on Long Island, filming the thriller "Salt" with Liev Schreiber. Students who organized the celebrity activist's talk had been told by his handlers that his entire family - including Angelina and her hubby, Brad Pitt - were going to be there, so campus police began preparing for crowd control. It wasn't needed. What's more, Haven was originally going to be part of a panel of humanitarians, but "that did not fly" with his people, who demanded that he get the stage to himself, according to Alyssa Yamamoto, a freshman who coordinated the event.
Frank tops the list
Barney Frank is all powerful, according to Out magazine. Our fast-talking representative was ranked No. 1 on Out's 3d Annual Power 50, which ranks the 50 most influential gays and lesbians. Frank switched spots with last year's No. 1, Ellen DeGeneres. Other locals on the list include Phillips Andover and Harvard grad Chris Hughes, who cofounded Facebook (he's No. 32), Northampton's Rachel Maddow (she's No. 4), and the chair of President Obama's Council on Environmental Quality, Nancy Sutley, who went to Harvard (she's No. 40).
A good 'Tip' for Flavin
Congrats to Dick Flavin, whose "According to Tip" was named Best New Play of the Year at this week's Independent Reviewers of New England Awards at the Boston Center for the Arts. Said Flavin: "This makes me the world's oldest overnight sensation." The one-man show starred Ken Howard as Tip O'Neill.