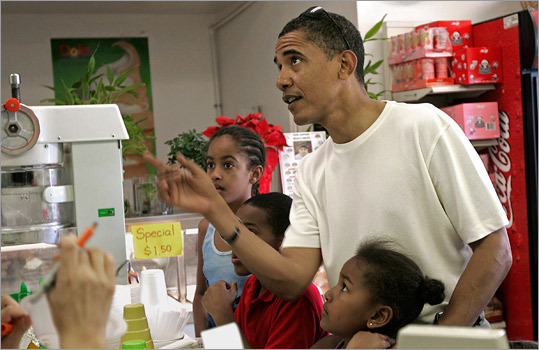 Following in the footsteps of Bill and Hillary Clinton, President Barack Obama may vacation this summer on Martha's Vineyard, we're told.

The White House wouldn't confirm the first family's vacation plans yesterday, but word is the Obamas have rented a house for two weeks at the end of August in the East Chop neighborhood of Oak Bluffs.

"This is one of the most exciting things that will happen this year," said Fred Mascolo, owner of Trader in Edgartown and a principal of Jane Brown Real Estate Associates. "When Obama said he would fix the economy, I didn't think it would be this soon."

A presidential visit, especially one lasting two weeks, would indeed be a boon to the island economy because the president travels with a huge retinue of Secret Service, aides, and journalists. Hundreds, if not thousands, of people will need housing during Obama's stay, Mascolo said. . . . Coincidentally, the Clintons will be on the island at the same time, we hear.

"I'm comfortable telling you rumors are flying that he's coming here," said Susan Goldstein, owner of the 40-room Mansion House in Vineyard Haven. "I can also say we've had an increase in reservations during that period."

Nancy Gardella, executive director of the Martha's Vineyard Chamber of Commerce, likewise wouldn't confirm the president's visit, but said "we would be thrilled, of course, if the Obamas were to come this summer."

Located on the northern tip of Martha's Vineyard, Oak Bluffs has become something of an African-American enclave. Politician and pastor Adam Clayton Powell Jr., writer Dorothy West, and Massachusetts Senator Edward Brooke were all early homeowners, and celebrities such as Spike Lee and Oprah Winfrey are frequent visitors.

"If you're African-American and not in a suit and tie in a shop on Newbury Street, there's kind of a 'what are you doing here' sort of thing," says W. Karl McLaurin. "It's not like that in Oak Bluffs because there's a long history."

McLaurin, director of marketing at the state Department of Housing and Community Development, has been spending a portion of his summer in Oak Bluffs for many years. He and his father regularly go fishing and play golf with Charles Ogletree, the Harvard Law professor who is a close friend and former adviser of Obama's.

Ogletree, who has owned a place in Oak Bluffs for 15 years, has hosted Obama on several occasions. The first time was in August 2004, after the then-Illinois senator gave a rousing speech at the Democratic National Convention.

"He would tell you I misled him," Ogletree said yesterday, laughing. "I asked him to just drop by [the Vineyard] and say hi, and then when he showed up there were all these really excited people there to meet him."

Ogletree said Obama would likely use his time on the island to read, play golf, and spend time with his wife, Michelle, and the couple's two girls, Malia and Sasha. "He'll be Mr. Dad as opposed to Mr. President," Ogletree said.

So what if rain washed out the season opener, it didn't damper the spirit of Sox players, coaches, and owners, all of whom gathered at the House of Blues last night for the team's traditional "Welcome Home" dinner to benefit the Red Sox Foundation. The event, emceed by super fan Mike O'Malley, featured a mock game show pitting David Ortiz and Tim Wakefield against Justin Masterson and Jonathan Papelbon. The show was modeled on "The Match Game" - no, O'Malley doesn't look like Gene Rayburn - with contestants filling in the blank. (Sample: J.D. Drew is so quiet that he doesn't make a sound when he ____.) "Unfortunately, if you a do a decent job at these things, they ask you back," O'Malley told us, joking about his status as the Sox in-house MC. Talking about the youth of the '09 Red Sox roster, the sitcom star said he has a "fleshy growth" in his armpit that's older than Jacoby Ellsbury. "Thanks to tonight's sponsor Covidien, I got it removed today at Mass. General," he said. O'Malley told us he's got two projects in the works, including a gig on NBC's pilot "Parenthood," on which he plays Maura Tierney's ex-boyfriend. "We haven't shot it yet," he said. "Who knows, maybe I'll get fired before we do.' (Actor Ben Affleck flew from LA to Boston yesterday, but if he was at last night's dinner, we didn't see him.)

Andover native Jay Leno stopped by Salem State College last night to honor his pal Lennie Sogoloff, who featured a young Leno at his North Shore club, Lennie's on the Turnpike, in the early 1970s. "Lennie's was the first professional club where you got out on stage and you knew you were rising or falling on your own," Leno said to a sold-out crowd. For Leno's thoughts on WHDH Channel 7's recent beef with NBC over plans to air the news at 10 p.m. instead of Leno's show, see Business, B9.

Phish to take the field

As soon as Dave Matthews and friends finish their two-night stint at Fenway Park on May 29 and 30, Trey Anastasio and friends will take over. Phish announced - and Live Nation confirmed - that the jam band will play a show at Fenway (a.k.a. Phenway) on May 31. Trey and Co. are obviously excited; the band made a little Fenway video and posted it at www.phish.com/fp. Seats can be requested online at www.phish.portals.musictoday.com. Tickets officially go on sale at 10 a.m. on April 18 for $49.50.
Aerosmith CD on hold
Aerosmith fans giddy about the band's first album of new material since 2001 will have to wait a bit longer to hear it. Joe Perry told Billboard.com this past weekend that the boys are postponing the release because of an aggressive summer tour with ZZ Top, and because of Steven Tyler's bout of pneumonia, which delayed recording. In the meantime, Perry says impatient members of the Blue Army can expect another disc of Perry solo material soon.
Chefs night out
It was a feeding frenzy at Big Sisters' celebrity chef dinner at Radius the other night. The $500 per-person fund-raiser included a six-course dinner prepared by Ting Yen of Oishii, Marc Orfaly of Pigalle, Michael Schlow of Via Matta, and Matthew Audette of Radius. During the evening's auction, we're told Schlow enticed two people to bid $10,000 each for dinner for four at Radius, Via Matta, Toro, Oishii, and Pigalle. Let's eat!
Irish pop star in town
He's no Jordan Knight or Donnie Wahlberg, but he may just be the Irish equivalent. Keith Duffy, a grown-up-but-still baby-faced member of the Irish boy band Boyzone, was at the Hotel Commonwealth yesterday to promote awareness of autism with the state's second in command, Tim Murray. Duffy has worked on autism causes since his daughter was diagnosed with the disorder. The pop prince may be a no-name here, but he's sold about 20 million records with Boyzone and is a judge on "You're a Star," an Emerald Isle version of "American Idol."