Getting ready for U2 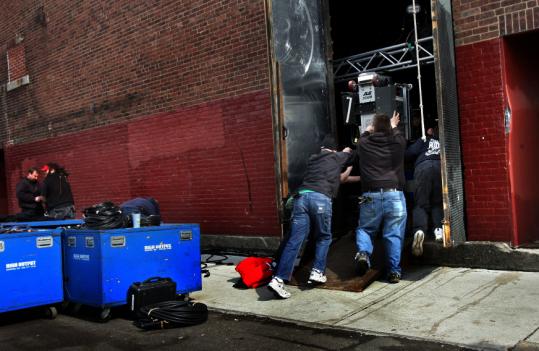 Jake Berry looked a bit bleary-eyed yesterday as he watched gear being loaded into the back of the Somerville Theatre. A Brit, Berry's the founder of Fader Higher, one of the premier event production management companies and the folks handling tonight's not-so-secret U2 show in Somerville. Having worked with everyone from the Rolling Stones and AC/DC to Shakira and the Wiggles, Berry was unfazed by the prospect of putting the world's biggest band on stage at a 900-seat theater.

"It'll be fine," he said, running a hand through his white hair. Tell that to the Somerville Fire Department, which said yesterday they're preparing for as many as 10,000 rabid fans to descend on Davis Square. Of course, some of them will end up at one of the neighborhood's two Irish bars, the Burren or the Joshua Tree.

Only a tiny fraction will actually get into the show, which is one of three PR stunts the band is staging this week to hype their latest CD "No Line on the Horizon." (Bono, The Edge, Adam Clayton, and Larry Mullen Jr. did hourlong radio shows in LA and Chicago the last two nights.) Berry said tonight's gig will include a brief Q&A with fans and perhaps four songs. Jeff Antonellis, who works for Needham-based Capron Lighting and Sound, was all smiles yesterday as he waited outside the theater for his crew to arrive. (The company's providing generators to power the audio and lights.)

"We'd heard something about this trickling down last week, but I only got the official word at 8:30 this morning," Antonellis told us. "That shows you how under wraps they were trying to keep it."

The hubbub on Meacham Road attracted several curious fans, including Brendan Bobzin and Ben Privett, two software developers who work next door. "Who do we have to pay off around here to get in?" said Bobzin. Good luck with that. We're told the lucky few who have tickets have been instructed to meet at the New England Aquarium, where they'll be picked up and taken by bus to the gig.

Linking up with 'Entourage'
Tom Brady looked right at home shooting a golf scene with the stars of HBO's "Entourage" this week in LA. In the episode, the Pats QB and Mark Wahlberg play themselves at a celebrity golf tournament benefiting Autism Speaks. Brady and Wahlberg - who's wearing a hat bearing Tom Brady's TB logo - have a laugh at Kevin Dillon's character Johnny Drama as he tees off. Also there are Adrian Grenier (who plays Vincent Chase) and Jerry Ferrara, a.k.a. Turtle, who's looking sharp in an argyle sweater. No word on when the episode will air. Brady previously displayed his acting chops on "SNL," "The Simpsons," and in "Stuck on You."
Couple on the 'Block'
Keep an eye out for Millbury husband-and-wife team Dean and Shari Della Ventura on the latest cooking reality show, "The Chopping Block," airing tonight on NBC. The show, which pits eight couples against each other for $250,000 to open their own restaurant, stars chef Marco Pierre White, mentor to the incendiary Gordon Ramsay. The Della Venturas, who met - appropriately - when he was a chef and she was a waitress at the Point Breeze Restaurant in Webster, said White is much calmer than Ramsay, but equally intimidating. "He's incredibly intelligent and he knows what he's talking about," Dean said. "My take was, I'm going to get inside his head." Of course, the couple can't reveal how they did. But they admit there will be drama. "Some of the [couples] we took a liking to, some of them, if they were dying on the street, I wouldn't give them a glass of water," Dean said.
A Scottish delight
Berklee student Maureen McMullan is one of five singers featured in "Highland Heartbeat," a celebration of Scottish song airing tonight on WGBH. The special, filmed at the Theatre Royal in Glasgow and in Scottish countryside locations last summer, stars actress and singer Fiona Kennedy. "The staging is lovely, although there were some very high stairs," said McMullan, of her favorite piece, her solo rendition of "Down in the Glen." "It was a little tricky." The 28-year-old singer will spend tonight at the WGBH studios, giving viewers behind-the-scenes insights. "I may just burst into song," she promised. "It's cultural, we do that in Scotland." McMullan, by the way, is studying performance and song writing this year at Berklee, where she's enjoyed working with "Steely Dan" touring singer Carolyn Leonhart and Gabrielle Goodman, who's worked with Chaka Khan and Roberta Flack. "If you're going back to study, you want to do it in style," she joked.
Buddying up in Essex
Adam Sandler and Co. are getting serious about plans to film their untitled buddy flick in the Boston area this summer. (They're going with "The Lake House" as a working title, but, of course, that's already the name of a Sandra Bullock flick.) Lakefront Productions, Inc., affiliated with Columbia Pictures and Sandler's Happy Madison Productions, signed an agreement with Essex selectmen this week allowing filming in the town's Centennial Grove park. The flick, about five high school buddies who reunite on the Fourth of July after 30 years apart, will star Sandler, Kevin James, Chris Rock, David Spade, and Rob Schneider. A crew will film at a grove cottage and in other areas of the park. According to a town news release, "Preparation for filming has already begun and it is expected that filming will occur this summer with site restoration to be completed by September 15." Essex will get $150,000 for property use and parking. The film will be directed by Dennis Dugan, the guy behind "You Don't Mess With the Zohan" and "Happy Gilmore." Shooting is expected to start in May.
Harvard prize winner
Harvard University president Drew Gilpin Faust has won $50,000 from the New York Historical Society for "This Republic of Suffering: Death and the American Civil War," the Associated Press reports. The 61-year-old historian received the fourth annual American History Book Prize. Her other works on the Civil War and the South include "Mothers of Invention" and "A Sacred Circle." Harvard has a track record with this prize: Former professor and presidential historian Doris Kearns Goodwin is a previous winner.
Opposites attract a crowd at Wang
Sarcastic liberal yakker Bill Maher and aggressive right-winger Ann Coulter squared off at the Wang Theatre last night, kicking off the 2009 Speaker Series: The Minds That Move the World. The ongoing series will also feature former Vice President Al Gore, Charlie Rose interviewing James Carville and Karl Rove, and Soledad O'Brien interviewing Al Sharpton, Lisa Ling, and John Quinones.
MFA's new face for film
The MFA has a new curator for its film program. After a national search, they've found someone close to home: Carter Long will be the MFA's new Katharine Stone White Curator of Film and Video. Long, 29, is currently the MFA's film and video operations manager and will replace longtime curator Bo Smith, who left last October to head the Denver Film Society. "Over the last six months, Carter has handled one of the largest programs of its nature astonishingly well and with great creativity," said Edward Saywell, chair of the MFA's department of contemporary art and MFA programs.
Pitching a new album
Pops conductor Keith Lockhart was in Fort Myers yesterday, where he got a few tips from Sox closer Jonathan Papelbon. Just in time for the start of the baseball season, the Pops are releasing a Red Sox album, produced in conjunction with the Sox and MLB. The CD, out April 6, includes a new arrangement of "Sweet Caroline," as well as "Take Me out to the Ballgame," "Stars and Stripes Forever," and the Pops's take on the Dropkick Murphy's "I'm Shipping Up to Boston."

Globe correspondent David Rattigan and Linda Matchan of the Globe Staff contributed. Names can be reached at names@globe.com or at 617-929-8253.