U2 coming to Boston? 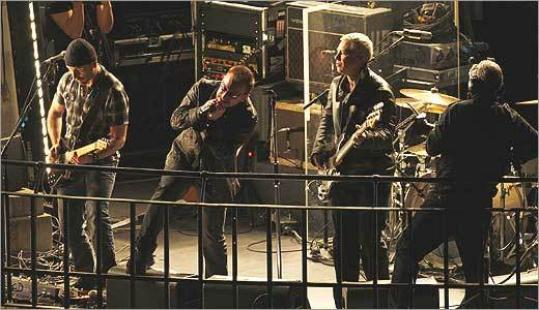 U2 is pulling out all the stops to hype its new CD, "No Line on the Horizon," which hits stores tomorrow. Bono and the boys played a surprise gig Friday on top of the BBC building in London, and tonight the lads take up residence on "The Late Show With David Letterman," where they'll be Dave's musical guest all week. (It's the first time a band has been given five nights on Letterman's show.) That's not all. According to the Hartford's Courant Eric Danton, the guerilla marketing campaign continues Friday, when Bono, the Edge, Adam Clayton, and Larry Mullen Jr. play what was supposed to be a "secret show" on the steps of Keating Hall at Fordham University. (Profs have been asked to cancel all their classes, but not told why.) So what, you say? Well, it's very hush-hush, but we hear that the Irish icons are looking to play a similarly stealth club show in Boston. No one will confirm it - or deny it, for that matter - but word is the mega-selling band, which had no difficulty selling out seven shows at the former Fleet Center in 2005, may return to its roots with a show March 11 at the Paradise. Why not the more spacious House of Blues? U2 is nothing if not nostalgic, and the band played its first headlining show in Boston at the Paradise in 1981. Of course, this would not be the band's only New England show promoting its 12th album. They're expected to play at Gillette Stadium in September.

High 5's for Dick Albert
Former couple Chet Curtis and Natalie Jacobson threw a party Friday for their former Channel 5 colleague Dick Albert, who retired last week after 41 years in the business. Guests at the Boston Harbor Hotel reception included TV types Mary Richardson, Susan Wornick, Anthony Everett, Kelley Tuthill, J.C. Monahan, Paul La Camera, Harvey Leonard, Emily Rooney, Phil Balboni, and Chet and Natalie's daughter Lindsay Curtis.
Bill drops by Blazers
Pats coach Bill Belichick took a break from wheeling and dealing Saturday to watch the Boston Blazers play at the Garden. With girlfriend Linda Holliday, Belichick even stopped by the post-game party at Johnnies on the Side, joining players "Dangerous" Dan Dawson, Mitch Belisle, Daryl Veltman, and Brenden Thenhaus, as well as team president Doug Reffue and 'ZLX morning man Pete McKenzie. . . . Meanwhile, Blazers lax man Sean Morris gave Celtic Glen "Big Baby" Davis a few pointers at Saturday's Breakfast for Champions, organized by Boston Centers for Youth & Families and Paul and Theo Epstein's Foundation to be Named Later. The event allowed 400 city kids to interact with the likes of soccer star Kristine Lilly, javelin thrower Tom Petranoff, former NFL linebacker Isaiah Kacyvenski, and ex-Pats Max Lane and Roland James.
Bingham boosts Jathar
Former "Baywatch" beauty Traci Bingham calls Tom Brady and Gisele Bundchen "the hottest couple ever," and predicts the pair's marriage will last a good long time. "I know Gisele and Tom a little," Bingham told us Saturday. "And they're perfect together." A Cambridge native who was a high school classmate of Matt Damon and Ben Affleck's, Bingham was in town this weekend for a party at Jathar Salon and Spa in Waltham. "I've been to spas all over the world, and the treatments here are the best I've ever had," said the actress, sipping a glass of champagne. Also paying their respects to spa owner Cynthia Jathar were Pittsburgh Steelers Ryan Clark and Anthony Smith, who told us they're big fans of Jathar's jewelry line. Asked about the Brady/Bundchen nuptials, the footballers said they aren't surprised the Super Bowl champ married the supermodel. "Surprised? Nah," said Clark. "She makes more money than him." Flashing a 10.5-carat diamond engagement ring of her own, Bingham said she's got a lot going on these days: a fiance, a home in Beverly Hills, a reality show called "Traci's Turn," and another show called "American Sex Symbol With Traci Bingham." "But the truth is I'm still a tomboy," she said, giggling. In case you're wondering, no, she did not date Matt or Ben in high school. "But I know Matt and I had a serious crush on each other," said Bingham. "He'll probably deny it, but he knows what's up."
Haskins clocks in
With all the pretty young women at McFadden's the other night, you'd think actor Dennis Haskins would have been in no hurry to leave. But our camera caught Mr. Belding from "Saved by the Bell" checking his watch, perhaps wondering how much longer he had to hang out at the Mardi Gras party thrown by Barstoolsports.com. Haskins made the most of his time in Boston, attending Friday's Celts game. . . . Bruins Mark Savard, Mark Stuart, and Dennis Wideman kicked back at the Estate after Saturday's OT loss. . . . Stylist Mario Russo joined KISS 108's Matt Siegel, Billy Costa, and Lisa Donovan yesterday to raise money for Rosie's Place. More than 80 women paid $50 for a Mario makeover, with proceeds supporting the women at Rosie's Place.