She wanted to be a millionaire 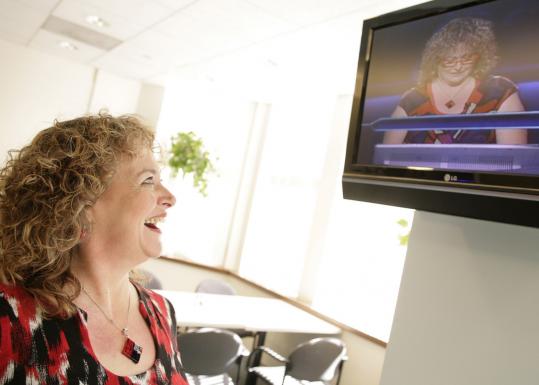 Suffolk University professor Mary Flaherty had a good time watching herself on "Who Wants to Be a Millionaire" with her students and colleagues. The group gathered at the school to witness Flaherty winning $16,000 from host Meredith Vieira on the show. (The 48-year-old Gloucester mom won her cash by defining what a "jumper" is in England. "I knew that from reading so many Agatha Christie novels as a kid," she said. And this wasn't her first trivia turn; she was also on "Jeopardy!" 10 years ago.) Flaherty said Vieira was just "lovely," on-camera and off. But the director of paralegal studies, who claims she has "a head full of useless information," bombed out on this question: "How many sides does an icosahedron have?" "I called my brother and he was trying to Google it, but he couldn't type fast enough," she said. "He feels terrible. He won't even watch the show." But Flaherty has no regrets. She's taking one daughter on a trip to Finland, buying her other daughter a cat, and said she had a great time. "What's so terrible about that?" Flaherty said. (For the record, we Googled it, and the icosahedron has 20 sides.)

They had the class of their lives

As anyone knows who's seen the show, the real stars of "Dirty Dancing: The Classic Story on Stage" are the dance moves. The show's dance captain Timothy Bish and ensemble member Emily Williams led a "Dirty Dancing" master class yesterday at Healthworks Fitness Centers for Women. The class incorporated music from the show, which is playing at the Opera House through April 12.

And the engagement speculation continues. . . . Tom Brady's girlfriend, Gisele Bundchen, is creating some online buzz this week as bloggers try to figure out whether the left-hand ring she sported last weekend in Brazil, is the ring. We think it's hard to tell from the pics, which show a little blurry glimmer on her finger. Gisele was home to celebrate Carnival.

Stars line up for Ted

Lauren Bacall, Bill Cosby, boldfacers from Broadway, and perhaps other surprise guests will celebrate Senator Ted Kennedy's birthday with a special performance at the Kennedy Center next month, the AP reported yesterday. The Massachusetts senator, who turned 77 Sunday, has been battling brain cancer. Kennedy Center officials announced plans for the March 8 event honoring the senator, who was first elected in 1962 after his brother John F. Kennedy became president. Kennedy Center President Michael Kaiser credited the Massachusetts Democrat - a trustee of the performing arts center since its creation - for his staunch support of the arts. Kennedy's been mostly absent from the Capitol since suffering a seizure on Inauguration Day. He did return to vote for the economic stimulus package.

Hub homeboys Matt Damon and Mark Wahlberg have new projects on the horizon. According to Variety, Damon is looking at starring in a sci-fi love story called "The Adjustment Bureau." Based on a story by Philip K. Dick, the script was written by "Bourne Ultimatum" scribe George Nolfi, who'll also direct. (Nolfi's busy at work on the fourth "Bourne" installment.) Wahlberg, meanwhile, is considering playing a cop, along with Will Ferrell, in a comedy called "B Team." The film would be directed by Adam McKay and written by Chris Henchy, who co-wrote the upcoming "Land of the Lost."

Dick Albert will sign off today after 31 years at WCVB-TV (Channel 5). His final broadcasts will air at 5 and 6 p.m. The station's been feting the weather man all week with special tributes and "memory lane" segments. "My career has been a gift," he said in a statement yesterday. "I've worked with the best in the business and enjoyed every minute of it." Albert told us recently he's planning a website and hopes to teach.

Being a rock star's daughter isn't all it's cracked up to be. Just ask Liv Tyler, who tells Wonderland magazine that she and her dad, Steven Tyler, have their ups and downs. The actress said the Aerosmith singer "has been going through a lot of things on his own" and as a result things are "still sort of hard" between the two. "It can be painful," laments Liv, who says she wishes her flamboyant father was around more so he could get to know her 4-year-old son, Milo.