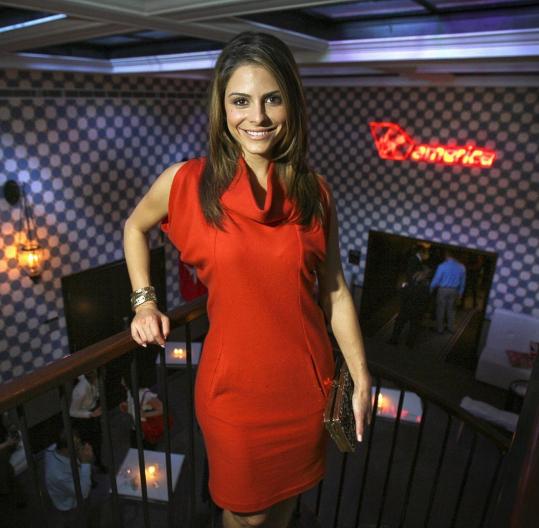 Maria Menounos criss-crosses the country enough to know the difference between a good and bad flight. And the trip she took yesterday on board Virgin America's maiden voyage to Boston was good. "It feels a little like a nightclub," the Medford native told us just after the plane pulled up to the gate. "It was all dark and purple, very cool." The "Access Hollywood" correspondent said she was excited to finally meet Virgin CEO Richard Branson, who managed to make quite a first impression, walking onto the plane in drag. "Oh my god . . .," said Menounos, laughing at his blond pigtails. (Branson was back to his old self in time for last night's Virgin party at the Liberty Hotel.) Menounos said she was happy to hype Virgin's new low-fare service, in part because Branson is making a donation to her charity, called Take Action Hollywood! "It was great," she said of the flight. "I watched some of 'Step Brothers' and got some work done." . . . Dr. Steve Valle caused folks to do a double take at WBZ's business breakfast yesterday. That's because Valle bears more than a slight resemblance to Branson, who asked the doctor to be a guest at his table and then tried to fool the crowd by sending him up to speak.

Anchor Rudat is out at Ch. 7

"I was told . . . that I am very skilled and that I am very talented but I am not right for the station," said Rudat, 29, who started at Channel 7 in early 2007. His contract with the station expires April 22, which will be his last day. Rudat (inset) also anchors weekends on sister station CW-56. "Good things will come out of this," he predicted.

WHDH GM Chris Wayland declined to comment on Rudat's departure, the latest in an exodus of employees from the station. Last weekend, Randy Price, an anchor at the station for 12 years, abruptly left. He said he was told by owner Ed Ansin that the station was moving in another direction. Two weeks ago, the station laid off Jorge Gonzalez, its 11 p.m. executive producer.

The station, which has traditionally dominated the 11 p.m news hour, has fallen to third place in the past year. All three men have been vocal about the station's flashy news content and direction and have lobbied for a more thoughtful approach to local stories.

"I will say, along with Randy, that I am a very vocal person. That is what local news should be," said Rudat, who grew up in Los Angeles. In May 2007, he won a regional Emmy for a story about a fire chief who was a convicted child sex offender. He has been nominated for five other Emmys. Before joining WHDH, Rudat was an investigative reporter and fill-in anchor at WVIT-TV in Hartford. "We should be able to debate what the story should be," Rudat said. "If you debate, you suddenly become a target. . . . It's really hard."

Still, Rudat said he harbors no ill feelings for the station. "This is a business. I stand 100 percent behind my work. If someone doesn't like your work, why do you want to be there?" he asked. "It's a relief. My lifelong dream is to work in Los Angeles where my friends and family are."

Classic style
Dejected fans of "Project Runway" can get their fix tonight - at Symphony Hall, of all places. The Boston Symphony Orchestra is presenting "Project Mozart," a fashion contest featuring ensembles by 11 local design students, inspired by the composer's music. "Mozart is so accessible to everyone, it seemed like a great fit," said marketing director Sarah Manoog. The competing designs are quite diverse. "People contemporized it. Some people took it quite literally, some people thought about the time period, the man himself, the music." Patrons can view and vote on the designs prior to attending the all-Mozart BSO programs tonight, Tuesday, and next Thursday, and the winner will be announced at a post-show bash next Thursday. Participating Boston-area fashion students include: Emily Hancock, April LeBlanc, Charles Neumann, Rheanna Oliver-Palanca, Christian Di Pietro, Christel Akouri, Ashley Marie Collett, Virginia Grassilli, Lowander Lee, Paige Skinner, and Cam Yen Le. Each student received $150 to produce his or her design. And no, the BSO didn't fly in Michael Kors or Heidi Klum to judge the pieces. But the local panel does include Gretta Monahan, the Improper's Jonathan Soroff, Miss Massachusetts USA Alison Cronin, designer Denise Hajjar, and Tonn, executive director of Tonn Model Management.
Match game

Anna Kournikova (inset) is headed to Boston for a Valentine's Day tennis tourney. The retired Russian tennis pro will join Pete Sampras, John McEnroe, Mats Wilander, Jim Courier, Todd Martin, and Mikael Pernfors in the Champions Cup Boston, which kicks off tomorrow at Agganis Arena and lasts through the weekend. "My romantic plans will be on the court," Kournikova joked yesterday, on the phone from sunny Florida. She'll have to be on her toes. The big names on the tour are some of the best who ever played the game. "They're amazing legends," she said. "They put on a good show. It's kind of easy when you're not a pro athlete to not train every day . . . but they still keep up this amazing level." The paparazzi - who love to snap pics of her with boyfriend Enrique Iglesias - also keep her hopping. They're always looking for an engagement ring and speculating on the status of her relationships, she acknowledged. "If I came out of a restaurant and ate a plate of pasta, I'm pregnant," she said. "If I wear a baby doll dress, I'm pregnant. It's a little weird."

Sirius consideration?
Maybe opposites do attract. Robert Kraft made an impromptu appearance yesterday on Howard Stern's Sirius XM Radio show, and it sounded like the shock jock and the punctilious Pats owner are good buddies. "I feel such a connection to you, I'm going to friend you on Facebook," Stern said at one point. Kraft, who's been on the show before, told Stern he was in the building to meet with Sirius XM CEO Mel Karmazin. Hmm. The New York Times reported this week that Sirius XM is preparing for a possible bankruptcy filing. According to the Times, the company owes $175 million in debt payments at the end of February, and it probably won't be able to pay. Pats flack Stacey James told us he didn't know anything about the Kraft-Karmazin confab, but it didn't surprise him. After all, the Pats owner is chairman of the NFL's broadcast committee, and the league has a contract with Sirius. Talking to Stern yesterday, Kraft touted satellite radio - which couldn't have thrilled the folks at WBCN, the "Patriots Rock Radio Network" - and said Sirius has a bright future. (He must know something we don't.) Stern wondered if the Pats are planning to dump Tom Brady. Not likely, said Kraft, who surprised us by being on a first-name basis with Stern sidekicks Gary Dell'Abate and Artie Lange. Maybe Sirius should consider giving Kraft his own show.
Urban troopers
This year's "Banned in Boston," the annual fund-raiser for Urban Improv, has some serious star power: Governor Deval Patrick and his wife, Diane, Mayor Tom Menino, and Attorney General Martha Coakley will all sing and act in the extravaganza, along with Aerosmith bassist Tom Hamilton, "Greater Boston" host Emily Rooney, auto magnate Ernie Boch Jr., and Broadway star Nancy Anderson. The show will be at the House of Blues April 29.
Mo money
Sox slugger Mo Vaughn was hard to miss at West on Centre in West Roxbury the other night. We're told the former AL MVP had dinner with his business partners and then left a very generous tip.
Pajama party
P.J. Axelsson was at BJ's in Revere yesterday, collecting pajamas for his annual donation to Cradles to Crayons. Fans who brought jammies to donate got an autograph from the Bruins forward. Fans can also bring pajamas to the Feb. 28 Bruins game against Washington.