Run to the Hall of Fame 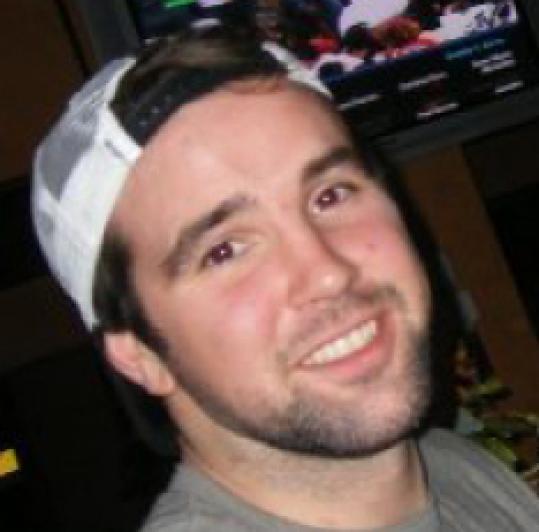 Darryl "DMC" McDaniels made the rounds with the local media yesterday, talking about Run-DMC's induction into the Rock and Roll Hall of Fame, and he managed to make a little news during one interview. Appearing on radio station WAAF-FM, DMC was asked who should induct the rap act. "It's a no-brainer if Aerosmith does it," said McDaniels. "I hope they're listening. It's their hometown." Wisely, the station immediately rang up Joey Kramer, and asked the Aerosmith drummer if he might do the intro. Of course, Kramer said. Run-DMC's 1986 LP "Raising Hell" was one of the biggest-selling rap albums of all time, thanks to the cover of Aerosmith's "Walk This Way."

Bromance in Medford
It's official: Medford's Luke Verge (inset) is Brody Jenner's new BFF. The 24-year-old reality show winner, who traveled to LA last year to compete with eight other dudes for Jenner's affections on MTV's "Bromance," watched the final episode with about 100 friends at The Place Monday. He's been bartending there on nights the show airs, says bar manager Dre Haynes. "It was great because he didn't tell anyone what was going on," he said. In the show's last episode, Verge had to take a lie detector test in front of Jenner's mom and show Jenner around Medford. The parents served Bruce Jenner's son a lobster dinner. Haynes said he was rooting for Verge, who won a car and a rent-free year in Jenner's swanky LA pad. "He's a really funny guy - he's always got something to say."
Brandeis and Oscar
With the announcement that the Rose Art Museum is closing, it's been a bad few weeks at Brandeis. But not for the film studies department, which next week welcomes "Revolutionary Road" actor Michael Shannon to campus. Shannon is the fourth Oscar nominee to visit this year, joining Richard Jenkins, Melissa Leo, and Werner Herzog. Shannon will be there Feb. 12.
Stein out at UVM
And you thought Vermont was tolerant, right? Writer-comedian Ben Stein has withdrawn as commencement speaker at the University of Vermont because of complaints about his views on evolution, the Associated Press reported yesterday. UVM President Daniel Fogel, who chose Stein based on a warm response the visitor got at a campus lecture last spring, says he was deluged with e-mails from those who find Stein's views offensive. Fogel said that when he told Stein about the criticism, Stein - who was to be paid $7,500 - backed out of the May 17 event. "I did not ask him not to come," Fogel told the AP. "I was not going to let him be blindsided by controversy." The former host of "Win Ben Stein's Money" has drawn fire for criticizing evolutionary theory and favoring intelligent design.
A Kennedy takes Action
Joe Kennedy III will speak to the board and staff of the Robert F. Kennedy Children's Action Corps at the Four Seasons today. The 28-year-old Harvard Law student plans to talk about how he and others have carried out his grandfather's beliefs that a healthy society cares for all its children, organizers said.
Artist with a posse
As expected, the opening party for Shepard Fairey's show at the Institute of Contemporary Art drew quite a crowd last night. Guests included the artist's parents, who came up from South Carolina, as well as his wife, Amanda. Other gallery gawkers included ICA board president Paul Buttonwieser, philanthropist art collector Barbara Lee, Puma's chief creative officer Antonio Bertone, Fresh cofounder Lev Glazman, and Jim Foster of the James and Audrey Foster Prize fame. But we hear that the real crush is for Friday's sold-out Experiment shindig at the ICA. (Fairey will DJ the bash.) Scrolling around Craigslist this week, we saw somebody selling two $25 tickets to the event for a cool $500.
Banq is named world's best new restaurant
Boston's Banq is named the world's best new restaurant in the latest issue of trendy Wallpaper magazine. (The selection appears in the mag's annual Design Awards issue.) Since owners Mark Raab and Hemant Chowdhry opened the place a year ago, several celebs have stopped by, including Kate Hudson, former blink-182 singer Tom DeLonge, wrestler John Cena, "Rescue Me" actor Daniel Sunjata, actor/comedian Dane Cook, actors Brandon Barash, Bradford Anderson, and Jason Thompson, and actress Julie Berman.
Bobby Brown and girlfriend expecting
Is Bobby Brown going to be a daddy again? Us Weekly reports that the Roxbury R&B singer is expecting kid no. 5, with girlfriend and manager Alicia Etheridge. The mag quotes his agent, Ravi Dabiesingh, confirming the report. "There aren't too many details out there right now, but we do know he is very excited, as Bobby is big on family," Dabiesingh reportedly told the mag. "The sex of the baby is not known yet, and we can confirm she is four months along." Brown is father to 15-year-old Bobbi Kristina, with ex Whitney Houston, and has three children from previous relationships: Landon, LaPrincia, and Bobby Jr.
Wahlberg backs Piven with fighting words
Mark Wahlberg is tired of people giving Jeremy Piven a hard time over his fight with mercury poisoning. "Entourage" star Piven recently left the Broadway revival of "Speed-the-Plow," saying doctors advised him to quit. But after he was spotted at clubs and celeb events, show producers filed a grievance with the Actors' Equity union, E! Online reports. "It's unfortunate. There's no one more disappointed about it than him," Marky Mark, an "Entourage" producer, told the gossip site. "These Broadway guys . . . do I gotta go beat these guys up or what?"
Prime time with Tony Blair
Though Tony Blair's Monday lecture at Tufts was all about the serious stuff - Middle East conflict, famine, and disease in Africa - the former British prime minister did get a few laughs. When asked whether he had any regrets from his tenure as prime minister, Blair responded: "Yeah, plenty. But that's for me to know and you guys to try to find out."
'Into' them
The stars of "He's Just Not That Into You" turned out for the movie's LA premiere the other night, and our Ben Affleck was among them. Joining Ben were a bevy of A-list actresses, including Jennifer Aniston, Scarlett Johansson, Jennifer Connelly, BU grad Ginnifer Goodwin, and Drew Barrymore, who told reporters she knows a thing or two about being dumped. "I've drunk at the fountain of rejection many times. I was even broken up with by the same guy twice," she said. "I was a mess my friends had to clean up. Of course, it was easier the second time."