J. Geils is together again 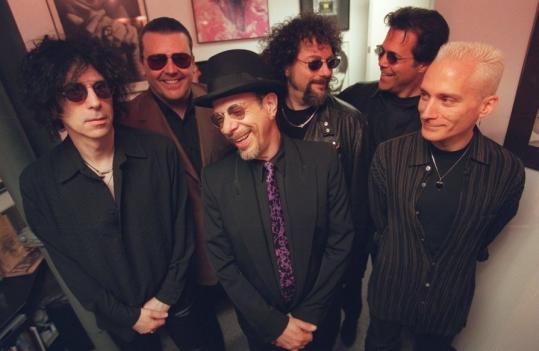 It's safe to say that tickets to see the J. Geils Band on stage at the House of Blues Feb. 19 will be hard to come by. The show, which has been rumored for a while but was only nailed down yesterday, should be a suitable spectacle to open Live Nation's new Lansdowne Street concert venue. Since breaking up in 1985, J. Geils has not made a habit of re-forming. In 2006, Peter Wolf, Seth Justman, Jay Geils, Magic Dick, Danny Klein, and Stephen Jo Bladd jammed at Klein's 60th birthday party at Scullers, playing a short set that included "Homework," "Looking for a Love," and "Give It to Me." The band, minus Bladd, also killed at an '05 fund-raiser for the Cam Neely Foundation, playing revved-up versions of "Ain't Nothin' but a House Party," "Must of Got Lost," "Centerfold," and "Love Stinks." But the band's been silent since, with Wolf concentrating on his solo career. (The singer's latest CD is done and due out this year.) Promoter Don Law says he wasn't sure how the enigmatic frontman would respond, but figured it was worth asking. "We made them an offer, sure, but it's more than money," said Law, reached yesterday in LA. "These guys love this kind of venue and are tied into the history of the blues. This just makes perfect sense." The show will be officially announced in a few days, and then tickets - all 2,400 of them - will go on sale. "We're thrilled Peter took this seriously," said Law. "We've tried before without success."

Day of remembrance
Harvard Law prof Charles Ogletree Jr. was the featured speaker yesterday at Partners HealthCare's annual day honoring Dr. Martin Luther King Jr. Ogletree, a mentor and teacher of both Barack and Michelle Obama and now a senior adviser to the president, talked to employees at Brigham and Women's Hospital in the morning and to employees at Mass. General in the afternoon. Previous speakers in the Partners series include Bill Russell, the Rev. Bernice King, Julian Bond, and professor Anita Hill.
Off and on the dial
Gil Santos reads the scores for a final time tomorrow. The morning sports anchor on WBZ Radio is all done after 38 years on the job. (Santos, 70, will continue his Pats play-by-play duties on WBCN.) So who'll succeed him? Temporarily at least, the job will be handled by Bob Lobel. The former WBZ-TV sports anchor will be on the air Feb. 3-6. "It's an honor to be able to follow a legend, even if it's only for a week," said Lobel, who bid farewell to WBZ-TV last April. . . . Meanwhile, supporters of Lovell Dyett say they're unhappy that the longtime WBZ Radio host isn't being returned to his old timeslot, Saturday 9 p.m. to midnight. (Laid off earlier this month, Dyett and Steve LeVeille were both brought back this month, but Dyett has been given a show on Sundays at 4:30 a.m.) "People are angry. This is not equity," said the Rev. Bruce Wall. "Lovell has been banished. They gave him a slot to shut people up." Wall said he's planning to organize a protest in the coming days.
Running the pizza play
Pats coach Bill Belichick and one of his boys were into Papa Razzi in Wellesley the other night, eating a wood-fired margherita pizza, Caesar salad, and sorbetto.
Going green
Watching the Celtics take on the Sacramento Kings last night at the Garden were Bruins' captain Zdeno Chara, Patriots Larry Izzo and Jarvis Green, and former Celtic Scot Pollard.
Phoenix's bad rap
As just about everyone suspected, Joaquin Phoenix isn't reinventing himself as a rapper. Entertainment Weekly reports that the actor is perpetrating an elaborate Andy Kaufman-like hoax with the help of his brother-in-law Casey Affleck. (Affleck's wife, Summer, is Joaquin's sister.) Phoenix, who earned an Oscar nod for his portrayal of Johnny Cash in "Walk the Line," claimed that he was done with acting and was instead pursuing a career in hip-hop. Affleck was said to be documenting the transition on film. (YouTube has clips of Phoenix's sorry performance at a Vegas club Jan. 16.) But, citing someone who worked with Phoenix, EW now reports the whole thing is a hoax. What a relief.
Palm Beach confidential
Dale Roberts hosted a dinner party at the Mandarin Oriental Hotel last night for Laurence Leamer, author of the new Palm Beach expose "Madness Under the Royal Palms: Love and Death Behind the Gates of Palm Beach." The guest list included several of Leamer's friends from his days in Boston, including Marilyn Riseman, Joyce Kulhawik, Stephen and Anne Cucchiaro, and Dr. John Cohen.
Marshall is out at 'BOS
WBOS program director Dana Marshall was shown the door yesterday. Marshall, who previously was PD at WXRV, told us she's proud of the job she did at the station. "I'll miss those who I did great radio with and look forward to the next adventure," she said in an e-mail. "February marks five years free of breast cancer, so even this bad news can't overshadow that. I've been blessed in many ways."