It's her party, she'll dance if she wants to 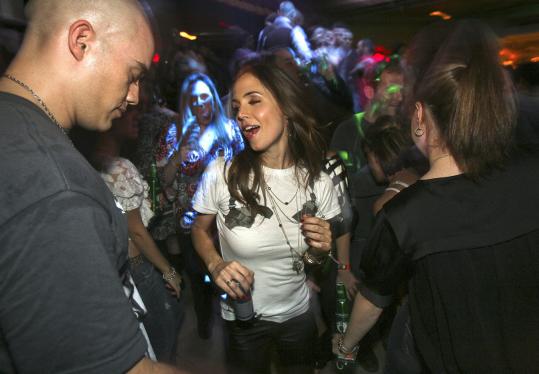 How does "Dollhouse" actress Eliza Dushku celebrate her birthday? She dances nonstop. The star of Joss Whedon's much-anticipated new show threw herself a 28th birthday bash at The Estate Saturday, and boogied in black leather pants all night long. The actress, who hails from Watertown originally, was surrounded by dozens of family and friends, including new beau Brent Bolthouse, the LA-based nightclub owner and impresario who's appeared on "The Hills." (Dushku formerly dated Dodgers pitcher Brad Penny, who may well wind up signing with the actress's beloved Red Sox. . . . Wouldn't that be interesting?) The crowd at Ed and Joe Kane's Back Bay club also included the Big Papi's better half, Tiffany Ortiz, "Fantastic Four" actor and former Gisele Bundchen boyfriend Chris Evans, Shag owner Sandy Poirier, and "On Broadway" actor and producer Lance Greene.

Depending on whom you believe, Tom Brady and Gisele Bundchen are either still engaged or still not engaged. The couple, who returned to New York from Boston Saturday afternoon, haven't formally denied a TMZ.com report that the Pats QB popped the question on board a private jet Christmas Eve. A source close to Brady says it's a go, but members of the pair's respective families say no. Brady and Bundchen, meanwhile, remained mum yesterday.

The DeCordova Museum and Sculpture Park has announced that sculptor Ursula von Rydingsvard is this year's winner of the $25,000 Rappaport Prize. What's interesting is that the prize is supposed to recognize world class art created by someone nurtured in New England. At least that's what Phyllis Rappaport, chairwoman of the Jerome Lyle Rappaport Charitable Foundation says in the press release. While it's true that a von Rydingsvard sculpture, "ence pence," has been on display at the DeCordova since 2001, she was born in Germany, studied in Florida, and lives in New York City. Previous winners of the prize include Jennifer Hall, Annee Spileos Scott, Lars-Erik Fisk, John Bisbee, Debra Olin, Sarah Walker, Abelardo Morell, and Mar??a Magdalena Campos-Pons.