Hitting the links with Big Papi 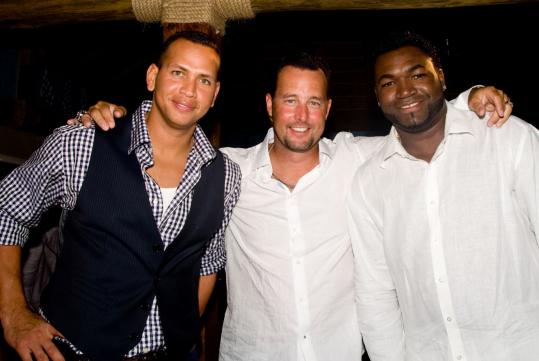 While the season's first snow was falling here, the boys of summer were living it up in the Dominican Republic. Sox slugger David Ortiz hosted his inaugural celebrity golf tournament over the weekend, and several heavy-hitters made the scene. Showing up to support Big Papi were Sox players past and present, including Tim Wakefield, Clay Buchholz, Sean Casey, Pedro Martinez with wife Carolina, and should-be Hall of Famers Luis Tiant and Jim Rice. Also hitting the links were local sports legends John Havlicek and Bobby Orr, dreaded Yankee Alex Rodriguez, and dreadlocked Angel Vladimir Guerrero. We're told a paparazzi helicopter with a camera mounted on the front was trailing A-Rod during his round of golf, and at one point was hovering just 150 feet over the green as he tried to putt. (Maybe a relationship with Madonna isn't such a good idea after all.) Buchholz, by the way, has moved on from Erica Ellyson, the former Penthouse Pet of the Year with whom Clay was canoodling last season. The pitching prospect was arm-in-arm over the weekend with "Deal or No Deal" model Lindsay Clubine. The four-day fund-raiser for the David Ortiz Children's Fund raised hundreds of thousands of dollars to help stricken kids in the Dominican and around New England.

Road trip
Tom Brady's long road to recovery took him to Miami the other night, where he joined a slew of celebs at a party hosted by the German automaker Audi. Brady, who just happens to drive an Audi S8, joined Best Buddies founder Anthony Kennedy Shriver, actor Benicio Del Toro, artist Julian Schnabel, actress Kirsten Dunst, Mary Kate Olsen, Ivana Trump, and Boston Common publisher Jason Binn at the Delano Hotel. The highlight of the evening was a short set by the still-mesmerizing Grace Jones, who performed "Warm Leatherette" and, appropriately, "Pull Up to the Bumper."
Good work
Celtics brass Bob Epstein and Wyc Grousbeck were at the welcome party for Derrek Shulman, the Anti-Defamation League's new regional director. The champs have partnered with the ADL on a series of billboards urging "RESPECT." (Epstein's wife, Esta, is chair of the ADL board.) Others at the event included Wall Street wizard Peter Lynch, Boys & Girls Clubs president Linda Whitlock, and the evening's MC, former WBZ-TV reporter Kasey Kaufman, who recounted the anti-Semitism she encountered in her early days in Boston. . . . Bruins better halves Krissy Kobasew and Kelly Ward were at Toys for Tots's Boston warehouse yesterday sorting holiday goodies. The suddenly unbeatable Bruins are collecting toys for kids at their home games Dec. 8, 13, 18, and 20.
On the town
After being stomped by the Celts Friday, Portland Trail Blazers Greg Oden, LaMarcus Aldridge, Rudy Fernandez, Jerryd Bayless, and Nicolas Batum stretched their legs at Ed Kane's club Estate. The next night, reality TV type Deanna Pappas of "The Bachelorette" stopped by the Back Bay joint and briefly joined DJ Costa on stage. . . . A full house showed up for Saturday's midnight screening of "Repo! The Genetic Opera," and the costumed crowd at the Coolidge Corner Theatre hung around afterward for a lively Q&A with director Darren Lynn Bousman and screenwriter Terrance Zdunich.
Vote early...
Congrats to little Carly Romanow, the 6-year-old Sharon girl who's a finalist for Gap's 2008 Casting Call contest. Romanow was plucked from a pool of nearly 900,000 cuties countrywide. She's one of five finalists in her GapKids category, and one of 20 finalists overall. Starting today, Carly's photo and those of other finalists will be in babyGap and GapKids store windows. You can vote for your favorite finalist at www.gap.com/castingcall.