Filming on the North Shore 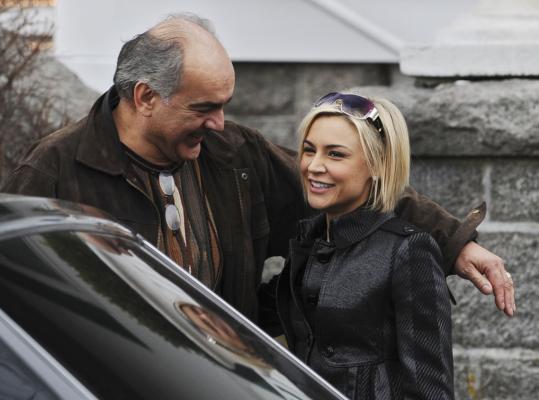 Samaire Armstrong joined her "Dirty Sexy Money" costar Wade Williams this week on the set of "Hatteras Hotel," the murder-mystery filming in Rockport and Gloucester. Armstrong plays Roxanne, a girl "involved in a murder or two, a potential suspect and love interest," she said. Is she the killer of a woman - played by actress Stephanie Lemelin - found drowned in the harbor? Armstrong said she's not sure. "That was one of the things that got changed a few times during filming. . . actually. Who did it? I'm excited to see how it comes out." Meanwhile, Williams is enjoying playing big-time detective turned small-town police chief Ian Martin, who struggles with sobriety. "I've been having fun playing drunk and sobering up," he said. Luckily, the "whiskey" is just diet cola. "If I really drank alcohol in this, I'd have alcohol poisoning," he cracked. By the way, both actors have local connections. Armstrong spent turkey day with her boyfriend and his family in Concord, and Williams's dad, Father Theodore Williams, is a Russian Orthodox monk in Brookline. "My dad and one of his partners in crime visited the set," Williams said. "They were walking around in their long black robes and stovepipe hats. People were like, who are those guys?"

Sent packing, Nolan sues CN8
Barry Nolan (inset), former host of CN8's "Backstage With Barry Nolan," has filed a lawsuit in Middlesex Superior Court, claiming the station violated his civil rights when it fired him for railing against Bill O'Reilly. Nolan so passionately opposed the conservative Fox News yakker receiving the prestigious Governor's Award from the Boston chapter of the National Academy of Television Arts & Sciences in May, he distributed a lengthy document highlighting O'Reilly's gaffes, errors, and sexual harassment complaints. CN8 fired Nolan soon after. Now, he's asking a judge to compensate him for his suffering, as well as his attorney's fees. Nolan's former supervisor, Eileen S. Dolente, and CN8 general manager Jonathan R. Gorchow, both of Pennsylvania, are also named in the suit. In the complaint, Nolan claims Dolente threatened his job and told him not to "make a scene" at the awards dinner. When he refused to comply, the station found an excuse to fire him, Nolan claims. "How ironic that CN8 would pay Nolan to express controversial opinions (obviously to increase viewership and ratings) and would then fire him for expressing his views before a trade association that has nothing to do with the Station, but everything to do with maintaining the integrity of the professional (sic) he practices," his attorney, Laura R. Studen, said in an e-mailed statement yesterday. CN8 is, of course, playing it close. "As a matter of policy, we do not comment on litigation or other legal matters," said Tim Fitzpatrick, a Comcast spokesman. "But we stand by our actions and intend to defend this lawsuit vigorously."

Blogging blues
Boston Magazine is the latest media company to respond to the widespread economic pain by letting go employees, one of whom is popular Boston Daily blogger Amy Derjue. The one other layoff was an administrative position, said magazine president Randy Hano. "Obviously you hate to let one person go, but it's been a relatively small number to what we've got," he said. "It's always painful. But we're trying to be as smart as possible." Derjue, who got the boot just before Thanksgiving, is blogging about her status at www.pasquinader.blogspot.com. "I'm just glad everyone read it and it had such a good response," she said, of her former column. "That's just the way the business is right now. Unfortunately, I was the one who had to go. But I'll keep blogging and hopefully keep writing in Boston."

Watch the birdies
We know envy is a deadly sin, but we can't help but wish we were going to be among the heavy-hitters at the David Ortiz Golf Classic this weekend in the Dominican Republic. Big Papi's big bash raises money for the David Ortiz Children's Fund, which supports medical care for kids in New England and the Dominican Republic. Among the "celebrity captains" expected to wing in for the VIP kickoff last night: Alex Cora, Jed Lowrie, Bobby Orr, Justin Masterson, Luis Tiant, and Alex Rodriguez. (For the record, Madonna is slated to perform in Argentina all weekend.)

Plot twist
Eliza Dushku's character in the new movie "Nobel Son" is beyond quirky. "She's a twisted mess," says the actress, who grew up in Watertown. "I auditioned my heart out for this part because it was an opportunity to work with [director] Randy Miller and to do something very different for me - to show some vulnerability." The movie, which stars Alan Rickman as an arrogant and equally twisted college professor, opens today. "It's a smart movie for smart people," says the actress. Vulnerable is indeed different for Dushku, who is the strong-willed star of Joss Whedon's much-anticipated new show, "Dollhouse," debuting Feb. 13. "Don't believe anything you've read on the Internet," Dushku (right) told us this week. "The show's fascinating."

Lehane has his 'Day'
Dennis Lehane signed copies of his latest mystery, "The Given Day," at the Boston Public Library Wednesday night. After his appearance, part of the Lowell Lecture Series, the author was feted by library bigwigs at a private reception.