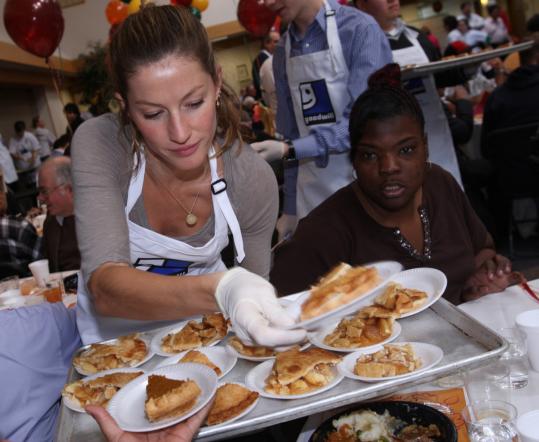 Tom Brady and his supermodel sweetheart Gisele Bundchen surprised everyone at yesterday's annual Thanks-for-giving meal organized by Goodwill Industries at its Roxbury headquarters. Walking without a limp, the Pats QB upstaged a slew of pols who were present, including Senate President Therese Murray, House Speaker Sal DiMasi, Attorney General Martha Coakley, Environmental Affairs Secretary Ian Bowles, embattled City Councilor Chuck Turner, and Hizzoner Tom Menino, who tried without success to coax No. 12 to the microphone. (Also there were were CEO Tom May and the Boston Foundation's Paul Grogan.) Bundchen arrived first, and quickly put on an apron and got down to work dishing out stuffing, mashed potatoes, and squash. (We spied the slender siren sneak one bean.) Brady showed up as the tables were being cleared, and was greeted by Bundchen with a kiss on the cheek. Later, Brady signed a few autographs while Gi, who seemed to be genuinely enjoying herself, chatted with folks and moved to the music. . . . Speaking of Brady, Maria Menounos called to clarify something. She says she didn't mean to suggest that the Pats should permanently replace the two-time Super Bowl MVP with Matt Cassel. In an item this week hyping her "Access Hollywood" interview with Ashley Dupre, Menounos told us she's been impressed with Cassel's passing progress. But that's as far as the infatuation goes. "Matt will be a wanted man after the season, no question," the Medford native says of Cassel, who will be a free agent. "But there's no replacing Tom Brady. Period."

Former BSO music director Seiji Ozawa was back at Symphony Hall yesterday, where he haunted the halls for 29 years until stepping down in 2002. The maestro makes his triumphant return tomorrow afternoon and Saturday, when he'll lead the BSO in an all-French program. We're told Ozawa's planning to go to the Celts Friday night and to the Pats game Sunday. . . . Happy to hear Chet Curtis is on the mend. We're told NECN newsman Curtis went into the hospital for routine knee surgery and ended up getting a nasty infection that led to serious complications involving his kidneys.

Whole lotta love
Led Zeppelin's Jimmy Page and John Paul Jones paid a backstage visit to Extreme at the Boston band's gig in London this week. The rock royalty, who're rumored to be looking for a replacement for frontman Robert Plant, posed for a few pictures with Extreme bassist Pat Badger, drummer Kevin Figueiredo, guitarist Nuno Bettencourt, and singer Gary Cherone.
Here and there
Director Walter Hill set up shop this week at the Westin Boston Waterfront to shoot scenes for the SpikeTV pilot "War of '04." The talented cast of the two-hour pilot, which is being produced by Ultimate Fighting Championship president Dana White, includes Matthew Marsden and Kevin Chapman, Michael Mulheren, David Patrick Kelly, William Lee Scott, Tim Murphy, and Mircea Monroe. . . . FYI jazz fans: NPR's "Fresh Air," hosted by Terry Gross, features a tribute today to the late great pianist Dave McKenna, a Woonsocket, R.I., native who tickled the ivories for many years at the Copley Plaza Hotel bar. The show includes McKenna's music and an interview with his sister Jean McKenna O'Donnell.
Star turns at Brandeis
Actors Alan Alda and Kate Beckinsale will be at Brandeis Wednesday to screen their new movie "Nothing But the Truth," with a Q&A afterward moderated by Brandeis alum Scott Feinberg, who covers the Oscar race for the Los Angeles Times.
'Bad apple' Manny
Details disses former Sox slugger Manny Ramirez in its new issue. The men's mag lists Manny on its list of "Power Tools," guys who managed to achieve nothing in 2008. Described by the editors as a "bad apple," Ramirez got his way in 2008 by "refusing to try and trashing the Red Sox."
Black and gold, and green
Bruins defenseman Andrew Ference delivered dozens of turkeys to the Pine Street Inn yesterday. A big environmentalist, Ference delivered the turkeys in an eco-friendly hybrid vehicle provided by the Boston-based transport service PlanetTran.