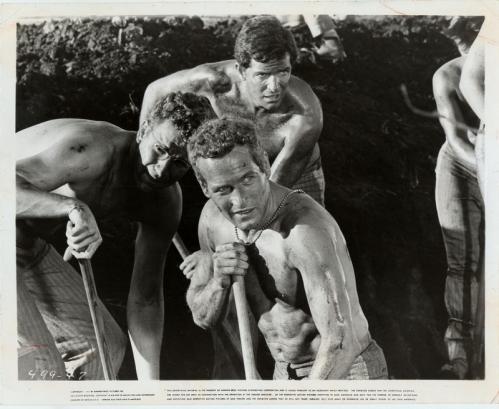 Paul Newman made a second career of responding to his movie stardom with a self-effacing shrug and the occasional raspberry. (Hardly anyone agreed with him; those who did usually came around after seeing the movies.) In his comments to the press, though, you could glimpse a canny, cantankerous survivor who preferred taking on the business from the outside.

"Because it’s more of a challenge.” -- Newman's usual response when asked why he considered himself Jewish.

"It was his theory that he had to keep things off balance or it's finito." -- From a 2003 Time article on Newman's Own, written by the star in the third person.

"I wasn't driven to acting by any inner compulsion. I was running away from the sporting goods business." -- Newman on the family store.

"I was monkey see, monkey do. Man, I just sat back there and watched how people did things and had enough sense not to open my big mouth." -- Newman describing his studies at the Actors Studio, where classmates included James Dean, Marlon Brando, Karl Malden, Geraldine Page, Kim Stanley, and Eli Wallach.

"Paul Newman, a recruit from Broadway and video, bears a striking resemblance to Marlon Brando, but his contribution is hardly outstanding... He is given mainly to thoughtful posing and automatic speechmaking.” -- From a New York Times review of "The Silver Chalice," Newman's first film.

“It should have been Jimmy Dean. If he had played the part, everything would have been different." -- Newman on his star-making role in "Somebody Up There Likes Me."

"It's so comforting not to have to be a movie star." Newman on his role in "The Verdict."

"My girlfriend mentioned that you were a movie star... If you act as well as you cook, your movies should be worth watching." -- Letter to the star from a satisfied Newman's Own customer.