Packing up their knives... and hitting the road 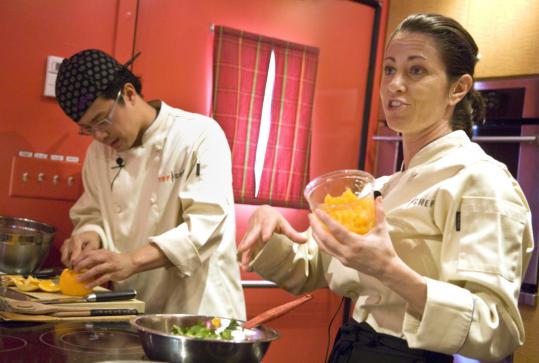 Dale Talde and Nikki Cascone, a couple of the foodies from season four of Bravo's "Top Chef," did a cooking demo for fans outside the Whole Foods in Cambridge yesterday. The pair of epicureans pulled up in an 18-wheeler outfitted with a state-of-the-art kitchen as part of a promotional tour for the reality show.

And the winner is...
It was a tough decision, but Keith Lockhart last night chose Katie Mayhew, a student at Martha's Vineyard Regional High School from among three finalists in the Boston Pops High School Sing-Off. As a reward, Mayhew will perform with the Pops at Friday's Fourth of July extravaganza. The selection was announced after the contestant's final performance with Lockhart and the Pops at Symphony Hall last night. Mayhew sang "Being Alive" from "Company." Helping Lockhart judge the students' vocal stylings last night were Joyce Kulhawik and Michael Mushalla.
Homeboys get together
It's hard to believe New Kids on the Block had never recorded, or even performed, with their Boston boy band predecessors New Edition. Until now. The two man bands got together in an LA studio last week and cut a track that likely will appear on NKOTB's new album. "We've always sort of dreamed about getting together with those guys," New Kid Joey McIntyre told us yesterday. "We're just so proud to be working with them. Really, they were our idols growing up. We put them on a pedestal." The song, called "Full Service," was co-written by Donnie Wahlberg, producer Nadir "RedOne" Khayat, and New York dance-pop diva Lady GaGa. "The fun part was, at the end of the session, laughing to tears about all those road stories, about the characters that are part of this business," said McIntyre. New Edition's Ralph Tresvant, Ricky Bell, Michael Bivins, and Ronnie DeVoe all made the scene, but Bobby Brown was MIA. Joey Mac said the two groups were silly in the studio but also serious. "There was a lot of jumping around and posturing," he said, "But one of Ralph's friends is a preacher, so before we started we said a little prayer. . . . It was cool." The new NKOTB CD comes out in early September with a US tour to follow.
Radius chef off to NY
He hates to win and run, but Radius chef Patrick Connolly is moving on. After scoring a James Beard Award for best chef in New England last month, he's headed to New York. "I'm not exactly at liberty to say where yet," he says. "I signed the papers Monday." Any hints? "It's a young restaurant, but it's an existing restaurant. It's in the Village." Connolly, 30, will be executive chef and partner. Tomorrow will be his last night of service at Radius. He's been at the restaurant, which serves modern French food, since 2003. "It's not a surprise," says Radius co-owner Christopher Myers. "It's not even bittersweet. We're completely excited for him." Radius isn't announcing a new chef just yet. "For the time being, it's sort of up to the sous chefs to battle it out for a little bit."
Sox, Pats, Celts abound
The 2008 ESPY nominations are rife with Sox and Pats and Celts. Tom Brady is up for best male athlete, battling Tiger Woods, A-Rod, and Kobe Bryant. The Sox and Celtics are in the running for best team, competing against four others, including the New York Giants. Terry Francona and Doc Rivers are nominated for best coach, Josh Beckett for best championship performance in the MLB playoffs, and Brady and Randy Moss are up for best record-breaking performance. Sadly, the Giants also make the list for best upset. Y'all know which game. Fans can vote at espn.com through July 12. The awards show, hosted by Justin Timberlake, will air July 20 on ESPN.
Very sharp 'Pants'
Joey "Pants" Pantoliano wants everyone to know it's OK to share. "It's actually cool and sexy to talk about our feelings," Pantoliano instructed, in a nonstop five-minute phone monologue yesterday. (Breathe, Pants, breathe.) The Sopranos Mafioso, known for having his decapitated noggin' tucked into a bowling bag, was hanging out at McLean Hospital in Belmont, filming "Hope Messengers," a documentary on mental health. "I'm trying to get to the bottom of my own insanity," he confided. Three years ago Pantoliano was diagnosed with clinical depression, after recognizing some of his mother's bipolar behavior in the role played by his "Canvas" costar Marcia Gay Harden. Since then, the Pants-man has blogged and spoken out about mental health issues, and started a nonprofit - the deceptively happy-sounding No Kidding, Me Too! - with like-minded entertainment types. On his advisory board of supportive friends: Jeff Bridges, Edie Falco, Matt Dillon, Robert Downey Jr., and Robin Williams. Pantoliano is doing better these days, thanks to a combination of talk therapy, medication, exercise, and a healthy diet, he said. And he knows what to nix. "I have tried drugs, alcohol, sex, shopping, more sex, eating, and even more sex, to get to the bottom of what's in my brain," he said. "It doesn't work."

All that glitters on the boardwalk
Diamonds are a girl's best friend, as Medford native Maria Menounos amply demonstrated at this week's opening of the first Hearts on Fire store in the United States. The "Access Hollywood" correspondent was joined at the event at the Shoppes at The Water Club in Atlantic City by actress Molly Sims and Victoria's Secret model Selita Ebanks.