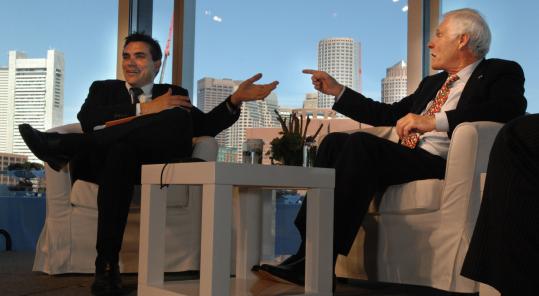 Ted Turner was his typical plain-spoken self yesterday at the Institute of Contemporary Art, where he was touting the advantages of going green. The media mogul-turned-philanthropist owns a chain of 55 eco-conscious restaurants called Ted's Montana Grill - there's one in Westborough - and now he wants the rest of the restaurant industry to cast its lot with the conservation crowd. Flanked by chef Todd English and Ted's Montana Grill cofounder George McKerrow Jr., Turner faulted politicians for their lack of leadership on environmental issues. "We can't afford to have [dummies] running this country and world any more," he said. He didn't stop there. Talking about the war in Iraq, Turner said: "The young men that are over there dying would be good restaurant customers if they were over here."

Buddy: the one and only
One way or another, it looks like the Buddy Cianci story will finally make it to the big screen. The infamous former mayor of Providence told us yesterday he's inked a deal with Robert De Niro's Tribeca Productions film company to make "The True Story of Buddy Cianci, America's Most Notorious Mayor." "This is going to be the true account of the rise and also the fall," said Cianci, who brokered the deal with De Niro's business partner Jane Rosenthal. "It'll be an interesting story of politics and ethnicity. There is an element of tragedy, but also a lot of funny, compelling stuff." A flamboyant character, Cianci served two stints as mayor of Providence - 21 years in all - and is widely credited with helping revive the city's image and economy. But in 2001, while mayor, he was indicted on a host of corruption charges. Though acquitted of the most serious offenses, Cianci was convicted of conspiracy, and sentenced to five years in federal prison. Last year, he was released to a halfway house in Boston, and soon after returned to Providence. Asked who should play him in the movie, Cianci said: "I'll leave that to the experts. . . . Someone young and handsome, let's put it that way." This isn't the only Buddy biopic in the works. Just yesterday, the Hollywood Reporter wrote that Robin Williams has signed up to play a corrupt pol in a movie based on Mike Stanton's book "The Prince of Providence." The movie, which has been in the works for a few years, will star Oliver Platt as Cianci. (David Mamet wrote the script and Michael Corrente is set to direct a cast that also includes Dermot Mulroney, Adam Goldberg, Bradley Cooper, and Ed Burns.) Rosenthal told us the Tribeca-produced project is the only one sanctioned by Cianci, and that's important. "There are stories only Buddy knows. You can't make that stuff up," she said. "I grew up in Providence, and there's always been Buddy the good and Buddy the questionable, and that's the source of great drama."
You're a green one, Mr. Grinch
How does the Grinch spend his summer? Making promotional appearances. Yesterday, the green guy was at the Wang Theatre to hype the 2008 production of "Dr. Seuss' How the Grinch Stole Christmas! The Musical" in Boston. (The show plays from Nov. 26 to Dec. 28.) Played by William Ryall, the Grinch made his way down the theater's grand lobby staircase singing "One of a Kind," after which he was joined by Cindy Lou Who - a.k.a. Caroline London - while crooning "Santa for a Day." A big Celts fan, the Grinch was given a Paul Pierce jersey.
Remembering Robert Kennedy
The oldest of Bobby Kennedy's 11 children, Kathleen Kennedy Townsend, discussed her father's legacy at last night's Robert F. Kennedy Children's Action Corps gala, held at the JFK Library. Forty years after RFK's assassination, the former Maryland lieutenant governor presented Embracing the Legacy awards to Ellen Bassuk, Don Rodman, Gerry Wright, and Barry Zuckerman for their contributions to improving the lives of children and families.
Gisele's new jet
Gisele Bundchen has bought herself a sweet new ride, and we're not talking about a sports car. Word is Tom Brady's globe-trotting girlfriend has joined the ranks of the rich and famous who have their own jet. We're told the supermodel, who spends a ton of time each year traveling to photo shoots around the world, has purchased a Gulfstream G550 for $50 million. The super-fast jet, which can carry up to 19 people, will enable Bundchen to bop from the US to Sao Paulo to Paris without worrying about connections or waiting in lines. We're told the glamour girl settled on the Gulfstream G550 after looking at the Global Express XRS - the private jet preferred by Oprah Winfrey - the Falcon 7X, and a model made by a company in her native Brazil. It'll be a while before she can board her fancy new bird. It won't be ready until 2010.
Dinner for two
Leonardo DiCaprio and Israeli supermodel Bar Refaeli were spotted dining at KO Prime Tuesday night. DiCaprio, in town to shoot "Ashecliffe" with director Martin Scorsese, reportedly shared oysters, chopped salad, T-bone steaks, and a glass of wine with his main squeeze at the trendy Tremont Street steakhouse.
More fun and games
We're told Ben Affleck and Matt Damon will be courtside before tonight's Game 4 tip-off at the Staples Center to tape a segment with talk-show host Jimmy Kimmel. You'll recall that Kimmel's girlfriend Sarah Silverman made a silly video called "I'm (Bleeping) Matt Damon," and Kimmel responded with a video of his own called "I'm (Bleeping) Ben Affleck." No word on who'll be (bleeping) whom tonight.
Signing off at 'BZ
Pat Kreger, who held top positions in the news, sales, and public affairs departments at WBZ-TV (Channel 4) for the past 30 years, is leaving to become a communications consultant. "I've been on the forefront of history, but I think it's time to go on to the next chapter," Kreger (inset) said yesterday. After starting as an intern at Channel 7, Kreger worked her way up to become the first woman to produce the 6 p.m. news at Channel 7. After joining Channel 4, she worked on the news side for 16 years before moving to the sales department in 1994. For the past 11 years, Kreger was public affairs director at Channel 4, spearheading the station's involvement with Children's Hospital, the July Fourth fireworks display, and the MFA.

Correspondent Susan Chaityn Lebovitz, and Don Aucoin, Joseph P. Kahn, and Joanna Weiss of the Globe staff all contributed. Names can be reached at names@globe.com or at 617-929-8253.