An opening with star power 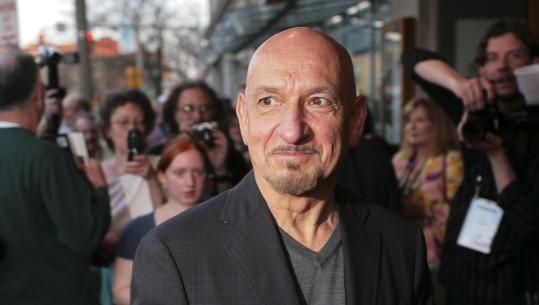 When Boston-based producers Michael Williams and Todd Dagres hosted "Transsiberian" writer-director Brad Anderson last fall, he had only scenes from the thriller to show audiences. Last night, "Transsiberian" star Ben Kingsley (above) was at the Somerville Theatre as the drama opened the Independent Film Festival of Boston. "It's been at Berlin and Sundance," Dagres told us yesterday. "It's nice to have the whole film here for Boston audiences to enjoy." The movie, which also stars Emily Mortimer and Woody Harrelson, took several years to make. Dagres said he's glad the project took so long, if only to have Anderson be happy with the outcome. "I get involved in independent films because it's the one place where people like Brad can tell great stories," said Dagres, who's a venture capitalist at Spark Capital. "This story was based on Brad's experiences, and it had to reflect his vision."

Suggesting to Emmett "His Many Lightnings" Eastman that he's the Forrest Gump of Native Americans makes him laugh. Eastman, one of 250 participants in the five-month cross-country trek known as The Longest Walk II, took a break from that event to run his second Boston Marathon, which he finished in just over six hours on Monday. His five-day stopover in Boston included meeting Red Sox outfielder - and fellow Native American - Jacoby Ellsbury before Tuesday's game, chatting with four-time winner Bill Rodgers, meeting Mayor Tom Menino at the pre-race spaghetti dinner, and joining WBZ news crew Lisa Hughes, Jack Williams, and Steve Burton at the Channel 4 anchor desk. Yesterday Eastman, 76, finalized plans for a return trip to accept an award from Boston University Medical School on behalf of his great-uncle Dr. Charles Eastman, whose story was told in last year's HBO movie "Bury My Heart at Wounded Knee." (BU was unaware of its famous alum until the Emmy-winning pic aired.) "I run to meet people," Eastman told us. "If you keep an open mind, you never know what you'll find." Kind of like a box of chocolates.

Dinner with the mayor

The lottery system for determining which elementary schools Boston children will attend, the city's crime rate, and the supposed scarcity of taxis on the roads were the hot topics Mayor Tom Menino faced at a dinner Tuesday night at Da Vinci Ristorante. The Columbus Avenue eatery's owners - Shingara "Peppino" Singh and Wioletta Zywina - hosted a three-course dinner for more than 80 people including Channel 7 anchor Frances Rivera, 28 Degrees owner Carl Christian, Banq owner Hemant Chowdhry, Beth Israel Deaconess physician Laura Rock, and photographer Tanit Sakakini. Hizzoner expressed a few opinions of his own. Among them: One of Boston's best days is Marathon Monday. But he confessed: All those skinny runners make him feel fat.

Bruce Willis is just starting his film "The Surrogates," but he's already got Kevin Garnett and Paul Pierce's postseason exploits on his radar. Willis was slated to sit courtside last night at the TD Banknorth Garden with his lady friend, Emma Heming. "The Surrogates" producer Stephen Eads was expected nearby. Patriots linebacker Adalius Thomas was in the house, as was his boss, team owner Robert Kraft. Buddies Lenny Clarke and Donnie Wahlberg were front-row center as the action got underway. Also catching Game 2 against the Hawks were nightlife nabob Patrick Lyons and Beverly Hills personal trainer Gunnar Peterson.

Sox ace steps up and delivers

Despite a stiff neck that forced him out of the rotation for a day, Red Sox ace pitcher Josh Beckett kept his promise yesterday to meet with young cancer patients and their families at Children's Hospital Boston. Beckett and hospital CEO Dr. James Mandell spent time with a number of young people, including Mitchell DuBuc and Eshna Master. . . . After Tuesday night's game, David Ortiz was joined by a few friends for dinner at Sonsie on Newbury Street.

OK!: Another Wahlberg?
Could there be a new addition to Mark Wahlberg’s family? OK! magazine reported yesterday that the Dorchester-bred actor and his fiancee of four years, Rhea Durham, are expecting their third child. The mag says ‘‘The Departed’’ star told friends he is having a son, due in September. The couple have a daughter Ella Rae, 4, and a son, Michael, 2.

Locals land on FHM list
Being Tom Brady’s girlfriend seems to only help Gisele Bundchen stay on FHM magazine’s ‘‘100 Sexiest Women in the World for 2008.’’ The Brazilian beauty ranks No. 31 on the list, just a spot above ‘‘21’’ star Kate Bosworth, the pride of Cohasset. Pittsfield-born actress Elizabeth Banks also makes the roster, picked No. 72 by the lad mag’s readers in an online poll. Who topped the list? ‘‘Transformers’’ actress Megan Fox. And Britney Spears falls in at 100.