A seal of approval 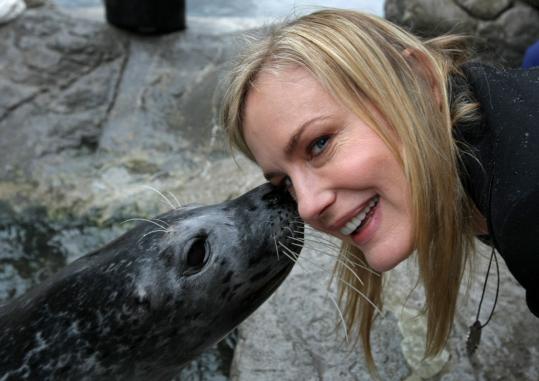 In town yesterday for the world premiere of "Dolphins and Whales: Tribes of the Ocean," actress Daryl Hannah said narrating the film was an extension of her work on and off screen. "I've been diving since I was 7," the "Splash" star told us. "As I've learned more about what's happening to our world . . . I've done more projects that educate as well as entertain." Hannah was joined at a VIP fete at the New England Aquarium by filmmakers Jean-Jacques and Francois Mantello, ocean conservationist Jean-Michel Cousteau, and oceanographer Sylvia Earle. Though she'd had hair styled by Salon Mario Russo's Gary Croteau, Hannah allowed Chuck, an Atlantic harbor seal, to give her a peck on the cheek during a tour yesterday. "I love interacting with the animals," Hannah said.

Mayer's swimsuit issue
Seen those pictures of John Mayer in the Borat-style man thong? You can thank Erin Horgan. The pixie from Plymouth snapped the pics a few weeks ago while on a fan cruise with the pop star, and immediately posted the provocative images on her blog: thatsblogtastic.typepad.com. "When I woke up in the morning, they were everywhere on the Internet," said Horgan, 22. "It was overwhelming." Called the "Mayercraft Carrier," the three-day cruise to the Bahamas was organized for Mayer's fans and featured two performances by the hunky heartthrob. At one point, the singer showed up on the deck and, in front of everyone, donned the neon green garment made famous by a certain fictional Kazakhstani journalist. "Yes, folks, I witnessed John Mayer in a man thong. It pretty much made my life," Horgan wrote on her blog. But Horgan's not so happy that she didn't copyright the images before posting them. Now, 60,000 page views later, her pictures are popping up all over, and she's not getting paid. "I just wanted to show my girlfriends some funny pictures."
After the dealing's done
Boston College officials reacted with dismay at comments made by Patrick O'Donnell in yesterday's Globe. O'Donnell won the New England College World Series of Poker Championships on Sunday at Rockingham Park, and he talked with the Globe about on-campus poker playing at BC. The problem? He's not a student. Turns out O'Donnell, 23, graduated from BC's Carroll School of Management in 2006 and now works for a technology company - despite claiming at the tournament that he was a 22-year-old BC senior. "This is a shock," said tournament director Dan Brown, who affirmed that a valid college ID was required to enter. "You try to do something special for this particular age group, then someone comes along and defrauds the innkeeper." However, Brown said he had no intention of trying to recover the $1,450 prize money that O'Donnell won. In an e-mail reply to the Globe's inquiry yesterday, O'Donnell insisted he wasn't trying to deceive anyone. He claimed that "at least a quarter" of the players were recent college grads. "I don't think I duped anyone - all the players at the table knew I was a recent grad, as did the dealers."
'Maybe' baby
Elizabeth Banks joined her "Definitely, Maybe" costars Ryan Reynolds, Isla Fisher, Rachel Weisz, and Abigail Breslin on the red carpet in LA Tuesday night for the premiere of the romantic comedy. Banks, a Pittsfield native, plays a Reynolds love interest in the flick that opens today.
Sailing in with something to sell
Former "Love Boat" stars Ted Lange and Bernie Kopell flacked for Dunkin' Donuts at City Hall Plaza, where the company was promoting its new toasted offerings yesterday. The actors, who played Issac and Doc, respectively, on the '70s TV hit, joked with fans, some of whom competed to win trips to "toasty" locales.
Wills power
Actor-comedian Will Arnett was a surprise walk-on at Will Ferrell's sold-out Funny or Die Comedy Tour stop at Boston College last night. "I was not prepared," Arnett told us yesterday. "I was talking to people in the crowd and had to rip my sweats off and jump in, but it's been really fun." Married to Burlington native Amy Poehler, Arnett was subbing for Ferrell's Funny or Die partner and pal Adam McKay. The two Wills spent yesterday at BC doing interviews for their basketball comedy "Semi-Pro," which opens Feb. 29. While Ferrell seemed to relish the chance to get out onstage, one thing he won't miss is doing his impression of President Bush. ". . . I've only done him a handful of times since I've left ['Saturday Night Live']," Ferrell said. "It's really not a part of what I do anymore."

Can they stop a blitz?
Perhaps because he was sacked so many times at the Super Bowl, Tom Brady's taking no chances while on vacation with Gisele Bundchen. Word is No. 12 and his supermodel sweetheart are in Costa Rica with no fewer than six bodyguards. The lovebirds are sunning themselves at Bundchen's multimillion-dollar beachfront estate in Mal Pais. Just like Jessica Simpson, whose dad Joe joined her on vacation in Cabo with boyfriend Tony Romo, Gisele's father is with his daughter in Costa Rica.

Olé! La Verdad
Ken Oringer's La Verdad has been chosen by Bon Appetit as one of the hottest Mexican restaurants in the country. The Lansdowne Street hangout is the only New England restaurant to make the list. A fave of Red Sox rookie phenom Dustin Pedroia, La Verdad teamed Oringer with Patrick Lyons and Ed Sparks of the Lyons Group and restaurateur Michael Ginor.

Joseph P. Kahn of the Globe staff and Globe correspondent Nick A. Zaino III contributed. Names can be reached at names@globe.com or at 617-929-8253.