Paris Hilton applies herself to Harvard 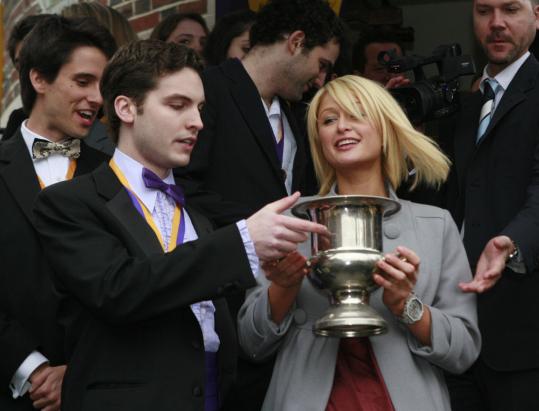 Paris Hilton honored at Harvard? Now, we've seen it all. The sandy-haired celebutante was at the World's Greatest University yesterday, where she received the Woman of the Year award from the wags at the Harvard Lampoon.

"Never in my wildest dreams did I imagine standing here," Hilton told a crowd of about 100 students. "It's really exciting and I've had such a great time."

What's to recommend Britney Spears's ex-buddy for such an accolade? Here's a hint: It's not the videotape she famously made with Rick Salomon.

"They're honoring me for being in business and my acting," Hilton explained to us. (The Lampoon "award" is also a not-so-subtle jab at the high-minded Hasty Pudding Theatricals, which is giving its Woman of the Year Award to Oscar-winner Charlize Theron today and honoring actor Christopher Walken next week.)

Hilton's visit touched off something of a bidding war among local hotels. Originally booked to stay two nights at the Four Seasons, Hilton and her entourage switched at the last minute to the Liberty Hotel, where she was put up in its $5,500-a-night presidential suite at no charge. (We're told the staff stocked her room with pink flowers, fancy bath balms, and her favorite soda: .) And Hilton seemed pleased that her mug shot is one of several celebrity booking photos hanging on the wall of the Liberty bar, Alibi, site of the former Charles Street Jail. Yesterday afternoon, she signed her mug shot and posed for a photo with Lindsey Lohan's.

"I like my mug shot. I think I have a really great mug shot," Hilton told us, laughing. "It looks like a magazine shoot." In fact, the pic was snapped after her 2006 drunk-driving arrest.

Though her trip to Boston was brief, Hilton made the most of her time. The heiress arrived in town late Monday, and promptly hit the Back Bay club Rumor with a bunch of her Harvard hosts.

"She jumped on the mike said, 'LA likes to party, but Boston is it,' " said club promoter Ace Gershfield.

With camera phones flashing, Paris also gave a post-mortem shout-out to the Patriots. (Pats Randall Gay and Eric Alexander happened to be in the house, as were NBA players Cuttino Mobley and Sam Cassell.) Paris and her posse stayed for awhile and then returned to Harvard for a private party with students.

Standing under a tent outside the Lampoon yesterday, Hilton couldn't contain her enthusiasm: "You guys are so hot! Harvard is so hot!"

Undergrads brought all sorts of items for the socialite to sign: student IDs, their Blackberrys, Harvard boxer shorts, the syllabus from a freshman sociology class, and Hilton's self-titled CD. Said junior Norman Goode, who got Paris to sign his math project. "I guess that's the quintessential Harvard experience."

Not one to sit still, Hilton was due out on the town again last night, hosting a party at Ed Kane's club The Estate.

Ostensibly, Hilton was in Boston to promote her new movie, "The Hottie & the Nottie," which opens Friday. Asked if she wants to be taken seriously as an actress, Hilton said yes, and mentioned Cameron Diaz as a role model. Hilton said she appeared in numerous school plays, playing the lead in "Romeo and Juliet" and "The Diary of Anne Frank." Anne Frank? "I wore a wig," she said.

Hilton, who finished high school but never attended college, said the role she'd really like is Harvard student. "I love this place," she said. "I think I'm going to apply."

He got game
A 16-year-old Boston Ballet School student is among the seven dancers to win the prestigious Prix de Lausanne ballet competition held over the weekend in Switzerland. Dylan Tedaldi of Newton is one of two US prize winners in the competition, which is open to anyone between the ages of 15 and 18 who is committed to pursuing a professional dancing career. A student at the company's school for eight years, Tedaldi has performed with Boston Ballet and was one of the dancers featured in the movie "The Game Plan."

He'll definitely be back
Actor Ryan Reynolds, who spent yesterday at the Ritz promoting his new romantic comedy "Definitely, Maybe," planned to skip last night's Paris Hilton party. "I'll avoid that circus," he said, telling us he's bound instead for the Berlin Film Festival and the premiere of "Fireflies in the Garden," in which he costars with Julia Roberts, Willem Dafoe, and Emily Watson. Not to worry. Reynolds will be back in Boston soon to start shooting a romantic comedy with Sandra Bullock titled "The Proposal."

Outdoor gig, indoor guy
Keep an eye out for local boy Mike Bortone on tonight's premiere of "Survivor." This season the CBS reality show pits 10 fans of the series against 10 former castaways who're all marooned together on the Rock Islands of Palau, Micronesia. "I've been a loyal viewer forever," said Bortone, an LA-based actor who grew up in Watertown and played football at Northeastern. "As an actor, I was, like, do I want to do this [show]? And I decided [expletive] yeah, I do." So was Bortone prepared to get down and dirty? "I've only been camping once, and it rained so I left," he said. "I am not an outdoor person at all."

Hannah to make splash
Actress and animal rights activist Daryl Hannah will be at the premiere of "Dolphins and Whales: Tribes of the Ocean" at the New England Aquarium on Wednesday. She'll join filmmakers Jean-Jacques and Francois Mantello, and ocean experts Jean-Michel Cousteau and Sylvia Earle for a Q&A.

But can he avoid a pass rush?
Baby Blog has posted the best picture yet of Tom Brady's 5-month-old son. Snapped over the weekend while the pigskin progeny was out for a stroll with his mom, actress Bridget Moynahan, the pic reveals what many of us already suspected: John Moynahan is one cute kid.