The scientists and the stars 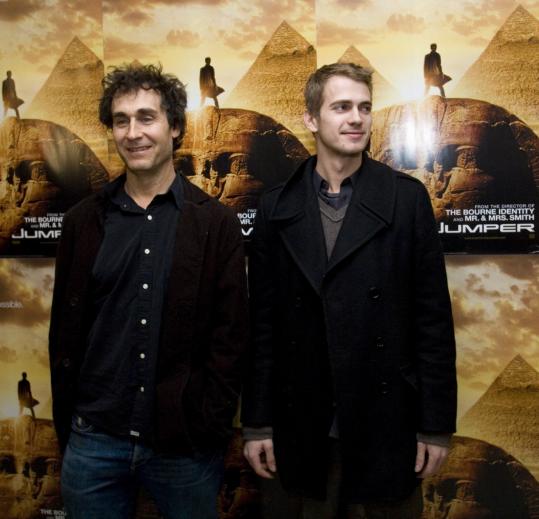 In his new movie, "Jumper," Hayden Christensen plays a man who can teleport himself anywhere in the world. But yesterday the movie star had to opt for more conventional transportation to make it to MIT, where he and "Jumper" director Doug Liman joined physicists Max Tegmark and Edward Farhi to talk about the sci-fi film. "If I could really be anywhere right now, I'd be at home," said Christensen complaining about the cold despite being a native of Canada. Best known for his role in the "Star Wars" prequel pics, Christensen said he's a fan of science fiction. "It's all about the story for me, for sure," the 26-year-old actor said. "But I'm big on the idea that sci-fi is the birthplace of what's coming next." Asked about his costar Rachel Bilson, who happens to be his current girlfriend, Christensen wouldn't bite. "She's really great," he said smiling. "I'm a big fan of hers." If last night's event felt more like a tutorial than a movie premiere, that's because it was. Only a few scenes of the film were shown, with most of the evening devoted to a discussion of the science of teleporting. "Don't forget we're professional scientists," said Farhi. "So when we go to a movie we're not too interested in evaluating the scientific accuracy of it." Liman, who directed Matt Damon in the first "Bourne" film, said he was struck by the honesty of the "Jumper" script. "The ability to teleport, you've seen in a million movies, but here was an 18-year-old kid using it to rob banks that felt just so authentic to me," said Liman. "Jumper," which also costars Diane Lane and Samuel L. Jackson, opens Feb. 14.

A family affair
She didn't win anything, but Jennifer Garner had plenty to celebrate at the National Board of Review awards in Manhattan Tuesday night. Garner's husband, Ben Affleck, won the best directorial debut award for "Gone Baby Gone," and Garner presented her "Juno" costar Ellen Page the award for best breakthrough performance. Other honorees included "Gone Baby Gone" star Amy Ryan, who was named best supporting actress, and her costar Casey Affleck, who won for "The Assassination of Jesse James by the Coward Robert Ford."
'Martha' joins 'Star lineup
When hungry folks stroll into Chris Schlesinger's All Star Sandwich Bar in Cambridge, they'll soon see the "Martha" on the menu. Schlesinger, chef-owner of the Inman Square shop and the nearby East Coast Grill, was on Martha Stewart's daytime show yesterday making treats, including the "Rachel" - a twist on the traditional Reuben - and a lamb sandwich that Stewart dubbed the "Martha." While Schlesinger said he'll add the sandwich to the lineup, don't expect an exact copy to be sold in Cambridge. "[Martha] likes mayo - more mayo than we'd use," Schlesinger told us yesterday. "So we'll go with something else."
Band moves up
As breaks go, this one's big. The Boston-based band Boys Like Girls has been invited to open for Avril Lavigne on her upcoming North American arena tour. "Avril's a fan and everyone associated with her is a fan," Bret Disend, the Newton native who manages Boys Like Girls, told us yesterday. Originally from Andover, BLG has a large following. The band's self-titled debut album has just been certified gold, meaning it's sold more than 500,000 copies. "And a gold record ain't easy these days," said Disend. The tour, which begins in March, includes 46 dates. Accustomed to playing tiny venues, BLG will be performing in several 13,000-seat arenas.
Presidential dollars
Thank goodness for celebrities. If it weren't for the fat checks written by Tinseltown types, the presidential campaigns might be in the poor house. A few celebs, such as Michael Douglas, Barbra Streisand, and Paul Newman, are hedging their bets by donating to as many as three candidates, while others are pledging allegiance to just one. Fran Drescher, for example, the former star of the "The Nanny," contributed $2,300 to Hillary Clinton's campaign, telling the AP that she considers the former first lady "the best man for the job!" Here's a partial list of folks with local ties and who they're helping to fund:"Family Guy" creator Seth MacFarlane: $1,000 to Barack Obama
"Grey's Anatomy" actress Ellen Pompeo: $4,600 to Obama
Actor Leonard Nimoy: $2,300 to Obama
Actor Adam Sandler : $2,100 to Rudy Giuliani
Actress Elisabeth Shue: $1,500 to Chris Dodd
Musician Branford Marsalis: $4,600 to Obama
Actress Mary Steenburgen: $2,300 to John Edwards; $4,600 to Hillary Clinton
Actor Ben Stiller: $2,300 to Edwards; $2,300 to Obama; $4,600 to Clinton
Actor Forest Whitaker: $2,300 to Obama
Writer/Comedian Larry David: $2,300 to Edwards; $2,300 to Obama
Musician Don Henley: $4,600 to Edwards; $4,600 to Clinton
Holding pattern
The writers' strike drags on, but film crews here are this close to launching a couple of big projects. Richard Gere was at the Rhode Island State House yesterday, just days before filming begins on Lasse Hallstrom's "Hachiko: A Dog Story." And in Boston, the Matthew McConaughey and Jennifer Garner flick "The Ghosts of Girlfriends Past" is slated to start rolling in just a couple of weeks. One film that looks like it will be delayed is Martin Scorsese's "Shutter Island," starring Leonardo DiCaprio. While location scouting for Dennis Lehane adaptation continues, word is that Scorsese will wait for the strike to be resolved before he starts filming.
Fighting hunger
Bruins rookie sensation Milan Lucic suffered a broken nose and got a few stitches after an on-ice scrape over the weekend. But that didn't stop him from kicking off Super Hunger Month, a benefit for the Greater Boston Food Bank. Lucic is promoting the 5 for Fighting Hunger Can & Cash Drive at the TD Banknorth Garden. Bruins fans can bring in five food items or donate $5 during tonight's home game against the Toronto Maple Leafs.