JoJo is a girl who thinks she is a winner 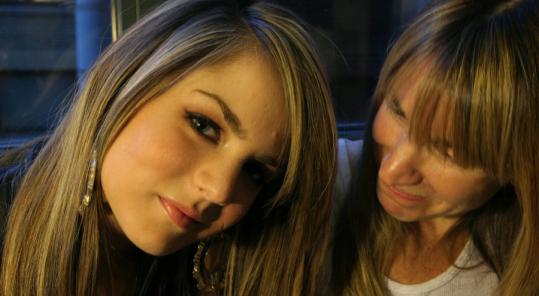 Joanna "JoJo" Levesque is in it to win it. Nominated for a Boston Music Award in the category of National Female Vocalist of the Year, the Foxborough filly's actually lobbying for votes. On her MySpace page, the teen singing sensation invites fans to visit the Boston Music Awards website - bostonmusicawards07.com - and cast a vote for her. "Please help me win!" she writes. JoJo, who's currently shooting a TV movie in Canada with Valerie Bertinelli, will have to beat some well-known artists to win, including Aimee Mann, Amanda Palmer, Deb Talan, Jo Dee Messina, Juliana Hatfield, Lori McKenna, Melissa Ferrick, and Paula Cole.

Producing a party
Word is Nick Paleologos, master of the new and improved Massachusetts Film Office, is planning a big party to celebrate the biggest year of movie production in the state's history. The party, we're told, isn't for muckety-mucks but for the union folks who are actually making the movies. The shindig's precise date and location aren't set yet, but it's looking like early January perhaps at the Teamsters hall in Charlestown. . . . Meanwhile, Hollywood's set to invade the Hub again. In the coming days, "The Box" starring Cameron Diaz will set up shop at the Boston Public Library and in Milton, and "The Lonely Maiden" starring Morgan Freeman, William H. Macy, and Christopher Walken will be filming in the North End and at Murphy's Law in Southie.
The price of fame
Is "The Early Show" correspondent Dave Price really "wherever the action is," as CBS would have you believe? Yesterday, Price broadcast live from the Boston Children's Museum, but it turns out the network had begged local folks to show up and make the museum look lively. We were hit up by the Boston Young Professionals Association, who e-mailed us to say that CBS asked the BYPA "last minute" to get 100 people over to the museum. Hmmm. . . . In town to receive the Excellence Award at the Boston Irish Film Festival, actor Aidan Quinn and crew dined the other night at Grafton Street in Harvard Square.
Making his mark
Mark Wahlberg's not hurting for work. The Dorchester-bred actor (inset) recently wrapped "The Happening" with director M. Night Shyamalan, is now shooting "The Lovely Bones" with director Peter Jackson, and next will star in director John Moore's movie based on the popular video game "Max Payne." Not bad for a former underwear model. . . . Newton native and former Globie Nell Scovell is on the small screen tomorrow. Scovell, who covered school sports for the newspaper, co-wrote and directed "It Was One of Us," a partially Boston-based mystery, which airs tomorrow on Lifetime. No slouch, Scovell's TV credits include writing stints on "The Simpsons," "Monk," and "Murphy Brown," and she created "Sabrina, the Teenage Witch."
Stars shine at Garden
The new-look Celts are understandably a big draw. There were a few familiar faces with tickets to last night's game, including Sox skipper Terry Francona, Pats defensive lineman Vince Wilfork, and behemoth Bruins captain Zdeno Chara. . . . Meanwhile, Wilfork's teammate Tom Brady is spending at least some of his bye week in the Big Apple. People magazine placed the Pats QB at the Rose Bar at the posh Gramercy Park Hotel, where he was one of several celebs, including Bruce Willis's eldest daughter, Rumer, Lenny Kravitz's daughter Zoe, and "Entourage" actor Adrian Grenier. Earlier in the evening, No. 12 dined at the Spotted Pig, where Owen Wilson also ate. The mag made no mention of Brady's Brazilian beauty Gisele Bundchen.
What a rush for Ramone at Berklee
Legendary music producer and Berklee trustee Phil Ramone hosted a special screening yesterday of the movie "August Rush" starring Keri Russell and Jonathan Rhys Meyers. Afterward, the 65-piece Berklee orchestra played a concert of music from the movie.
Energetic support
Folkie Ani DiFranco, who's talking a lot about clean, sustainable energy on her tour, was joined onstage at the Orpheum last night by Democratic presidential wannabe Dennis Kucinich and two-time World Poetry Slam champ Buddy Wakefield.