Who's got 'Fifty Shades' fever? 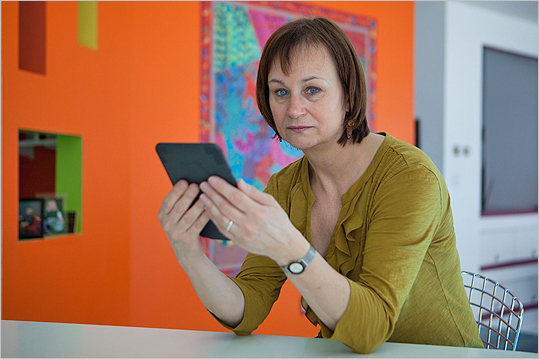 (Kayana Szymczak for the Boston Globe ) Janice Abarbanel, a fan of the book "Fifty Shades of Grey," with her Kindle at her home in Sharon on March 26.
By Beth Teitell Globe Staff / March 29, 2012
Text size – +

The steamy book is called “Fifty Shades of Grey,’’ and many people have never heard of it. But for those who have - boy, do they want to spread the word.

“I told my mahjong group, ‘Oh my god, you have to read it,’ ’’ said Janice Abarbanel, 57, an art-jewelry maker from Sharon.

“It makes you think how you could add more spice to your life,’’ Abarbanel said.

Earlier this month, the book’s author, a former TV executive from Britain, writing under the pseudonym E.L. James, lived out a different kind of fantasy when publisher Vintage Books, part of the Knopf Doubleday Publishing Group, bought the world English-language rights to the series. Then, just days ago, Universal Pictures and Focus Features shelled out a reported $5 million for the hotly contested movie rights to the “Fifty Shades’’ trilogy.

And all that without a word from Oprah, noted Thomas Connolly, a Suffolk University English professor.

“Lately, as soon as people hear it’s viral, it takes on a life of its own,’’ Connolly said. “It has the added fillip of being a woman’s book. Yes, it’s kinky, but it’s for women. The description reminds me of the 19th-century three-decker novels that were serialized in newspapers. They were absolutely dismissed by critics, but that’s what real people, by the hundreds of thousands, were reading.’’

Vintage has already released an online version of the trilogy, and plans to release paperback editions of “Fifty Shades of Grey’’ on April 3, and the final two books on April 17.

The first printing of the entire trilogy will be 750,000, a staggering number in the publishing industry. While no Harry Potter-style midnight sales events are planned, the big day can’t come soon enough for some local readers. Bookstores and the Boston Public Library are reporting a spike in pre-orders and intense interest - which in some cases emerged before staffers themselves had even heard of “Fifty Shades of Grey.’’

“What is this book, and why is everyone asking for it?’’ was the initial reaction of Laura Irmscher, the BPL’s collection development manager. With patron requests growing, the BPL ordered e-books and 10 copies of the paperback - an unusually high number for a book by an unknown author - and plans to order more if the hold list grows too long.

Critics have derided the trilogy’s writing and plot development, and dismissed it as mere “fan fiction.’’ As fans of the “Twilight’’ series know, “Fifty Shades of Grey’’ was initially written as graphic fan fiction inspired by that series, with the Christian and Ana characters reminiscent in some ways of Edward Cullen and Bella Swan.

A typical (albeit G-rated) passage, in which the young and innocent Anastasia Steele describes an early encounter with brooding 20-something Christian Grey reads: “My heart is pounding a frantic tattoo, and for some reason I’m blushing furiously under his steady scrutiny. . . . He’s not merely good-looking - he’s the epitome of male beauty, breathtaking, and he’s here.’’

Literature? Surely not. But readers don’t seem to care. The book has soared to the top of digital bestseller lists, and local booksellers report that a surprising number of people request -or recommend it - it without even knowing what the book is about.

“People just say that whoever told them about it says they can’t put it down,’’ said Lorna Ruby, a book buyer at Wellesley Books.

“In most cases, the person who’s telling the person doesn’t actually point out that it’s erotica. They leave that part out. I don’t know why. We’ve had to tell people, ‘You do know that it’s about a young billionaire who seduces a college student and there’s a tie on the cover because he ties her up with a tie?’ ’’

When Stephanie Reinertsen, 31, a lawyer from Charlestown, suggested the book to colleagues, she had no idea it was so “provocative,’’ she said, cringing at the memory.

“My sister and her friends are obsessed with it,’’ she said, “so I actually recommended it to a couple of co-workers before I’d read it.’’

Reinertsen isn’t the only one feeling a little sheepish about the racy sexual content. At Porter Square Books in Cambridge, one customer pre-ordered it not for herself but “for a roommate,’’ reported buyer Jane Jacobs.

The store has ordered 18 copies of “Fifty Shades of Grey,’’ with half of those already pre-sold. “I don’t anticipate they will last all that long,’’ Jacobs said, “even in the academic confines of Cambridge.’’

The forthcoming Vintage paperback will cost $15.95 (and e-books are $9.99), but an earlier edition, by the small Australian publishing house, cost $29.99. That’s a lot for a book by a writer no one’s ever heard of, said Peter Sherman, store manager at Barnes & Noble in Worcester.

Asked to sum up the buyers’ hunger, Sherman answered in a single word: “Gimme.’’

As word of mouth grows, some readers report downloading or pre-ordering the book simply because others have - and they don’t want to miss out on the phenomenon.

“They’re saying all the women are trying it,’’ said Dina Papantoniou, 42, a loan officer from Everett, by way of explaining her e-book purchase.

In Belmont, Benita Gold recommended her book group read it after hearing about it on television.

“I’m the one at every meeting trying to steer the conversation to sex, so it’s a natural,’’ Gold said. The club generally reads more traditional best-selling selections, like “Cutting for Stone’’ and “The Glass Castle,’’ but as Gold explained, “everyone keeps saying the books are too depressing.

“At least ‘Fifty Shades of Grey’ will lead to a feisty discussion.’’ 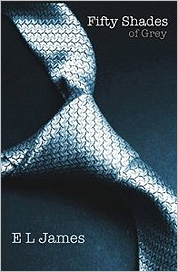 Excerpts from
‘Fifty Shades’
‘He’s staring at me, gray eyes dark, and as usual, I have no idea what he’s thinking. He hides his thoughts and feelings so well. “How did I get here?” My voice is small, contrite.’
‘I glance up at him. He looks so cool and calm, like he’s been doing the Seattle Times crossword. How unfair. Is he totally unaffected by my presence?’
‘I flush and stare down at my hands. That’s what I’m hindered by in this game of seduction. He’s the only one who knows and understands the rules.’