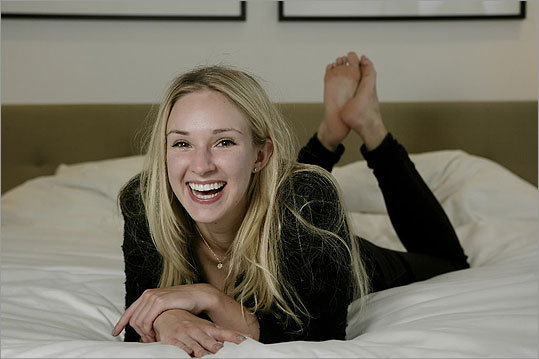 NEW YORK - Sophie Flack looks nervous when you ask her what she does for a living. She admits that she hasn’t figured out a graceful way to answer the question.

“I usually say that I danced,’’ Flack, 28, says, her brow furrowed as she relaxes in the living room of her New York apartment. “I say I danced . . . and that I have a novel coming out. A novel that’s based on my experience. And I say that I’m a student.’’

She sits cross-legged, looking too flexible to be someone who studies and writes all day.

To be fair, Flack’s career path requires more than a one-sentence description. She was raised in Watertown and enrolled at Boston Ballet School when she was 7. By 11 she had fallen in love with the Balanchine method and enrolled at the Massachusetts Youth Ballet. At 15, when she was accepted at the School of American Ballet, she moved without her family - but with their blessing - to New York. She eventually joined the New York City Ballet, where she danced for nine years before being laid off from the corps de ballet in 2009. It was devastating. In July of that year Flack told The New York Times, “You’re just erased, as if you were never there. It was the end of the life I knew since I was a little girl.’’

Fortuitously Elizabeth Bewley, an editor at Poppy, an imprint of Little, Brown Books for Young Readers, saw the Times article and imagined that Flack had a great story to tell. Bewley suggested that she write a young adult novel loosely based on her experiences, and Flack, who needed a distraction - and was enrolled part time at Columbia University - accepted the challenge.

“The opportunity fell into my lap and I grabbed it,’’ Flack says.

Two years later, Flack’s book is on bookstore shelves. Coming out this week, “Bunheads’’ (a nickname for ballet dancers) tells the story of Hannah, a Massachusetts-bred dancer who is desperate to be a soloist with the Manhattan Ballet. The novel follows its heroine as she tries, somewhat unsuccessfully, to balance her demanding career with her flagging personal life. She copes with competition among friends and longs to be a normal 19-year-old. She panics about weight gain and worries that she will never be more than just a dancer in the corps. Hannah knows that no matter how talented she is, her ballet career will be brief.

The tale sounds like it could be Flack’s own story, but the author says “Bunheads’’ is fiction. Unlike Hannah, Flack was never a one-track bunhead. She was satisfied dancing in the corps. She had friends outside of the ballet world and a list of hobbies. Flack has always considered herself to be a visual artist as well as a performer, and is known among friends and family for her creations. Flack’s mother, artist Fran Forman, is a resident scholar at the Women’s Studies Research Center at Brandeis.

“She made me a decoupage frame. She made me a box that’s shaped like a star. Just a very, very stunning child. I had no idea she could write, too,’’ Cronsberg said, laughing.

Flack’s editor says she was thrilled to discover Flack’s outside interests also included writing. When Bewley first contacted Flack, she had no idea whether the dancer would - or could - write a novel, but it turned out that Flack had documented her dance life in journals. Flack describes the diaries as snippets from her ballet past, everything from details about the boys she liked to anecdotes about performances.

“Real writers are the ones who are writing all of the time,’’ Bewley said. “She’s been writing in those journals for years.’’

Bewley said Flack’s discipline as a dancer made the writing process easier. She obeyed deadlines. She was meticulous. “She has an awesome work ethic.’’

Still, there was a learning curve. Flack calls the writing process “humbling’’ and said she wound up having to cut massive chunks of description so that the story moved faster. Her attention to detail made the rewrites overwhelming at times.

It didn’t help that she was combing through her past to write the book at the same time that she was processing her loss of the ballet world.

Flack looks composed when she talks about dance and seems comfortable referring to that life in the past tense, but she admits it’s been a struggle. Sometimes, traditional ballet music is painful for her to hear. And her dancer’s brain has not entirely turned off. “I have anxiety dreams where I miss my entrance,’’ she said.

Flack has thrown herself into student life at Columbia, where she’s a junior. She’s reading Shakespeare and Israeli literature and lights up when she talks about fulfilling her math requirement.

“I think school has changed me in a really positive way,’’ she said. “My eyes are more open to the world.’’

Flack adds that it’s helped to have constant support from her parents, her sister, Hannah, (for whom the novel’s main character is named), friends, and her longtime boyfriend, actor Josh Charles, of “Dead Poets Society’’ and “The Good Wife’’ fame. Charles knew her before she left the corps and understood what she was mourning as she wrote the book.

“We - we had to go through it,’’ Flack said thoughtfully.

Now Charles, whom Flack used to bring backstage at the ballet, reads her drafts and likes to share his opinions about her symbolism and dialogue. The couple keeps an impressive bookshelf with their favorite titles in their Union Square loft. Flack likes Mary Shelley, romantic poetry, and Shakespeare, while Charles’s books include Tom Drury’s “The End of Vandalism’’ and Thomas Friedman’s “From Beirut to Jerusalem.’’ On the very top shelf is a collection of young adult novels, including Tonya Hurley’s “ghostgirl,’’ and novels from the “Clique’’ and “Poseur’’ series.

Flack says that shelf was homework. Bewley asked her to read the books so that she understood the tone of young adult novels.

“I didn’t want to talk down to the reader,’’ Flack said about one of her greatest writing challenges.

This week, the new author will have her first reading and signing, and her first book party. She plans to visit Boston for readings early next year.

The book has already been optioned for television and Flack is waiting on news. And, of course, she has new projects in mind. She won’t disclose details, but hints that it could be about ballet.

“I definitely have an idea,’’ Flack said, grinning. “I don’t think I’m done with this world.’’