You and coauthor Caryl Rivers subtitled your book Challenging Toxic Stereotypes About Our Children. What are some stereotypes?

That there are big differences in cognitive ability – girls are better at verbal and boys are better at math. That’s gotten to be conventional wisdom, and the consequences are very dramatic. It creates a negative spiral. Boys themselves start saying, “I can’t handle Tom Sawyer; give me ‘Captain America.’ ”

Are there any true gender-related learning differences?

There are, but they’re trivial and no reason for same-sex education. Even if there were tremendous differences, why would we argue for homogenous classrooms when in every other case we want heterogeneity?

How do these beliefs influence parents?

Parents want the best for their kids. If people with fancy initials after their names tell them Johnny’s not a natural reader, [that] he’s going to be athletic, they’re going to spend their time with him doing sports. But the brain is not like other organs. It’s enormously influenced by the environment. So if you do more reading, it’s going to become better at that.

Who likes the idea of innate differences?

Marketers. We did an informal analysis looking at toy catalogs, and you would be flabbergasted at what’s sold to girls. They’re more than half of all graduates of college, and it’s fantasy dress-up, kitchen toys, dolls – and not dolls that drive creativity. For boys, the word is “action figures,” dolls that move every which way. Boys are learning scientific notions, but the girl’s doll can move only one way – to hold a baby.

What can parents do?

You have to stand back and say: “Why am I choosing this toy for Johnny?” “Why aren’t I taking Susie to the science museum?” Demystify the word “math” – start counting pennies. Put a seed in a pot and grow it, and that’s science.

What gives you hope?

There’s a teacher in New York who offers a forensic science class; it’s the most popular class. What percentage do you think are girls?

Eighty percent. And they’re wildly enthusiastic. He’ll say, “Who wants to collect the putrid chicken flesh today?” and they’re running to the door. 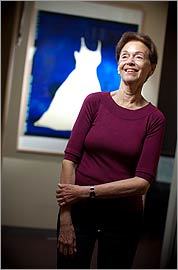