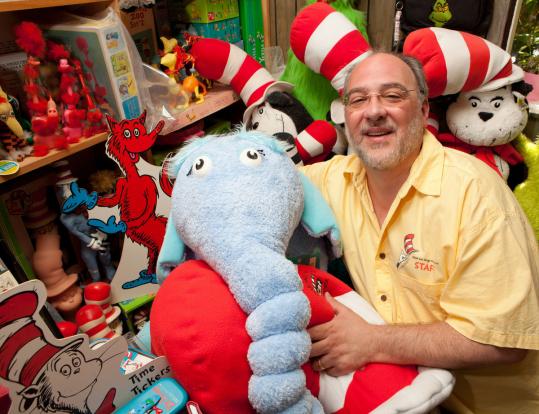 Charles Cohen, surrounded by Dr. Seuss collectibles in his South Deerfield home, brought attention to magazine stories the author had written in the 1950s. (Matthew Cavanaugh for The Boston Globe)
By Abram Brown Globe Correspondent / August 27, 2011

Down in the basement of his small South Deerfield home, Charles Cohen, a world-class Dr. Seuss expert, keeps some old copies of Redbook magazine. They are in a white box, browned and flaking, but still protected by a plastic cover. Nearby shelves hold purple and blue plaster casts of teeth: dental molds. Cohen still practices dentistry from his house, an occupation that pays for his avocation.

He stacks the magazines on his dining room table and explains that each contains an original Dr. Seuss story, written in 1950 or 1951. The tales, he says, are almost completely unknown to today’s readers.

That’s about to change. In September, Random House will publish the seven little known stories in “The Bippolo Seed and Other Lost Stories.’’ While Theodor Seuss Geisel, who was born in 1904 in Springfield and died in 1991, authored the yarns, they might never have been seen again if not for Cohen, who wrote an introduction for the book, and first developed the project about five years ago.

“These stories are like buried treasure,’’ he says, flipping through several pages of a Redbook magazine that contained a story about a goldfish named Gustav, who grows and grows. “Maybe not the same value as treasure - well, actually, maybe they do have the same value.’’

The project began after Cohen collected the Redbook magazines off . A heavyset man with a gray beard and a jovial, smiling manner, Cohen enlarged each Seuss cartoon on the office copy machine. He then pasted each image to a piece of white paper, and added the story text to the page, but not as it had appeared in the magazine. He laid it out with considerably more white space, as Seuss did in several collections that included old magazine stories.

The Redbook tales range in subjects. In one, a boy, Tadd, grows tired of the similarities he shares with his twin, Todd. Then there’s Gustav the Goldfish, who grows out of control. And in another, a duck and a cat find a bippolo seed, which will grow into a tree that grants every wish.

The stories are in the classic Dr. Seuss style, said Phil Nel, another Seuss expert and English professor at Kansas State University. And the illustrations are especially familiar: the cat from “The Bippolo Seed’’ bares a striking resemblance - mostly in his face - to the feline in “The Cat in the Hat.’’ Nel also points to the expert wordplay and use of rhyming couplets. But, in the grand scheme of Seuss, these are minor works, Nel said.

“But it’s like minor works by Virginia Woolf or Shakespeare or Jane Austen. They may be minor, but they’re the minor works of a genius,’’ Nel said.

In order to bring these stories to a fresh audience, Cohen first needed to prove his own credibility. Almost a decade ago, Random House, Seuss’s former publisher, sent a team to Cohen’s house. When he showed them Seuss toys they had never seen, they were swayed, he said. In 2004, he wrote a biography published by Random House, “The Seuss, The Whole Seuss, and Nothing But the Seuss,’’ and then put together anniversary editions of “Yertle the Turtle and Other Stories’’ and “How The Grinch Stole Christmas.’’

With these books complete, he pitched Random House an idea: release a collection of the lost Redbook stories. Random House agreed, but wanted Cohen to have some help. Cathy Goldsmith, who is now Random House’s associate publisher, worked with Geisel on four books, helping to select colors for the illustrations. She took over the art direction for this new collection, and her main task was to fully colorize the images. In the magazines, they appeared as two-color prints.

In all, Geisel published around 30 works in Redbook. That’s enough for Cohen to put together another volume, a prospect that excites him. Sometimes, though, he wonders what will happen to his collection of Seuss items and research after he’s gone, since he has no children. While there are countless numbers of Shakespeare experts, for example, there are only a handful of Seuss scholars - even though there just may be more people who would recognize a Seuss poem more quickly than a play by the Bard.

“Well, I guess it’s all up to me,’’ Cohen said. Standing next to him, on the second-floor landing above his dental office, was a 3-foot statue of a smiling Sneetch.

Abram Brown can be reached at abrambrown508@gmail.com.


Theodor Seuss Geisel, or Dr. Seuss, often returned to the same motifs, images, and narratives throughout his writings. For example, 11 years before he wrote “Horton Hatches the Egg,’’ a book about an elephant who cares for an egg while its mother vacations in Palm Beach, he drew a cartoon for Life magazine about an obliging dachshund that hatches eggs for storks. Seuss’s affinity for recycling ideas allows readers to find older Seuss works that mirror his classics. Nearly every tale in the forthcoming “The Bippolo Seed and Other Lost Stories’’ (Random House) can find an earlier counterpart, said Seuss expert Charles Cohen, who edited the collection and wrote the book’s introduction. “This stuff would get stuck in the back of his brain, and it would just pop up again,’’ he said.

Both feature: An anti-materialism message

Both feature: Events that spiral out of control

Both feature: Visions about the future