Salem seen in a new light

Recalling days of fame and infamy 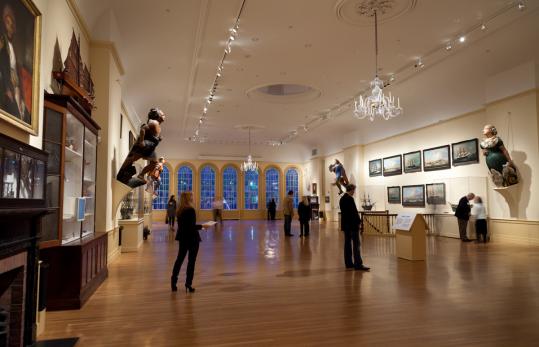 Visitors to Salem who venture out to Chestnut Street and walk the few blocks of its Federalist mansions may be filled with a different sense of the city, one beyond its reputation as the witch capital of early America. Instead one is left with the sense of faded grandeur, that there was once an “empire’’ here, one that time has passed by.

As Robert Booth relates in his new book, Salem was indeed, an “empire,’’ commercial more than political, and extraordinary for its brief lifespan of some 40 years from the late 1700s to roughly 1830. Around the turn of the 19th century, he writes, Salem with its 9,500 residents “was by far the richest place, per-capita, in the United States.’’

A complex and well-researched yarn, “Death of an Empire’’ chronicles the little-known history of this relatively brief period of wealth and good fortune for a Massachusetts seafaring center, along with its economic downfall amid the rise of industrialization in the United States. It also recounts a lethal conspiracy and scandal that robbed Salem of whatever remaining luster was left after the city’s golden age.

Booth, a local historian - and sometime lobsterman - grew up in Marblehead and knows the territory of which he writes with authority.

Barely a hundred years after the witch trials of 1692, Salem merchant E. Hasket Derby had a fleet of ships whose Yankee captains “roamed at will’’ in the East Indies, “opening new markets . . . [and] loading rich cargoes of indigo, sugar, pepper, spices, and coffee.’’ And “[that] wealth transformed the old colonial town into a beautiful world capital . . . [with] an extended waterfront of wharves, warehouses, and tall-masted ships.’’

There were hazards at sea, and ships that sailed out of Salem’s harbor never to return. And there was terrible loss of life, from pirate attacks and tropical diseases. But as Booth writes, the maritime economy “raised up all classes.’’

Among the ship owners who followed in Derby’s wake was Stephen White, who had his own fleet and became a force in the state’s Republican politics. His monument is the East India Marine Hall, built in 1825 as the meeting place for the city’s merchant princes, now the cornerstone of the Peabody Essex Museum.

There were brief periods when Salem’s merchant fleets were idled, during the Embargo of 1807 and the War of 1812. But just as Salem’s economy was reviving, it ended abruptly in the later 1820s, suffering twin blows from “the long shadow’’ of Lowell’s developing textile mills, with its promise of greater fortunes, and from the growth of Boston as the leading New England seaport.

Salem’s leading merchants, including White, followed the action to Boston. And when the mathematician-navigator Nathaniel Bowditch was lured away to run a Boston insurance company, writes Booth, “the very essence of Salem’s greatness was gone.’’

The period of “empire’’ was over, and “Death of an Empire’’ could have ended here, and stood as an absorbing account of a forgotten era in New England’s social and economic history.

But all the while, there had been looming a darker side to the Salem story, which Booth finds not only in the tales which Nathaniel Hawthorne was starting to write, but personified in the activities of Dick Crowninshield.

Crowninshield, scion of an old respected family, made crime both “a business and a threat to the community,’’ guaranteeing good times for a gang of followers with “military-style raids’’ which included sending teams of pickpockets to victimize the cheering crowds along the route of General Lafayette’s triumphal tour in 1825 through Marblehead and Salem.

The two worlds, the imperial Salem of Stephen White and the underworld of Dick Crowninshield, came together in 1830 in the bankruptcy of Joseph Knapp, an elderly merchant captain whose largest creditor was White’s father, a contemporary of Knapp.

That triggered the murder, alluded to in Booth’s subtitle, involving not only Crowninshield as a plotter, but Knapp’s sea captain sons who, their maritime fortunes lost, thought they could save the family from ruin by killing their father’s creditor.

This very scandal, Booth theorizes, explains why the golden heyday of Salem was allowed to become largely forgotten in the annals of local history. It was, Booth writes, a kind of “cover-up.’’ The residents of Salem “repressed the memory of their empire’s sordid demise, a trauma involving murder, executions, and disgrace.’’ And, he writes, “[t]heir conspiracy succeeded,’’ leaving modern Salem with “no memory of the Whites and their many achievements’’ and the witchcraft episode of 1692 at the heart of the city’s sense of itself and its reputation in the wider world.

Michael Kenney, a Cambridge-based freelance writer who has written extensively about Massachusetts history, can be reached at mkenney777@comcast.net.

DEATH OF AN EMPIRE:

The Rise and Murderous Fall of Salem, America’s Richest City