Love among the volumes

The Boston Public Library’s historic McKim Building has become a hot spot for weddings, a trend that yields happy couples — and badly needed income for the institution. 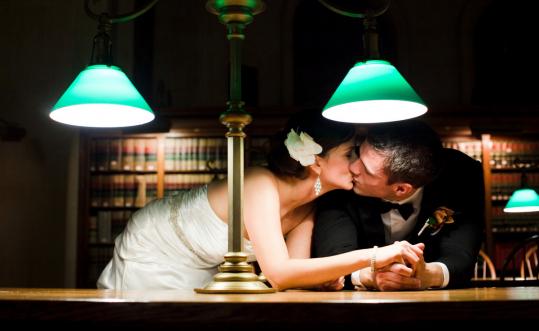 In choosing her to-die-for wedding venue, Joanna Howarth of Arlington drew inspiration from the movie “Sex and the City,’’ which features a wedding scene at the New York Public Library. Stacy Greene of Boston based her decision on her deep love of books.

Neither wanted a conventional hotel wedding if a more unusual space was available. One that offered, for starters, grand architecture, breathtaking interiors, a flowering courtyard, photo backdrops fit for a royal couple, and a downtown setting second to none.

If the Boston Public Library comes to mind, congratulations. You just caught the bridal bouquet, a souvenir being tossed with increasing frequency these days around the marbled staircases of the library’s historic McKim Building.

Not only has the library become one of the Hub’s hottest wedding sites, but in rebranding itself as a “destination’’ venue - for all sorts of private events - it’s also pulling in some badly needed cash.

Over the past three years, budgets have been frozen or trimmed and staff positions reduced. Sunday closings, scheduled to take effect this fall, were canceled by the library board just last week. Every revenue source helps, and hosting weddings is proving to be a fine romance between institutional cachet and economic opportunity.

“It feels like you’re being married in a fairy tale,’’ says Howarth, who married her husband, Dean, last September before 160 guests in the library’s courtyard, which features an arcaded promenade, a fountain, and a bronze cast statue. “It’s a dream location, an oasis in the middle of a bustling city.’’

While the library’s Copley Square branch has hosted weddings for at least a decade, business is now officially booming. From two dozen weddings in fiscal year 2010, bookings soared to 54 in fiscal 2011. During prime wedding season, May through October, two or more weddings per weekend has become routine, according to library officials.

Current bookings extend into 2013, despite virtually no marketing on the BPL’s part. Bridal magazines and word of mouth - seriously, you can get married at the public library? - are doing that job quite nicely. For free.

“This is one of the most architecturally distinctive buildings in the world, so why not use it?’’ says Amy Ryan, BPL president. Ryan acknowledges that the library has needed to become more entrepreneurial in tough economic times, having eliminated 90 staff positions over the past two years to cut costs.

Cutting costs is rarely a concern, though, when choosing to wed at the BPL. Based on four-hour occupancy, room rental fees run from $4,200 for the Popular Reading Room (where most sit-down dinners are held), to $14,700 for the entire second floor of McKim, including Bates Hall, the cavernous room with the elegant, barrel-arched ceiling and busts of famous authors and Bostonians.

Smaller spaces like the Courtyard Restaurant and Map Room are also available, for more modest fees, and are typically used for cocktail receptions and after-dinner dancing.

Add on food, beverage, and equipment rental costs of $165 to $300 per person - charged by The Catered Affair, which holds an exclusive catering contract with the library and operates an onsite kitchen and planning office - and the final tab, even before the band gets its check, can run well into the high five figures. According to the website theknot.com, the average wedding and reception cost is now about $28,000. Another website, CostofWedding.com, estimates that Boston couples spend between $22,000 and $36,700.

Significant as they are, wedding revenues are not having a game-changing impact on library operations, say BPL officials, who recently approved a $39.7 million budget for the coming fiscal year to operate the main Copley library and 26 neighborhood branches.

Weddings and other special events brought in $825,000 last year but netted only $220,000 after expenses that include providing extra custodians and security onsite, utility costs, and salaries for the events office. Still, that additional revenue bought new check-out machines and helped fund the new computer center.

In the meantime, the Copley Square branch has begun rearranging its space in ways that have raised questions in some quarters about its priorities. Among the changes underway are relocating the Leventhal Map Room from the Johnson Building, the more contemporary half of the library that opened in 1972, to McKim, which opened in 1895; consolidating all publicly accessible library computers in a newly created Tech Center; establishing a group-study area upstairs in McKim; and weeding out thousands of volumes in the Johnson stacks, reducing an inventory of 1 million books to about 700,000.

According to Michael Colford, director of library services, the books being removed are dirty and damaged, outdated reference texts, volumes that haven’t circulated for a year or more, or duplicate copies of once-popular novels no longer in high demand.

Colford calls the pruning process long overdue. With little room for new acquisitions, he says, “We’ve been playing catch-up for years and badly need the space.’’

Even so, some library patrons have questioned whether the BPL’s expanding special events business and reorganization of public spaces is merely coincidental with its booming wedding business - or is a revenue-seeking departure from its core mission of serving the reading public, not tuxedoed wedding guests.

“I’ve been asked about emptying out McKim for weddings, and that’s so far from the truth,’’ says Ryan, maintaining that with rare exception, no wedding or corporate party has been held during normal operating hours. Rather, only after the library’s 5 p.m. close do party planners race to set up for weddings, normally timed to begin at 6:30.

“Our highest commitment is to how we serve the public,’’ Ryan contends. “But we’re also trying to use space in a thoughtful, customer-driven manner.’’

Until recently, weddings were almost an afterthought, according to Jeffrey Rudman, library board chairman. Beginning in the 1990s, Diddy Cullinane, then trustee, opened the BPL to catered parties, but not many, he recalls. Most board members were wary of going too far down that road.

“The library’s basic model resembled that of a monastery,’’ says Rudman. “We had books, and we had silence.’’ By 2004, though, a differently composed board began considering ways to make the library “more of a destination,’’ he says. “We were looking for alternative ways to make money, frankly. And few buildings in this city are more beautiful than McKim.’’

In 2008, a contract was negotiated with The Catered Affair - which also runs the library’s Courtyard Restaurant - allowing it to cater special events. In return, the BPL gets a 12.5 percent commission from the caterer on food and beverage sales for library events. The board also imposed a number of restrictions on wedding parties. Among them: no balloons, candles, or fog machines; no political activity or campaign fund-raising; and, no duct tape or decorative, pitch-producing flora (e.g. Christmas trees) that might leave marks on floors or walls.

Tents cannot be pitched in the courtyard, either, no matter the weather. Nor, as one wedding party recently requested, can a plexiglass dance floor be laid over the fountain pool.

(If you want candles, balloons, or beer pong at your reception, however, sorry, look elsewhere.)

What may be implemented soon are higher rental fees. After all, families willing to play for a library wedding - “not for the faint of heart,’’ as one recent bride put it - could well be willing to write an even larger check, particularly if it aided the cash-strapped BPL. At the New York Public Library, it costs anywhere from $20,000 to more than $50,000 to rent out space.

“But we have to be very cautious about pricing ourselves for the benefit of plutocrats,’’ says Rudman. At heart, he adds, the BPL is a democratic-minded institution, not one in the business of promoting what he calls “recreation for rich people.’’

It is, in short, still a library. Which means that while guests won’t be asked to whisper, certain standards must be kept. At Stacey Greene’s wedding in June, she and her husband, Bradley, threw an after-hours courtyard party featuring ping-pong and beanbag tossing. Those were acceptable, but their request to play beer pong in the picturesque courtyard was denied. Howarth requested a Coldplay song for her wedding processional.

Melissa Alexander Lee, married at the BPL in July, staged a toast with her new husband, Reese, on the courtyard balcony - an idea stolen, she jokes, by England’s Prince William and his wife, Catherine, for their nuptials this spring.

Like many BPL brides, Lynn Haggis, who exchanged vows with Stephen Markowitz in the McKim courtyard last weekend, could hardly imagine a more enchanted place to say, I do. “I’m a scientist, he’s a dentist,’’ she said last week from their honeymoon on Cape Cod. “We’re both slightly nerdy. So the library was the perfect place for us.’’

Couple weds at the BPL