For singer-songwriter turned novelist, a cure for writer’s block 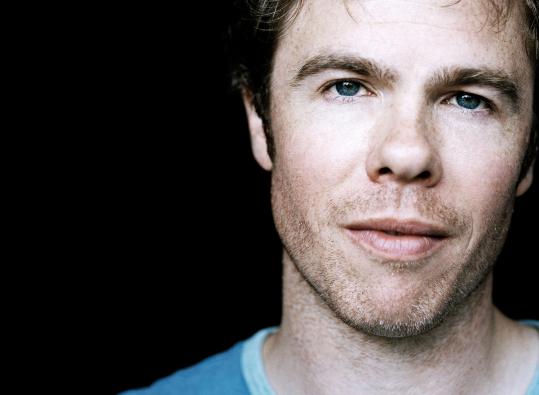 Josh Ritter says when he hits a writing slump he takes on an in-depth reading project.
By Amy Sutherland Globe Correspondent / July 3, 2011

When acclaimed singer-songwriter Josh Ritter, 34, found that he couldn’t get all the material he wanted into a particular song, he turned it into a novel, his newly published post-World War I story “Bright’s Passage.’’ Thus the Idaho-born musician is on a double tour, one with his band, the other for his book. Ritter, who once called Somerville home, read at Coolidge Corner Theatre to a sold-out crowd this past Wednesday.

BOOKS: What kind of books do you like to read?

RITTER: I tend to go in all sorts of different directions. I love a lot of history. Barbara Tuchman’s “The Proud Tower’’ is amazing as is “A Distant Mirror’’ and “The Guns of August.’’ Right now I’m just finishing Neal Stephenson’s “Quicksilver,’’ a historical novel. I’m just starting “American Gods’’ by Neil Gaiman.

BOOKS: Do you prefer big books?

RITTER: Maybe my eye on the shelf goes to them because the spines are larger. I once asked Robert Pinsky, who I’ve become friends with, how he dealt with writer’s block when I had a ton. His advice was to have a reading project when you go into downtime, like time off the road. Rather than fill that empty space with writing or thinking great thoughts, fill it with reading and fit the poems in, he told me. Use your time to fill your brain instead of just cleaning it out.

BOOKS: Are these reading projects like a course syllabus?

RITTER: I do follow a kind of course idea, especially when it comes to someone like Shakespeare. You can read it and also read the history around it. You can read about the theory of it and the language. You can make that your entire world.

BOOKS: Who else have you done this with?

RITTER: I really went full throttle at novelist Pete Dexter, whom I love. Stephen King, I’ve read everything he’s put out. Muriel Spark is another one I read everything. She’s like the Scottish Flannery O’Connor. She loves her characters, but she’s not afraid to kill them off. My favorite is “Loitering with Intent.’’

BOOKS: Did you start reading her when you were in Scotland early in your career?

RITTER: Yeah. Right around that time I read her first book “The Comforters.’’ Maybe my manager gave it to me. Then six to seven years later I started to read her pretty obsessively.

BOOKS: Any other writers you discovered then?

RITTER: J.P. Donleavy, especially, “The Ginger Man,’’ Flann O’Brien’s “At Swim-Two-Birds.’’ Those are two that made a big impression on me. I think so much goes back to Yeats. I always thought it was cool that Ezra Pound, who’s from Idaho, where I’m from, was Yeats’s secretary. He called him Bill Yeats, which I thought was very American and very Ezra Pound-y.

BOOKS: When did you get into reading?

RITTER: That was really, really early. My parents insisted that I read stuff that was a little bit beyond my grasp. I remember my dad reading Stephen Jay Gould to me and my brother, probably because he wanted us to fall asleep.

BOOKS: Do you read a lot on the road?

RITTER: Yes, especially after a show. It takes a while to calm down and then you get in your bunk, pull the curtain and read. It really helps.

BOOKS: How do you find books?

RITTER: The best ones you find by chance. My favorite is when I travel I find that a lot of hotels have lounges stocked with books that no one reads. I’ll just steal them. I’ll take bags of them because I think it’s a shame. That’s how I ended up with all kinds, like books by Judith Krantz or William Least Heat-Moon or whatever. Any Tom Robbins I have I got from stealing from a hotel.

BOOKS: You’re like the savior of unread hotel books.