A celebration of Modernism 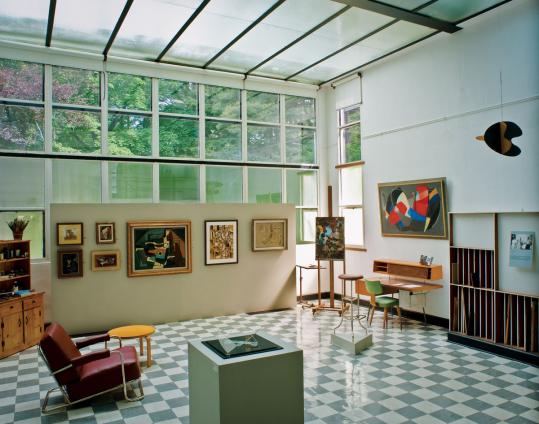 “People think of Boston as a very traditional city, but it was a hotbed of Modernism from the 1930s through the early 1970s,’’ says David Fixler, president of DOCOMOMO US/New England, a branch of the Paris-based group that champions and conserves modern architecture. “All of the great leaders in Modern architecture did work in New England.’’

While many of those homes no longer exist, bulldozed in favor of newer residences, their value has been recognized in recent years and several remain. A new book, “Tomorrow’s Houses’’ (Rizzoli, 2011) — photographs by Geoffrey Gross and words by Alexander Gorlin — pays homage to the Modern architectural gems that remain throughout New England.

Modernism originated in Europe and architects guided by the movement’s principles began designing buildings in New England in the early 1930s. But it wasn’t until Walter Gropius, a founder of the German Bauhaus, a union of free-thinking artists, designers, and craftsmen, arrived to teach at the Harvard Graduate School of Design in 1937, that Modernism really took hold here. By the end of the decade, a consortium of Modern architects including Marcel Breuer, Mies van der Rohe, Philip Johnson, and Frank Lloyd Wright were doing work in New England.

“The influx was spawned by the dawn of the Information Age, and the design schools at Harvard and MIT attracted some of the best architects in the world,’’ says Fixler. “At the time, people were looking to abandon the weight and decoration of traditional architecture. Modernism was about creating spaces where people would feel efficient, clean, and uplifted.

“There was an emphasis on affordability and sustainability, and dwellings incorporated mass produced and industrial materials like steel.

Regional preservation groups, like Historic New England, which operates the Gropius House in Lincoln, have helped renew public interest in Modernist architecture. The fervor for sustainability and environmental responsibility has also sparked enthusiasm for mid-century works.

“The Modernists fit their designs into the existing topography, they kept all the old trees — they weren’t bulldozing entire hillsides to create subdivisions,’’ says Sally Zimmerman, manager of historic preservation services at Historic New England. “Every attempt was made to use the contours of the land to enhance the beauty of the houses.’’

The majority of New England’s Modernist residences are privately owned, but some are open to the public.

Considered the supreme Modernist residence in New England, this fascinating glass box affixed to a brick base was designed by Philip Johnson, who lived in the house for nearly 60 years. A true study in the ability to commune with nature, the structure features an open loft-like space containing the kitchen, dining, and living areas. The sleeping area is shielded by the only enclosure: a massive brick cylinder that contains the fireplace and bathroom. The rambling estate includes 13 additional structures designed by Johnson, including a brick guest house where the architect slept when the exposure became too much.

In 1930, painter George Morris built a studio in the Berkshires based on one in Paris designed by Modernist master Le Corbusier. The studio, made up of white rectilinear volumes, translucent skylights, and gridded windows is considered the first Modern structure in New England. A decade later Morris married artist Suzy Frelinghuysen and they built a two-story stucco and glass block house to accompany the studio, designed by Boston architect George Sanderson.

The house, with its industrial fittings and Art Deco furnishings, contains murals and frescoes created by the couple, as well as their more famous contemporaries including Picasso.

Soon after he began his tenure at Harvard, Walter Gropius was offered land in Lincoln where he designed his personal residence. Set amid an apple orchard not far from Thoreau’s Walden Pond, Gropius chose natural wood clapboard siding and a native fieldstone foundation to align with the New England landscape. Yet the hallmarks of Modernism abound: the boxy white structure, patterned with ribbon windows, has a flat roof and features industrial materials such as acoustic plaster and fixtures ordered from commercial catalogs. Visitors today will encounter the original furniture — much of it handmade in Bauhaus workshops — along with Gropius’s dishes, books, and correspondence.

A late work by Frank Lloyd Wright, this low-to-the-ground, red-tile-roofed Usonian house was built in 1950; neighbors referred to it as a “chicken coop.’’ The home’s spaciousness is not apparent from the public approach, but its backside faces an expansive landscape that seems to float into the home through plate-glass windows intended to blur the barrier between the indoors and outside. The tightly designed 1,600-square-foot brick house contains numerous built-in cabinets and shelves, elegant geometric furnishings, table linens, and vast gardens all designed by Wright.

After World War II, Modernists began experimenting with their designs on Cape Cod. Among the collection is this house, sited in a sparse forest within the National Seashore overlooking a serene pond and designed by prolific architect Charles Zehnder in 1970. The structure combines wood with concrete and glass; exterior materials such as clapboards are used indoors. Long cantilevered decks and an overhanging roof project the living space into the landscape. Recently restored by the Cape Cod Modern House Trust, the house contains its original fixtures and Modernist furnishings by Bertoia, Saarinen, and Bellini.

Jaci Conry can be reached at jaci@jaciconry.com.