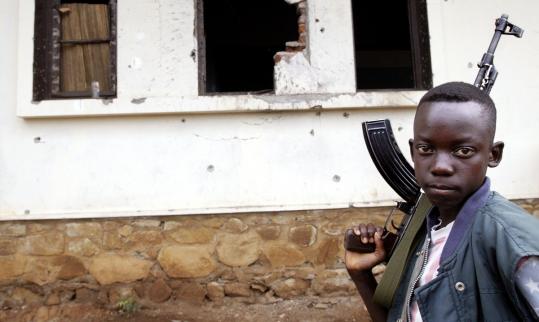 A child soldier for the Union of Congolese Patriots army in the years-long civil war-torn Democratic Republic of the Congo. (SVEN TORFINN/KRT/FILE 2003)
By Roger Atwood Globe Correspondent / June 21, 2011

Roméo Dallaire opens this study with an arresting image. An armed peacekeeper — one supposes it’s Dallaire himself, who led the United Nations mission that watched powerlessly as the Rwandan genocide unfolded — stands with his back to a village, protecting it from an approaching band of hostile troops. When he looks through his gunsight, he sees not men but masses of ragged children, armed with rifles and machetes. Pumped with a vile brew of ethnic hatred and drugs, they have come to attack these villagers.

No matter what we think, child soldiers are a brilliantly “effective weapon system,’’ Dallaire writes. Weapon of choice for warlords in some 30 conflicts around the world, mainly in Africa, children are fearless, don’t ask many questions and, thanks to the proliferation of small firearms, can carry and fire guns as well as adults. They can be easily manipulated with drugs and indoctrination, and just seeing them can unnerve opponents. “Child soldiers are a commander’s dream come true: the perfect low-technology, cheap and expendable weapon system, which can perpetuate itself ad infinitum,’’ he writes. To end the use of young combatants, he says, we need to first understand their appeal as a fighting tool to the adults who recruit them.

Dallaire writes from the earnest yet unsentimental perspective of a career military man. A retired lieutenant general in the Canadian army, he saw genocide up close and described it in “Shake Hands With the Devil.’’ Recovering from that experience took “constant therapy and an unrelenting regimen of medication,’’ he writes, and one wonders whether it wasn’t a desire to protect his sanity that kept him in this book from delving much into his own run-ins with child soldiers. After that first searing image, his subsequent descriptions feel a bit clinical and second-hand. About a quarter of this book is, in fact, a novelistic tale of a girl’s induction into an African child army, where adults feed drugs to 10-year-olds and turn them into human minesweepers and sex slaves, ending with the girl’s fatal encounter with a burnt-out peacekeeper who sounds a lot like Dallaire. He draws heavily on published accounts by former child soldiers, particularly Ishmael Beah, who wrote a harrowing war log from Sierra Leone in “A Long Way Gone: Memoirs of a Boy Soldier’’ and a foreword to this book.

Dallaire founded the Child Soldiers Initiative to wipe out the use of young fighters, and the tale of how he created this organization turns out to be the book’s strongest suit. He describes a series of agonizing conference-room clashes between army officers, who saw child soldiers as a military problem deserving lethal force, and humanitarian groups, who saw victims of horrible abuse against whom force should never be used. Dallaire fell somewhere in the middle, and his account of knocking heads together makes for an intriguing look into the inner workings of international humanitarian action.

For all his passion and experience, Dallaire leaves a few questions unanswered. For example, how deep are the historical roots of child soldiers in Africa? Are we dealing with an entrenched tradition, however sick, or is this a new phenomenon made possible by the spread of light, child-friendly weapons? Yet this is a book about solutions. To that end, Dallaire envisions a multipronged approach that would include military force to pressure armies away from using children, while keeping humanitarian groups in the lead on rehabilitation. He even sees former child soldiers as future leaders in their countries, using the skills they learned while fighting. That may sound like a stretch, but, as Dallaire recognizes, no humanitarian campaign gets off the ground without a little idealism.

Roger Atwood, author of “Stealing History: Tomb Raiders, Smugglers, and the Looting of the Ancient World,’’ can be reached at www.rogeratwood.com

The Global Quest to Eradicate the Use of Child Soldiers