THIS STORY HAS BEEN FORMATTED FOR EASY PRINTING
WAREHAM 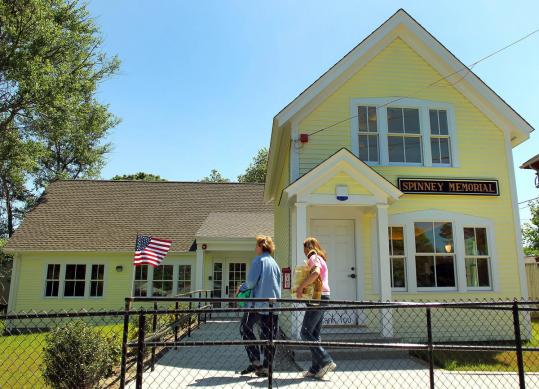 At the Spinney Memorial Library, patrons don’t need to sign books out. All donations are welcome to add to the growing collection. (John Tlumacki/Globe Staff)
By Christine Legere Globe Correspondent / June 19, 2011

WAREHAM — After shutting its doors some 65 years ago, the Spinney Memorial Library is set to reopen in a couple of weeks, offering summer and year-round residents Internet access and books on just about every subject imaginable.

The fully refurbished Victorian cottage, which now sports a sizable addition, will initially operate just as its pre-World War II predecessor did: as a book swap, maintained by the nonprofit Friends of the Wareham Free Library and staffed by volunteers.

Patrons will be on the honor system, with no sign-out of materials required. The expectation is that patrons will add some of their own books to the collection when they return with what they’ve borrowed.

Reading material isn’t all that will be available at the Spinney. The library will lend out fishing rods, and bait can be purchased at a hardware shop just around the corner. While such items may not be standard fare at most libraries, there are plenty of places to use fishing gear in this Onset section of town.

“It’ll be great for people who have come to visit for two or three days,’’ said Sandra Wheeler, a Friend of the Wareham Free Library and chairwoman of the fund-raising committee for the Spinney project.

The Spinney building was constructed in 1895 and operated as a small private library for its surrounding neighborhood until the mid-1940s.

“Once World War II started, people sent their books overseas to the soldiers instead of donating them to the library,’’ said Priscilla Porter, a member of the Friends of the Wareham Free Library and chairwoman of the Spinney Building Committee. After it closed as a library, the building served as a meeting spot for local civic groups, most recently the Girl Scouts.

The Friends group was offered free use of the cottage in 2005 by Spinney Inc. because that private group could no longer maintain the slowly deteriorating building.

“It was in poor condition when we got it, with aluminum siding and windows,’’ Porter said. Those have since been replaced with clapboard and wood frames more in period with the original exterior. Up to four layers of carpeting covering the interior floors had to be torn up.

The major restoration work began with the crumbling foundation. The building had to be hoisted up so the cement could be replaced. “The architect commented that he was amazed the building was still standing,’’ Porter said.

The $550,000 restoration and expansion of the Onset Avenue cottage, which now contains 1,900 square feet of space, was paid through large business donations, along with proceeds from lobster boils, ice cream socials, memorial brick and T-shirt sales, and other money-raising ventures.

Wareham’s Community Preservation Fund put $100,000 toward the conversion of the original Spinney building into a meeting room. The addition, paid for with other funds, contains offices and a large room with five Internet-wired computers and the book collection. The entire facility is handicapped-accessible.

One of the most enjoyable tasks for the Friends was the selection of the interior color, a tint called clamshell, set off with white woodwork and a white beadboard ceiling. “We all went to and got a bunch of colors in sample jars and painted them on the wall,’’ said Winna Dean. Clamshell was the clear winner — “because it makes you smile,’’ Porter said.

The Friends say the Spinney project has been a long haul, begun more than five years ago. “I thought we were going to die of old age before this was finished,’’ joked Wheeler. To date, the group has raised about $750,000. Public reaction has been enthusiastic, Wheeler said. “The community spirit is phenomenal.’’

One of the few tasks remaining is landscaping, and Wheeler said the Friends have scheduled a lobster boil for June 26 to offset the cost. “We’re planning to plant wildflowers instead of lawn,’’ Wheeler said. “We’re thinking of a butterfly garden, with some reference books to go along with it.’’

One recent Saturday, Wheeler and other Friends assembled shelves and loaded on books, while Spinney’s doors opened for a few hours to accept donations of reading material. Two summer neighbors, Mary Ann Mannetta and Pam Blaquiere, dropped by to donate a few bags of books and to check out the addition to their neighborhood. “We’re thrilled that we can now walk to the library,’’ Blaquiere said.

The Friends will run the Spinney Memorial Library until next spring, when they plan to ask the town to take ownership of the building at annual Town Meeting and make it a branch of the Wareham Free Library. Friends argue that the move would bolster the number of business hours the public library offers, and would help the library maintain certification with the Massachusetts Board of Library Commissioners.