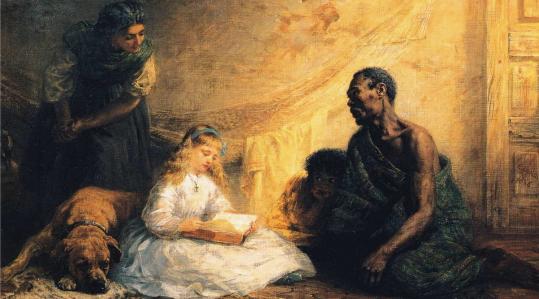 Once derided as a sensational, sentimental piece of antislavery propaganda, “Uncle Tom’s Cabin’’ has been admitted, more or less, into the American literary canon. Overcoming the sneers of mid-20th-century New Critics, the novel now stands alongside the works of Hawthorne and Dickinson. Certainly it has its mawkish moments and a tendency to preach — much like any book by Dickens — but the critical transition is essentially complete.

In “Mightier Than the Sword,’’ David S. Reynolds, author of acclaimed books on Walt Whitman and John Brown, aims to solidify the novel’s reputation, assess its immediate impact, and measure its long tail throughout American culture. He is most successful at reaching the first two goals, only partially so on the last.

Few would doubt Reynolds’s judgments that “no book in American history molded public opinion more powerfully’’ and that its creator, Harriet Beecher Stowe, was the nation’s most famous woman of her time. During the 19th century, her book sold more copies here than any other, save the Bible.

Born in 1811 into a family of preachers and social reformers, Stowe absorbed a Protestantism that abandoned Puritanism’s angry God for a more benevolent “Divine Friend.’’ In an era rife with spiritualism, she embraced a religion of angels, apparitions, and celestial bliss that eased the woes and sorrows of this world. These views would color her renderings of Uncle Tom and the dying girl Eva, her Christ-like figures of religious purity, one black, one white.

Reynolds argues convincingly that Stowe’s genius lay in packaging “daring ideas and images in conventional wrapping.’’ For example, she drew on female types then common in popular fiction, such as the adventurous feminist and the fallen woman, to enliven her narrative, but then reinvented them to create richer characters. Thus Eliza escaping to freedom across the icy Ohio River with her son acts as both loving mother and lawbreaker. “[E]ven the most degraded females’’ (including Cassy and Topsy), Reynolds notes, “attract our sympathy because they have an innate goodness that can flower as Christian virtue.’’

Stowe’s depiction of slaves took them well beyond stereotypes, endowing them with a wide range of character and emotion. Their comic antics and nonstandard English disguised plenty of intelligence and cunning. And Tom, far from a shambling yes-man, displayed, in Reynolds’s words, “perseverance in virtue’’ that blends goodness and power.

Overall, Reynolds writes, “Uncle Tom’s Cabin’’ pushed “antislavery arguments that had long been ignored or dismissed’’ into mainstream public opinion. Stowe’s popular novel, aided by staged versions applauded by illiterate white working men, accomplished what abolitionist diatribes could not. Via the concept of a Higher Law, it challenged the authority of the Fugitive Slave Act. In this sense, Stowe was indeed, as President Lincoln allegedly put it, “the little woman who made this great war.’’

Less well-known is the extended afterlife of “Uncle Tom’s Cabin.’’ In translations, it influenced Russian intellectuals to question serfdom and nudged Brazilians toward abolition of slavery. In the United States, the story’s hold on the imagination remained unprecedented; toward the end of the century, hundreds of touring companies mounted “Tom’’ shows across the United States. Unlike commentators who emphasize their accentuation of racial stereotypes, Reynolds focuses on the employment opportunities for black actors. Still, these productions often caved in to prevailing racist mores, diluting Stowe’s message.

The book’s success sparked an unabashed racist backlash as well, ranging from Joel Chandler Harris’s Uncle Remus tales to D.W. Griffith’s technically brilliant silent movie “The Birth of a Nation’’ (1915). What was at stake in this culture war, Reynolds observes, was the very meaning of the Civil War and the role of race in America.

These questions indeed preoccupied Americans, for they lie at the heart of our national identity. But Reynolds makes the mistake of directly tying many such 20th-century debates to “Uncle Tom’s Cabin.’’

Was “Gone with the Wind’’ really largely written “in reply to Stowe,’’ as he suggests? I don’t think so. The book arose out of a much larger conservative zeitgeist that yearned for cultural redemption. The same can be said for Alex Haley’s “Roots,’’ from the liberal and racially inclusive other pole.

As for “Uncle Tom,’’ that epithet for a black weakling who kowtows to whites, Reynolds points out that it was hardly an innovation of the 1960s. Early in the 20th century NAACP founder W.E.B. DuBois wielded it against Booker T. Washington because of his separate-but-equal policies.

“Mightier Than the Sword’’ deftly explores the social-intellectual context and personal experience out of which Stowe’s novel evolved into a grand entertainment and a titanic engine of change. If Reynolds strays off course toward the end, his book is nonetheless consistently enlightening.

Dan Cryer is author of “Being Alive and Having to Die: The Spiritual Odyssey of Forrest Church,’’ to be published this fall by St. Martin’s Press. He can be reached at www.dancryer.org.

MIGHTIER THAN THE SWORD: Uncle Tom’s Cabin and the Battle for America
By David S. Reynolds
Norton, 351 pp, illustrated, $27.95