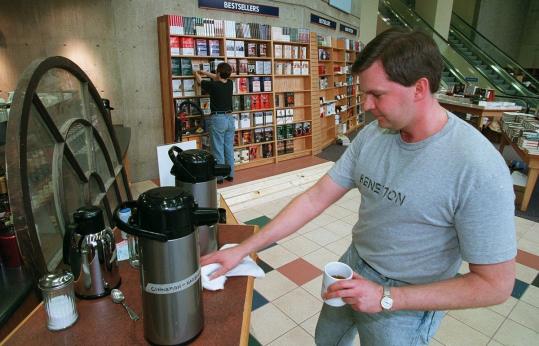 An assistant manager readied the cafe area of the Downtown Crossing Borders before its grand opening in 1996. The store is closing soon. (Mark Wilson/Globe Staff/File)
By Kaivan Mangouri Globe Correspondent / June 10, 2011

The troubled bookstore chain is closing its Downtown Crossing location as early as August, leaving a big, empty storefront in the heart of the city.

Borders, which filed for Chapter 11 bankruptcy reorganization in February, is in the process of shuttering, or has already closed, eight other stores in Massachusetts, including its high-profile Boylston Street store in Boston. Calls to Borders’s corporate office, in Ann Arbor, Mich., were not returned, and it is unknown whether the company will close any more stores in Massachusetts.

The state closures are among at least 220 Borders store closings nationwide this year. The retailer has struggled with weak customer spending and a lack of liquidity. In recent years, the chain overextended itself domestically and internationally and failed to reinvent itself quickly or dramatically enough to cope with industry changes such as the advent of the e-book, retail analysts have said.

Adding Downtown Crossing to the list of closures comes as Borders Group says it may have to close dozens of its best-performing stores due to a bankruptcy court requirement that it obtain extensions for its lease negotiations.

The closure comes as the city tries to revitalize the shopping district, which has become an eyesore after construction stopped nearly three years ago on the redevelopment of the former Filene’s department store site. Rosemarie Sansone, president of the Boston Downtown Business Improvement District, said there has been roughly $200 million in investment since the beginning of 2010 in the vicinity of the Borders store, demonstrating that the area is not in decline.

“The Borders store on the Freedom Trail is an anchor brand,’’ Sansone said. “We sympathize with the financial distress this national company is experiencing and know many loyal customers will be disappointed’’.

In April, Mayor Thomas M. Menino celebrated the opening of some 40 downtown businesses within the past year, including Chipotle and .

Mike Murphy of Clarendon Group USA, which leases the property to Borders, is already looking for a new tenant and has hired broker CB Richard Ellis.

“You never want to have a space where a tenant has difficulty,’’ Murphy said. “Sometimes [a closure] can be an opportunity, and sometimes not.’’

A Boston Redevelopment Authority spokeswoman said that while the closure is unfortunate, the three-story, 35,000-square-foot space will find many suitors.

“The bid is up and running,’’ Susan Elsbree said. “The district hasn’t looked better.’’

Peter Meade, director of the BRA, said he has been talking to potential retail, entertainment, and restaurant tenants.

Material from Globe wire services was used in this report. Kaivan Mangouri can be reached at kmangouri@globe.com.

Downtown Crossing through the years