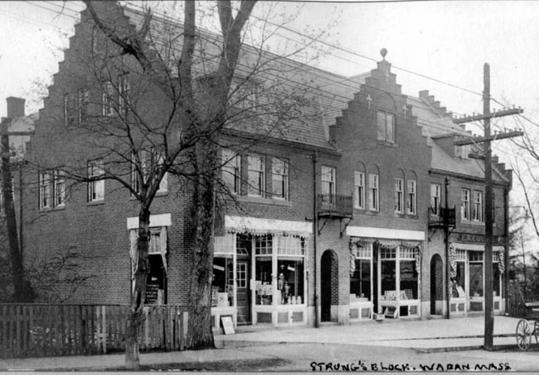 A Newton landmark, Strong’s Block on Beacon Street appears on the cover of George Nugent’s memoir, “A Waban Childhood.’’

WABAN HISTORY: In October 2006, George Nugent responded to a notice posted on the Waban Improvement Society’s website searching for those with knowledge of the Newton village’s history. When the planned book project didn’t materialize, Nugent worked with the local nonprofit organization to publish his own memoir.

In “A Waban Childhood,’’ the 82-year-old recalls the more formal clothes and customs of the day; notable people in his life, including his school crossing guard and the local policemen; typical school days, complete with the janitor shoveling coal for heat; BB gun adventures with his friends; the neighborhood’s geography and businesses, such as the shop where he bought penny candy; riding the railroad, which is now the MBTA’s Green Line; bringing dates to the Totem Pole Ballroom at Norumbega Park in Auburndale; and food rationing and window blackening during World War II.

Nugent graduated from Newton High School (the city’s only high school at the time) in 1946, and from Dartmouth College in 1950. After serving in the US Navy for three years, he and his wife raised their family in New Hampshire, Florida, and Maine. He has lived in Milton, N.H., since 2007.

Soon after he began working on the book in the summer of 2007, Nugent returned to Waban for the first time in about 35 years. Accompanied by his son, Stephen Nugent, he visited his childhood home on Annawan Road, and lunched in the square with Lauren Paul, his editor and vice president of the Waban Improvement Society.

“The saplings are giant trees now, and the woods and open fields that I remember got filled with houses,’’ Nugent said, “but other than that, the town looks pretty much like it did.’’

Nugent will be signing and discussing his book today from 11 a.m. to 3 p.m. as part of Waban Village Day, taking place at Beacon and Woodward streets. The 60-page book is available for $20 through the Waban Library Center, with proceeds benefiting the Waban Improvement Society. For more information, visit www.wabanlibrarycenter.org.

On Thursday afternoons for the past two years, Bloom has played acoustic guitar as a music-therapy volunteer in the hospital’s pediatric inpatient care unit. He created the position after witnessing the benefits of music therapy, which he attributes as a “turning point’’ in his younger brother’s recovery from surgery six years ago. Now 11, Aidan Bloom is a fifth-grader at the Charles River School in Dover.

“It’s such a good thing for people to be exposed to music,’’ Kevin Bloom said. “It can lift them up, make them feel better. When a kid goes from being completely out of it to feeling great again, it’s a big thing for me.’’

Bloom started out volunteering at Newton-Wellesley Hospital to fulfill a 30-hour community service requirement for his school, but then he just kept coming back, and has racked up approximately 64 hours.

One of only six people chosen for the hospital’s honor this year out of approximately 800 volunteers, Bloom plans to continue his role at Newton-Wellesley until he graduates from Rivers, and then find a similar position at college, he said.

“It feels like you’re really doing something when you use your spare time to help someone,’’ he said, “and it makes the world a better place.’’

Kerrigan, executive vice president of a commercial real estate firm, Grubb & Ellis Co., was honored for his commitment to the organization’s mission. His wife, Maryjane, has lived with type 1 diabetes since childhood.

Kerrigan has served on the board of directors for the foundation’s New England Chapter-Bay State Branch for three years. He is chairman of the foundation’s Corporate Council, whose goal is to increase support for its fund-raising events and programs, and he has organized multiple award-winning teams for Boston’s Walk to Cure Diabetes.

“I feel extremely humbled to have been named this year’s honoree for JDRF’s Hearts & Heroes Gala,’’ Kerrigan said. “I have personally witnessed how this extraordinary event has dramatically impacted JDRF’s funding.’’

CREATIVITY WITH COLOR: Emily Harvey, manager of Emily’s Gift Barn at Harvey’s Farm in Westborough, will be the guest speaker at a Westborough Garden Club program Wednesday.

Harvey will suggest color combinations using plant material, décor items, and unusual accessories during her talk at the garden club’s free monthly gathering, which starts at 7:30 p.m. at the farm, 120 South St.

ARTS ROUNDUP: Laura “Lola’’ Baltzell of Brookline is showing small collages and encaustic, or hot wax, paintings at the East Boston Open Studios from noon to 6 p.m. today at 80 Border St. in East Boston. The event features the work of more than 40 artists at three locations, including 100 Condor St. and 175 McClellan Highway. For more information, visit www.lolart.com.

Claire Burke of Arlington has a painting, “Capella dos Ossos,’’ on display in the Cambridge Art Association’s Northeast Prize Show through June 16 at University Place Gallery, 124 Mt. Auburn St. in Cambridge. Other works in the exhibition, which was juried by Theodore Stebbins, curator of American art at Harvard University’s Fogg Museum, are being shown in the Kathryn Schultz Gallery at 25R Lowell St. in Cambridge. To learn more, go to www.cburkeart.com.

Sculptor Jessica Straus of Newton will be exhibiting her works in a solo show, “Keep,’’ opening Wednesday at the Boston Sculptors Gallery, 486 Harrison Ave. in Boston. Her latest pieces incorporate antique bottles retrieved from the banks of the Merrimack River and other area waterways in combination with her signature wood carvings. A reception with the artist takes place Saturday from 4 to 7 p.m., and the show continues through June 26. For more information, visit www.jessica-straus.com.

People items may be submitted to Cindy Cantrell at cantrell@ globe.com.