In a new history, Henry Kissinger, like so many other Sinophiles before him, looks into the eyes of the Asian giant and sees a familiar worldview 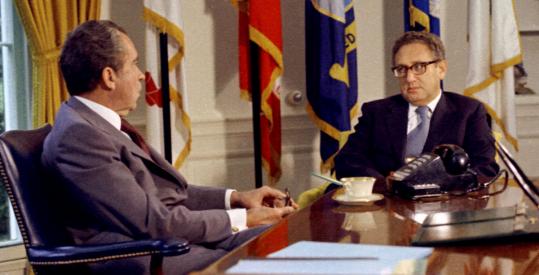 China: so odd, so old, so vast, and so distant that anything anyone can say about the place is bound to have been true somewhere, sometime. For the assorted dissenters and eccentrics of the West, Sinophilia, a dream about the other side of the globe, has never been far from self-love.

The Jesuit missionary Matteo Ricci made it to the Ming court in 1601 and took up the manner, garb, and language of a Confucian mandarin; convinced that the “Chinese rites’’ of ancestor- and emperor-worship were compatible with Christian conversion, Ricci led an accommodationist faction finally rejected by the pope a century later. From the Jesuits’ dispatches, Gottfried Leibniz found ideas that uncannily presaged his own — including binary arithmetic, which he traced to the divination text “I Ching.’’ In the same church reports, Voltaire discovered a Chinese “natural religion’’ to replace Christendom’s superstitions. In the 20th century, Ezra Pound’s rather sketchy fascination with Chinese characters became his own “ideogrammic’’ poetry.

For all these men, China was a harbinger of certain universal notions still stubbornly patchwork closer to home: Renaissance cosmopolitanism, counterreformation Catholicism, Enlightenment reason, literary modernism. But can we imagine a Sinophile whose one transcendental commitment is to the pointlessness, and dangerousness, of being committed to universal human values?

In “On China,’’ Henry Kissinger’s disturbingly entertaining history-cum-memoir, the sweep of Chinese history is drained of moral lessons for Western man. It is instead a playbook packed with the wily machinations and tactics of a team of Kissinger manqués.

There’s Zhuge Liang, an imperial chancellor from the third century A.D., who mastered the nuclear bluff with his “Empty City Stratagem’’: Facing overwhelmingly superior forces, the commander should open the city gates, let normal life continue, and assume “a posture of repose, playing a lute’’; the enemy will think he’s facing an ambush, and leave.

There are the diplomats of the disintegrating Qing empire: Wei Yuan, a midlevel mandarin, advised against contravening the humiliating treaty that ended the Opium War in 1842; instead the regime was to offer the same trade concessions given Britain to other Western powers, thereby playing “barbarians against barbarians.’’ Later, Li Honzhang, “for nearly four decades . . . China’s face to the outside world,’’ worked the foreigners with dexterity, infuriating court ideologues with his willingness to give up sacred territory and principles in stark cost/benefit analyses.

And there are, of course, the author’s own “interlocutors,’’ a term one suspects is the highest honor he’s apt to bestow on another man. Mao, Zhou Enlai, Deng Xiaoping, even Jiang Zemin: Often directly quoting transcripts, Kissinger recounts their subterfuges, feints, power plays, and most cold-blooded calculations of interest, with reverence. Finally, he seems to say, worthy adversaries.

The contrast is with the prim US sensitivities, whether anticommunism on the right or human rights on the left, that restrain the maneuvering of even its boldest emperors (Nixon) and cleverest mandarins (Kissinger). American exceptionalism is missionary, the reader is told; so was the Soviet Union’s. By the time of his 1971 opening to the West, Mao’s foreign policy had reverted from violent export of world revolution to the model of China’s deep past.

On this point, Kissinger fires a barrage of commonplaces with the gleeful exuberance, and intellectual slackness, peculiar to amateur Sinophilia: “China’’ in Chinese can be literally translated as “Middle Kingdom,’’ and “foreign nations’’ as “barbarians’’; thus Chinese rulers see no reason to export Chinese institutions since they imagine themselves at the center of the universe. Because Chinese officials pepper formal discourse with stock proverbs from Confucius and Sun Tzu, the ancient thinkers’ precepts of filial harmony at home and skillful misdirection abroad continue to deeply animate China’s state policy.

Such interpretive floridity doesn’t really distract from “On China’’ as a necessarily biased, but reasonably good-faith account of the Nixon-China rapprochement. But it does provide a certain psychological insight to the Kissinger-China dance since.

Indeed, as one of the American political class’s all-time great bogeymen, it’s easy to forget that Kissinger has been out of any real power since 1977. Among his most important policy roles since has been as a private-citizen go-between summoned to Beijing whenever relations with the American administration hits a rough patch.

By the end of the Ford administration, it can seem almost as if staid Chinese officials have realized the way to draw Kissinger closer to their national self-interest is to indulge the idea that, here in the mysterious Orient of cut-throat supplication and timeless ritual, he can engage in the graceful hard-bargaining of his great realpolitik precursors: Machiavelli, Metternich, Bismarck. This is a man who obviously loves baroque toasts and elliptical, portentous talk; the later transcripts have him speaking as if he were roughly translated from the Mandarin. (“Kissinger: No, it would probably have gone beyond the limits of calculation.’’)

It takes an archrealist, perhaps, to fall for the full flattery of fantasy.

Jonathan Liu, a writer living in Brooklyn, can be reached at liu.jonathan.c@gmail.com.