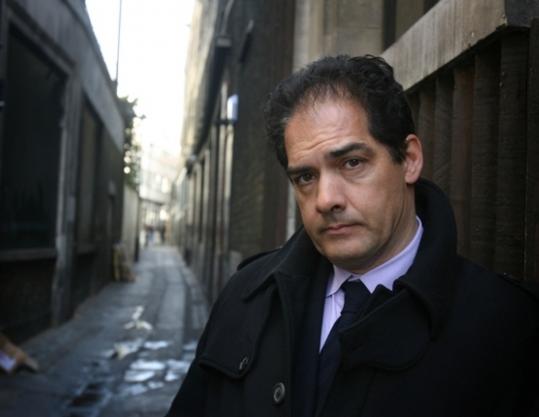 A. Quite often what I’m describing is really the dark side of my own character. So I could live with that — since I’m used to it. The question is whether other people are. What makes him bearable is his sense of humor.

Q. Back in his private-eye days, what would Bernie have thought of you as a client?

A. Hoity-toity Brit. Probably has a high opinion of himself because he’s a writer. But Bernie’s quite coin-operated, so if I was putting hard cash down that would cover a lot of sins.

Q. Ernest Hemingway’s house figures in the previous Bernie Gunther novel, “If the Dead Rise Not.’’ Graham Greene makes a fleeting appearance in “Field Gray.’’ Is this becoming a habit with you?

A. Well, I sort of think it’s too tempting not to do. I love walking on real-life characters. [Raymond] Chandler said that when he ran out of characters, he’d have someone with a gun walk on. I like to have a real person, like Hitler or Goering.

Q. Are authenticity and verisimilitude the same thing? Which is more important for you?

A. Obviously, the novels aren’t authentic. I have the benefit of huge amounts of hindsight. I can never know what it would actually be like to be a person in those times. I can imagine what it’s like, but that’s the best I can do. The assembling of small details that I go panning for, like gold, gives me the tools to help me get into that period. So from my point of view verisimilitude is as good as it gets.

Q. Bernie briefly winds up in a cell in Guantanamo in 1954. How much was today’s Guantanamo on your mind?

A. Very much. Being British, we tend to think of ourselves as America’s best friend. And as your best friend that gives us a little bit of license to point out things that could have been handled better.

Q. Toward the end of the book, Bernie speaks of “the unquestioning assumption of all Americans that they had right on their side.’’ Does that still apply?

A. I think it does. You’re discovering what we Brits discovered as the preeminent imperial power. It’s not easy being the world’s policeman. No one thanks you for it.

Q. Did you start out thinking Bernie would be a series?

A. Bernie started as a one-off. It was my publisher who said, “You’ve done all this work, so why don’t you do another?’’ I thought, yeah, that’s a good idea. Now, post-Stieg Larsson, post-J.K. Rowling, authors are encouraged to think in terms of series.

Q. Do you have an end in mind?

A. When I feel I’m repeating myself, I’ll probably pack it in. What will undoubtedly happen is I’ll write one too many. The important thing is to recognize when you’ve written too many and stop there.

Interview was condensed and edited. Mark Feeney can be reached at mfeeney@globe.com.