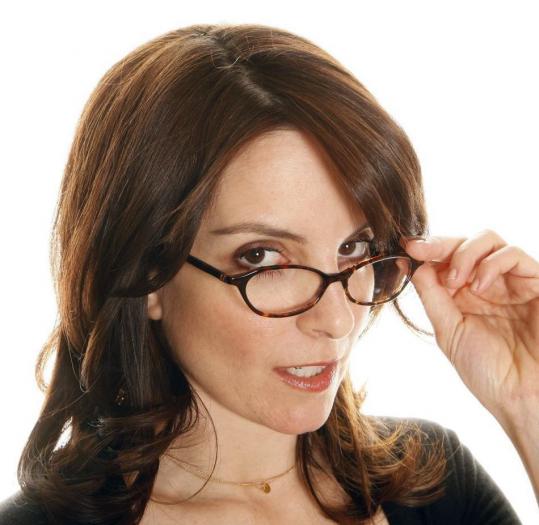 It would be easy to dismiss Tina Fey’s first foray into book writing, “Bossypants,’’ as the actress/writer/comedian/working mom (is there anything this woman doesn’t do?) merely trying to capitalize on what might prove to be the height of her popularity. Coming after her ubiquitous Sarah Palin impersonations during the 2008 presidential election, and with her hit NBC comedy “30 Rock’’ having recently been renewed through 2012, Fey is truly on top of her game. But whatever her motivation for writing it, the fact remains that “Bossypants’’ is an enjoyable, often hilarious peek into the mind of a well-liked celebrity, and one that offers a few talking points as well, particularly related to gender and fame.

Less a tell-all memoir than a collection of humorous essays, “Bossypants’’ — the title is the author’s description of her own management style — chronicles Fey’s life from her childhood in Pennsylvania (including an entire chapter devoted to her father and his quirks) through her present work as the creator and star of “30 Rock.’’ Some of the anecdotes from her childhood through college years, which encompass such events as her days at a summer theater program and working at a local YMCA, seem to have been chose a bit arbitrarily, but are amusing nonetheless.

For portions of the book, it’s hard to tell whether the narrator is Fey or her geek-chic “30 Rock’’ alter ego, Liz Lemon, whom Fey has admitted in interviews is at least loosely based on herself. Priceless photos of tragic haircuts and outfits (a “kickass white denim suit’’ is particularly memorable), and cringe-worthy recollections of Fey’s dating history suggest that her sitcom character may be even more closely autobiographical than she would like to admit.

The chuckles and outright laugh-out-loud moments come a dime a dozen throughout “Bossypants’’ which, at 275 pages of conversational writing, is a breeze of a read but it’s not all fluff. Fey has some serious points to make, particularly about being a woman in show business and being a working mother in any business. But her thoughts on issues like Photoshop (“Isn’t it better to have a computer do it to your picture than to have a doctor do it to your face?’’) and breastfeeding (“It really changed me as a woman, and it’s the most gratifying thing I’ve ever done. . . . Except for several very satisfying work-related things’’) are snuck in seamlessly, with the writing never becoming didactic. This technique has worked for Fey before — she summarizes an appearance as Palin, alongside Amy Poehler as Hillary Clinton, thusly: “You all watched a sketch about feminism and you didn’t even realize it because of all the jokes . . . Suckers!’’

Perhaps most importantly, Fey seems to be that rare breed of celebrity who can still maintain an Everyman persona without it seeming disingenuous. Even as she describes workdays that begin at 6 a.m. and end in the early morning hours the next day, one gets the sense that she understands the more absurd aspects of her demanding yet privileged lifestyle. A chart illustration, for instance, indicates that the daily stress levels of her writing and acting jobs fall far below those of other professions, including “Managing a Chili’s on a Friday night.’’ (The stress of acting on “SNL’’ is apparently on par with “Being a Baby.’’)

Readers who pick up “Bossypants’’ in search for salacious bits of gossip from Fey’s time at “Saturday Night Live’’ or in the Second City improv group in Chicago will be disappointed. But her insights into the whirlwind Palin experience are interesting, especially her thoughtful reflection on the then-candidate’s appearance on “SNL.’’ (“I couldn’t believe the condescension that was coming out of my mouth,’’ Fey admits at one point.)

It’s no secret that Fey, who wrote the screenplay for “Mean Girls’’ and was the first female head writer on “SNL,’’ considers herself a scribe first, an actor second. Comedic timing can be just as important in the written word as it is in verbal delivery, and “Bossypants’’ proves that she has a knack for both.

Liz Raftery, a freelance writer based in New York, can be reached at elizabeth.raftery@gmail.com.