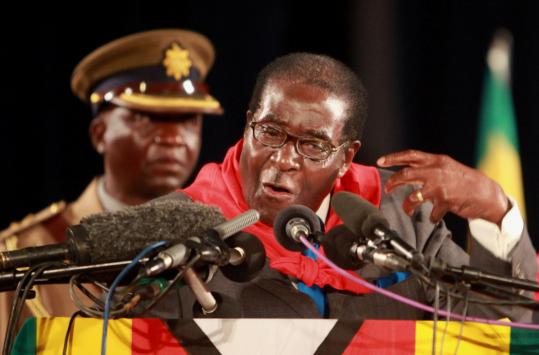 “The Fear’’ is utterly fearless. The book is littered with disturbing images of torture and rape. You can almost smell the sweat. The horror has congealed on the page into purplish bruises, blood-stained faces, broken bones.

A woman went out with one of her year-old twin boys to run errands. She came back to find her home ransacked. Her husband lay on the floor, a bloody dead pulp. The twin she had left at home also had been brutally killed. The thugs who did these things then raped her. Nearby, her other boy sat wailing.

This is life in Zimbabwe under the rule of Robert Mugabe. In power since Rhodesia became a majority-ruled Zimbabwe in 1980, Mugabe has been on his way out for many years. In the late 1980s when I first started visiting Zimbabwe, there was a faint hope that, like the many pre-1965 cars still on the roads, a dictator-for-life seemed an anachronism unlikely to survive long in a society as hip as Zimbabwe (Bob Marley famously played at their independence celebrations). In the mid-1990s, the coming of democracy in neighboring South Africa was expected to serve as a catalyst for change. In 2000, when Slobodan Milosevic resigned as president of Serbia amid mass demonstrations, was arrested and sent to The Hague to stand trial for war crimes, Mugabe became jokingly referred to as “Bobodan,’’ and many thought he might soon share Milosevic’s fate.

In his book, Peter Godwin covers the violence that engulfed Zimbabwe following a disputed presidential election in March 2008 and the subsequent run-off three months later between Mugabe and the head of the opposition party, Morgan Tsvangirai. Mugabe’s henchmen went to opposition strongholds and beat, displaced, tortured, raped, and killed tens of thousands of people who had voted for Tsvangirai.

“The Fear’’ is the third installment in an autobiographical trilogy that started with “Mukiwa: A White Boy in Africa’’ in 1996. One of the best memoirs to come out of Africa (and this is a sturdy and long list, as all you fans of the “I had a farm in Africa’’-type books know), “Mukiwa’’ covers Godwin’s childhood in rural Rhodesia and his time in the nation’s police fighting Mugabe’s guerrillas (Godwin was shot at and a car he was driving was blown up by a land mine). The book culminates with contrapuntal deaths, of his older sister who was killed in an army ambush, and of thousands of Matabele that Mugabe massacred in a reign of terror in southern Zimbabwe. The book is devastatingly brilliant.

His second memoir, “When a Crocodile Eats the Sun,’’ came out a decade later and picked up where he had left off in “Mukiwa.’’ (Godwin has another memoir, “The Three of Us,’’ written with his wife, Joanna Coles, about their becoming parents for the first time; blurb by Cindy Crawford.)

But while “Mukiwa’’ and “Crocodile’’ have the strong narrative thread of Godwin’s own story, with Zimbabwe’s political convulsions as the colorful, if beleaguered backdrop, “The Fear’’ twists in the hurricane winds of a country gone mad. His mother, now aging in London, makes a few cameo appearances, and his sister accompanies him on his trips, but he lurches wildly from outrage to outrage, victim to victim, trying to make sense of the senseless. There is a staccato-like propulsion: “The Fear’’ has 41 chapters, twice as many as his other two memoirs of about the same length.

He does dwell a bit on the travails of Roy Bennett, the white Zimbabwean who instead of being installed as a Cabinet minister gets jailed; Bennett appears in “Crocodile’’ as well. This decision highlights a larger problem with the book: There is not enough in-depth storytelling, especially about the black victims. Juxtapose this with Philip Gourevitch’s “We Wish To Inform You That Tomorrow We Will Be Killed With Our Families,’’ about the 1994 Rwanda genocide. Gourevitch focuses much of the book on one particular Rwandan and her story.

There are also minor errors (names are misspelled) and a lingering unease over the fact that Godwin now is a bit of an outsider, a person living in New York parachuting in to witness the horror and then flying home. In “Crocodile’’ he grappled with the meaning of exile with acuity and honesty, especially when he discovered that his father was not British but a Polish Jew who had lost a mother and sister in the Holocaust. In “The Fear,’’ the political overwhelms the personal and his family’s experiences feel hastily tacked on.

Moreover, the book, like “Crocodile,’’ is in the present tense. It is the literary equivalent of the handheld camera in a cinema-verité documentary. The faux-intimacy gets exhausting. The book is a scream of pain and needs modulation that only the past tense can supply.

There are other books about the catastrophe written by Zimbabweans, scholarly tomes by academics like Sabelo Ndlovu-Gatsheni and Blessing-Miles Tendi and memoirs like “The Last Resort’’ by Douglas Rogers about his white parents hanging onto their farm.

“The Fear’’ is still incredibly vivid and haunting and, sadly, timely. With the toppling of other longtime rulers at the other end of the African continent, there has been a revived hope that Zimbabwe too might get rid of its tyrannical dictator. Instead, in recent weeks, the United Nations has confirmed more intimidation, arrests and torture, and an opposition in retreat.

James Zug is the author of “Run to the Roar,’’ published in November by Penguin. He can be reached at jzug@earthlink.net.

THE FEAR: Robert Mugabe and the Martyrdom of Zimbabwe
By Peter Godwin
Little Brown, 371 pp., $26.99