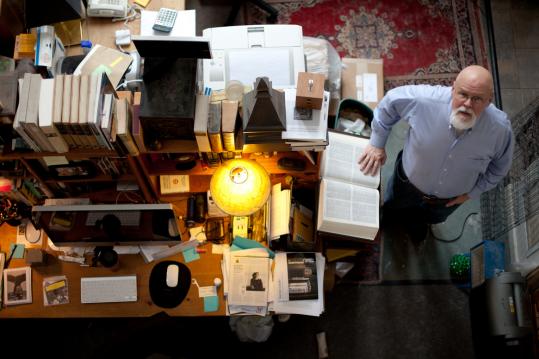 Barry Moser, professor in residence in the art department at Smith College, at home in North Hatfield. The printmaker and illustrator has done engravings for more than 300 books ranging from the King James Bible to Brer Rabbit to “Frankenstein.’’ (Matthew Cavanaugh for The Boston Globe)
By James Sullivan Globe Correspondent / March 20, 2011

NORTHAMPTON — There’s a wall in Barry Moser’s office at Smith College with dozens of framed degrees and honors. At the center of the array hangs a small quote:

“God will not examine our medals and diplomas, but our scars.’’

Scars, wrinkles, furrowed brows, and other imperfections are the stuff of life for Moser, the renowned printmaker and illustrator who has worked on more than 300 books in his prolific career. His latest, “One Hundred Portraits’’ (Godine), is a collection of engravings of writers from Shakespeare to Sylvia Plath, with detours into music (Sibelius, Bukka White the bluesman) and personal subjects, such as his late parents and his beloved Rottweiler, Rosie.

On March 26 the Brandywine River Museum in Pennsylvania opens an exhibition of Moser’s work: engravings, watercolors, and limited-edition books. Given the museum’s emphasis on American illustration, it’s a feather in an already well-plumed cap. In 1983 Moser won a National Book Award for his work on “Alice’s Adventures in Wonderland,’’ and he published his own spectacular illustrated version of the King James Bible two decades later.

Not bad for a man who has come to believe he grew up dyslexic. “I’m really interested in the irony of that,’’ says Moser, 70, a bespectacled, head-shaved Tennessee native with a tangy drawl and the sculpted white beard of a 19th-century judge. “I think I largely overcame it by setting type — upside-down and backwards.’’

Over the years Moser has done special editions of “Moby-Dick’’ and “Frankenstein,’’ portraits of Emerson and Thoreau for the covers of Robert Richardson’s biographies, and illustrations and watercolors for dozens of children’s books. His first foray into children’s literature was “Jump! The Adventures of Brer Rabbit,’’ an adaptation of the Uncle Remus stories co-conceived by the Baroque pop musician Van Dyke Parks in 1984.

At the time, Moser says, he thought children’s books “were beneath me — something Grandma might want to do.’’ He has since changed his mind completely. “I’m convinced the character of Brer Rabbit is no less and no more than the portrait of Beatrice in the ‘Divine Comedy,’ ’’ he says.

“I’m probably the only illustrator to have the King James Bible and ‘The Three Little Pigs’ on his desk at the same time.’’

As a boy, Moser spent more time with the gang from the old Archie comics than with anything resembling great writing. He put himself through college at Auburn and the University of Tennessee at Chattanooga with money earned as a Methodist preacher. Moving north to pursue graduate work at the University of Massachusetts Amherst, he realized he was not as religious as he had thought. He also confirmed that he was uncomfortable with some of the realities of his Southern upbringing.

Moser has been a New Englander for 40 years. “I’ve found my intellectual and political home,’’ he says. “I’m more comfortable here than anywhere I’ve ever lived.’’

Art Larson, who operates Horton Tank Graphics in Hadley, has done much of Moser’s printing for 30 years. He studied alongside Harold McGrath, a master pressman who bought his equipment from the artist Leonard Baskin. McGrath, who died in 2000, is featured in “One Hundred Portraits,’’ posed in his coveralls.

When the young Larson first walked into McGrath’s workshop, he stopped dead in his tracks. “All this old equipment, this beautiful framed stuff on the walls . . . I was completely galvanized,’’ he says.

Moser is no slouch as a printer himself, Larson testifies, though the artist himself dismisses his skill as “utilitarian.’’ Moser and McGrath’s patience in teaching the younger man the trade was remarkable, Larson says. For years, Friday afternoons were reserved for well-earned libations together.

“For me, it was a dream come true,’’ says Larson. “For all that Barry has accomplished, he’s pretty down-to-earth.’’

Moser’s three daughters from his first marriage all live within miles of his ridgetop home in North Hatfield, and he sees his 10 grandchildren all the time. He met his second wife, Emily, in December 1999, wooing her with a dozen red roses despite the fact that she’s allergic.

In the 1980s, inspired by Frank Lloyd Wright’s taste for Japanese architecture, Moser built his redwood house, with its wraparound porches and a 1,500-square-foot studio. Other than his wife, his companion is his second English mastiff, Roxanne, after 205-pound Ike died a few years ago.

Though he has made books his life’s work and can vividly recall listening to Caruso and Gershwin on his mother’s 78 r.p.m. records, Moser has little fear of the electronic revolution in publishing. His wife, who works in a bookstore, claims to detest e-readers, yet he recently caught her reading “Pride and Prejudice’’ on her iPhone.

Before their next trip to the Caribbean, Moser figures he will get himself a new iPad. He recently saw a full-color, backlighted e-version of “Winnie the Pooh’’ displayed on one of the tablets. When it was turned upside down, one character took a tumble.

“Knocked my socks off,’’ he recalls. Still, he feels confident it’s just another medium. “They’re not going to take the place of the printed book,’’ he says.

On the Smith campus, Moser is just about the only faculty member who can still get away with calling the students “girls.’’

“That’s gonna stunt your growth,’’ he says good-naturedly to a student taking a cigarette break on the sidewalk. There was a time when Moser lived more recklessly.

“I used to date Gustav Klimt’s great-niece,’’ he says. “Damn near burned down the Redwood forest together.’’

Now, however, he has begun to develop arthritis. Since a fall, he no longer mountain-bikes like he used to. And he has limited range of motion in his neck from an old football injury.

His determination to illustrate the Bible — the project took him almost five years — is a classic case of an artist lobbying for immortality, he freely admits.

“I think the word you’re looking for is ‘arrogance,’ ’’ says Moser, arching an eyebrow. “What can a [expletive] from Tennessee add to the Bible that Jerome, Aquinas, and Chagall have not already added?’’

Artists have the need to create, and to show their work, he says, recalling his irascible Uncle Bob, a craftsman who built so many birdhouses the family felt certain he was trying to insure his own immortality.

“Of course,’’ he says of the birdhouses, “there are probably none of them around anymore.’’

James Sullivan can be reached at sullivanjames@verizon.net.