The raw and the cooked

A writer and chef, Gabrielle Hamilton serves up savory bits on food and career, but on personal matters proves less than stellar 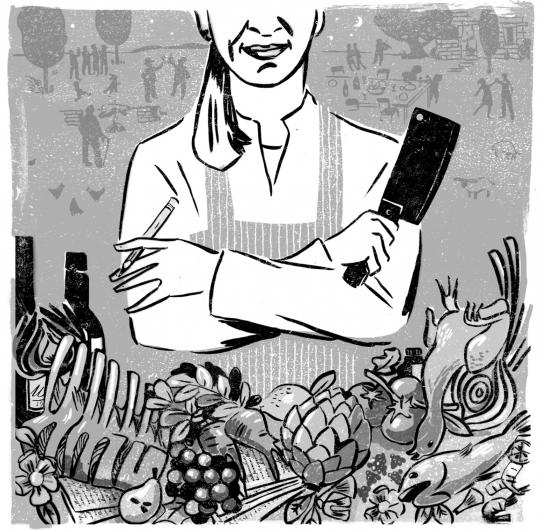 The blurbs on the book jacket are as effusive as an overboiling pot. “Magnificent. Simply the best memoir by a chef ever. EVER,’’ writes Anthony Bourdain.

“I will read this book to my children and then burn all the books I have written for pretending to be anything even close to this. After that I will apply for the dishwasher job at Prune to learn from my new queen,’’ adds Mario Batali.

Something about “Blood, Bones, and Butter’’ author Gabrielle Hamilton reduces hard-core chefs to gushing fanboys. Who in this food-loving world wouldn’t be smitten with the chef, owner, and loving tender of New York restaurant Prune? I’ve been a little in love with her myself since my first perfect meal there, of shrimp with anchovy butter and lamb sausage and I don’t really remember what else, only that it couldn’t have tasted nicer or been served by a more likable crew. I, too, was ready to swear fealty and wash dishes.

Hamilton writes nearly as well as she cooks, penning essays that are funny, contrary, lyrical, and true for Food & Wine, The New York Times, and other publications. There’s a lot of that spirit in this memoir, too. Hamilton tells tales in a macho, Bourdain-ian vein, about eating bone marrow as a child, killing animals, and engaging in various flavors of debauchery. She writes about working the brunch egg shift at 39 weeks pregnant, about scheduling the birth of her child after two staff members unexpectedly quit, if only to gain control over something. On a to-do list of items such as “Change filters in hoods’’ and “Figure out pomegranate syrup,’’ “Have Baby’’ falls somewhere in the middle.

But this isn’t a book about proving women chefs can run with the big boys, although it is often about being a woman chef. Badass “is the last thing I am interesting in being,’’ she writes (granted, after recounting a long string of badass feats carried out while hugely pregnant). “Badass is a juvenile aspiration.’’

At its core, “Blood, Bones, and Butter’’ is about falling in love with food, every day, over the course of a lifetime. It’s a romance.

Hamilton leads the reader through her story, starting with her childhood in rural Pennsylvania, where her French mother serves her wrinkly olives and stinky cheeses, and her artist/set designer father roasts lambs for an annual party that sounds too blissful to be true.

“Slowly the meadow filled with people and fireflies and laughter — just as my father had imagined — and the lambs on their spits were hoisted off the pit onto the shoulders of men, like in a funeral procession, and set down on the makeshift plywood-on-sawhorse tables to be carved. Then the sun started to set and we lit the paper bag luminaria, which burned soft glowing amber, punctuating the meadow and the night, and the lamb was crisp-skinned and sticky from slow roasting, and the root beer was frigid and caught, like an emotion, in the back of my throat.’’

All idylls end, this one abruptly. Hamilton’s parents divorce. On her own at 12, she lies about her age, gets her first restaurant job, and is off. “And that, just like that, is how a whole life can start,’’ she writes. She eventually travels the world, gets her master’s degree in fiction, falls in love with women, breaks up with women, breaks up with her mother, and through it all keeps working for restaurants, caterers, and summer camps. When she opens a restaurant of her own, it’s almost by accident: She runs into a neighbor who asks whether she’d like to see the abandoned storefront in his building. “Sure. I’ll take a look. Why not.’’ And that, just like that, is how a new chapter can start.

Hamilton’s writing about food is so vivid it could make you half-crazed with hunger, leaving you in front of the open fridge with a cold chicken leg in one hand and the book in the other. And she pens an engaging portrait of herself as a rapscallion evolving. But in and of itself, her story is less interesting than the language she uses to relay it. And when she dwells on personal matters, “Blood, Bones, and Butter’’ falters. Writing about her unlikely marriage to an Italian man with whom she has little in common, she drags the reader through page after page of grim detail. It feels, perhaps, a bit too fresh to yield real perspective — it’s not called “Blood, Bones, and Bitter.’’ It isn’t long before you’re flipping the pages in exasperation, thinking, “Just break up with him already!’’ This leaves the reader with a very good book more than a great, well-rounded one, but if it’s food and experience you’re hungry for, you’ll gush along with the fanboys.

As for running a restaurant, Hamilton romanticizes it about as much as she does marriage. We’ve all read enough books glorifying the business. The tide has turned. Now chefs remind us that a successful career means disposing of dead rats one day, appearing on “The Martha Stewart Show’’ the next. It means dealing with nutso neighbors like Arlindo, who floods Prune’s basement.

“You want to own your own little place? You want to have a tight relationship with your farmer? Surround yourself with poet-philosopher wine merchants? Make your own ricotta and cure your own lardo? You want to be chef/owner? It’s not the eighteen-hour days and the hot kitchen that’ll get you. It’s all that plus a half-naked six-foot-two, two-hundred-forty-pound man in front of your restaurant drilling holes into the basement and then watering his ivy.’’

We’ve been warned, but it’s the food world equivalent of a mother complaining about her children. Every gripe, in translation, means “I love you.’’