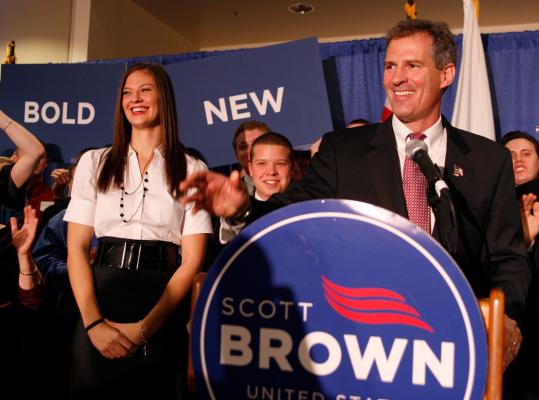 In “Against All Odds,’’ Scott Brown (pictured with daughter Ayla in December 2009 during his Senate campaign) details his difficult upbringing, including accounts of physical and sexual abuse, but doesn’t mention his party affiliation until Page 223. (Barry Chin/Globe Staff/File 2009)
By Craig Fehrman Globe Correspondent / February 25, 2011

The first thing to say about Scott Brown’s new memoir, “Against All Odds,’’ is that it’s not a political book. Now, obviously, it will make a political impact. (Last week, in fact, the Federal Election Commission ruled that Brown’s campaign can purchase and distribute copies, so long as those royalties go to charity.) But “Against All Odds’’ spends most of its energy on Brown’s personal story and very little on how those experiences shaped or gave significance to his political beliefs. It’s an incredible life story, told in the safest and most surface-level terms possible.

“By the time I turned eighteen,’’ Brown writes in his book’s first sentence, “I had moved seventeen times and lived in at least twelve different homes.’’ The senator, best known for his photo shoots and pickup truck, recounts the truly difficult circumstances of his childhood. If his book can feel repetitive, it’s because he faced the same struggles again and again. Brown’s father left early; his mother bounced from job to job and husband to husband. It’s the all-too-common story of a broken home, but worse. Brown remembers how one stepfather, a man whose hands had been mutilated in an industrial accident, “would jab at my eyes, my face, my neck, my stomach, my ribs, the sawed-off stumps of his fingers . . . nothing more than skin-covered bone.’’

Brown did enjoy some happy moments — visiting Pleasure Island with his grandparents, earning Cub Scout badges while he lived with an aunt and uncle — but the adults in his life tended, at best, to ignore him. That changed when he started playing sports, and Brown quickly became obsessed with basketball. Basketball led to a college scholarship, and Brown covers the rest of his athletic career, details respectfully his impressive list of romances, and chuckles at his start in politics. (He became one of Wrentham’s town assessors after his predecessor resigned because someone slashed his tires.)

These events prove to be far less gripping than his childhood, but Brown discusses them at a similar length nonetheless. He also discusses some experiences in a bizarrely literary fashion. Of his mother, Brown, who credits Lyric Winik with helping him “put my story into words,’’ writes, “Then there were the nights when she was simply gone, out for the evening with her friends to a club or a bar, where they laughed long and loud and left behind lipstick stains on the cigarette butts and liquor glasses.’’

These stylistic flights impede the book’s authority. At times, “Against All Odds’’ doesn’t sound like Scott Brown. Perhaps he and Winik were aiming for a more cerebral memoir, but they forget that such books require not only a searing style but a willingness to look inward. Like most memoirists, Brown packages his life as a series of conversion points: fighting back when his first stepfather beat him and his mother; conversing with a thoughtful judge; waking up from a one-night stand with “a New York Socialite.’’ But while Brown’s solutions — stepping up as a protector, never stealing again, leaving modeling to return to law school and the National Guard — are always commendable, he never tries to connect or make sense of them. Brown’s only insight seems to be: work harder.

And that’s what you’d expect from a typical political memoir. But while Brown lavishes four pages on his daughter’s “American Idol’’ run, he never revisits his 2002 comment that it’s “just not normal’’ for two lesbians to raise a baby. He doesn’t even mention that he’s a Republican until Page 223. He talks tough about Massachusetts’ “Democratic machine,’’ describing it as “governing by handshake, backslap, and quid pro quo exchanges, which isn’t governing at all.’’ But Brown doesn’t waste much time on alternatives. He calls for smaller, simpler government and strong national defense. The most thorough discussion of a piece of Scott Brown legislation comes in the context of a Martha Coakley attack. There are a few great anecdotes from Brown’s time in Washington, but only a few. (“Scotter, this is Joe, Joe Biden, the vice president’’: Thus begins one of Brown’s election-night phone calls.)

Now, to be fair, Brown hasn’t been there long. And he’d clearly like to stay. “Against All Odds’’ welcomes in voters and book buyers of all stripes but the latter constituency will be disappointed. The best political books create and sustain a narrative, whether it’s the optimism of John F. Kennedy’s “Profiles in Courage’’ or the empathy of Barack Obama’s “Dreams From My Father.’’ “Against All Odds’’ lacks this coherence.

When it comes to voters, though, the quality of the book can matter less than the quality of the coverage. And on this count Brown’s book — especially its brave account of his sexual abuse, two passages of about a half-dozen paragraphs each that have dominated his book’s rollout — is doing better than anyone could have expected. “Against All Odds’’ includes several elongated riffs on Massachusetts history — this must be the first political memoir to cite a history of Middlesex County written in 1880 — and they feel strange in what has become a national book. In December, Brown’s team promised a “mini-book tour’’ that would hit a few Massachusetts towns. Now, he plans to visit 16 cities around the country. “Against All Odds’’ may accelerate Brown’s ambitions. There’s more than one way to read his line about the truck’s odometer being at “213,000 miles and counting.’’

Craig Fehrman is working on a book about presidents and their books. He can be reached at craig.fehrman@gmail.com.

My Life of Hardship, Fast Breaks, and Second Chances